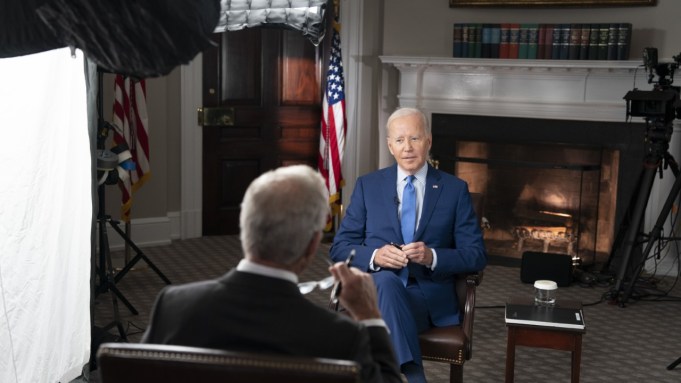 President Joe Biden said in a 60 Minutes interview Sunday that the Covid pandemic “is over,” one of a series of newsworthy items he said during a sit-down with Scott Pelley.

“The pandemic is over,” Biden said in a portion of the segment at the Detroit Auto Show last week. “We still have a problem with Covid. We’re still doing a lotta work on it …but the pandemic is over. If you notice, no one’s wearing masks. Everybody seems to be in pretty good shape. And so I think it’s changing. And I think this is a perfect example of it.”

Public health agencies still treat Covid as health emergencies, but the head of the World Health Organization was optimistic in his remarks last week. He said that “we’re not there yet, but the end is in sight.”

In the interview, his first for 60 Minutes since becoming president, Biden also addressed concerns about inflation, amid a sobering report last week showing a month-to-month uptick in the Consumer Price Index.

Biden told Pelley that the rise was “just an inch, hardly at all,” but Pelley then remarked, “You’re not arguing that 8.3% is good news.” That was a reference to the annual rate.

He added, “We’re in a position where, for the last several months, it hasn’t spiked. It has just barely — it’s been basically even. And in the meantime, we created all these jobs and — and prices — have — have gone up, but they’ve come down for energy.”

Biden also addressed the situation in Ukraine, where forces have recaptured large chunks of territory from the Russians. The president said that the U.S. would commit to Ukraine “as long as it takes.”

“Winning the war in Ukraine is to get Russia out of Ukraine completely and recognizing the sovereignty,” Biden said. “They’re defeating Russia. Russia’s turning out not to be as competent and capable as many people thought they were gonna be.”

Pelley asked Biden what he would say to Vladimir Putin if, because he is backed into a corner, he is considering using nuclear or chemical weapons.

“Don’t. Don’t. Don’t,” Biden said. “You will change the face of war unlike anything since World War II.”

Asked what the U.S. response would be, Biden said, “You think I would tell you if I knew exactly what it would be? Of course, I’m not gonna tell you. It’ll be consequential. They’ll become more of a pariah in the world than they ever have been. And depending on the extent of what they do will determine what response would occur.”

The president said that he has not made a firm decision on whether to run for reelection in 2024, even though he said he intends to do so.

“I’m a great respecter of fate,” he said. “And so, what I’m doing is I’m doing my job. I’m gonna do that job. And within the timeframe that makes sense after this next election cycle here, going into next year, make a judgment on what to do.”