John Madden, the exuberant, successful NFL coach who became a broadcast-booth legend at all “Big Four” TV networks, a popular pitchman and later lent his name to the wildly successful Madden NFL video game franchise, died today. He was 85.

“Nobody loved football more than Coach,” NFL Commissioner Roger Goodell said today. “He was football. He was an incredible sounding board to me and so many others. There will never be another John Madden, and we will be forever indebted to him for all he did to make football and the NFL what it is today.”

John Madden Remembered: 'Dearly Loved By Millions' & 'Nobody Had a Bigger Impact On The NFL'

A Super Bowl winner and the second-winningest coach in NFL history during a decade leading the Oakland Raiders, Madden retired from coaching when he was only 42 years old, citing burnout and health concerns. After a stint teaching at UC Berkeley, he moved into the broadcast booth, where he would make his most enduring mark.

“John Madden is a part of the very fabric of this league, and of the game we all love so much.”

The @NFLTotalAccess crew reflects on the legendary John Madden who died unexpectedly this morning. pic.twitter.com/V3ufq926qw

Madden became of the youngest coaches in NFL history when he took over the Oakland Raiders in 1969 at age 32, after two seasons as the team’s linebackers coach. He became the NFL Coach of the Year that season and led the Raiders to a Super Bowl title after the 1976 season. He would post a .759 career winning percentage over 10 seasons — among the best ever for coaches with at least 100 victories. His team also won 17 consecutive games during the 1976 and ’77 seasons, one short of the league record. He ended his career with a 103-32-7 record.

He was inducted into the Pro Football Hall of Fame in 2006.

“Coaching isn’t work,” his Hall of Fame bio quotes Madden as saying. “It’s more than a job. It’s a way of life … no one should go into coaching unless he couldn’t live without it … football is what I am. I didn’t go into it to make a living or because I enjoyed it. There is much more to it than just enjoying it. I am totally consumed by football, totally involved. I’m not into gardening … or any other hobbies. I don’t fish or hunt. I’m in football.”

Born on April 10, 1936, in Austin, MN, Madden began his coaching career as at Hancock Junior College in Northern California and was the defensive coordinator for San Diego State from 1964-66. As a player, Madden was drafted by the Philadelphia Eagles, but a knee injury during his rookie season ended his career. 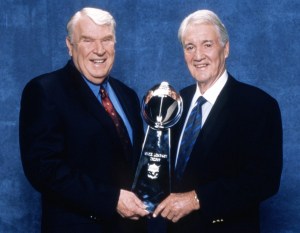 In 1979, not long after leaving the NFL sidelines, Madden joined CBS Sports as a color commentator. By 1981 he would join Pat Summerall on the network’s No. 1 NFL announcing team, and they be the CBS A-team until 1993, when Fox landed TV rights to the NFL. Madden and Summerall then joined the nascent network and team there until 2001.

Loud, smiling and often unkempt, Madden endeared himself to viewers in any number of ways. Among them was his penchant for pointing what goes on among “the big guys” on the line of scrimmage and freely deploying such shouted phrases as “boom!” and “whap!” He was a perfect foil for ex-NFL kicker Summerall’s generally lower-key play-by-play.

Madden joined ABC’s Monday Night Football booth in 2002, doing color commentary alongside Al Michaels. Then in 2005, Dick Ebersol lured the ex-coach to do color for NBC’s Sunday Night Football — making Madden the first sportscaster to work for all of the “Big Four” TV networks. He ultimately would call nine Super Bowl games, and his final assignment was Super Bowl XLIII for NBC in 2009.

Among he most famous shtick was when Madden would award a turkey leg to the best player in the Thanksgiving game he’d just called. As the gag aged, he added extra legs to said birdzillas to create a satisfying — if unappetizing — trophy turkey.

During his time in the broadcast booth, Madden would develop another following as a spirited pitched for Miller Lite, whose beer commercials of the 1970s and ’80s drew some of the sporting world’s biggest — or at least most colorful — names. Among the most popular, and, frankly, hilarious of these was the 1982 “all-star” ad that featured the “Tastes Great” and “Less Filling” sides in a hotly contested bowling tournament. The minute-long ad ended with Rodney Dangerfield getting no respect from the pins and then Madden “busting through” the screen to complain, loudly, “Hey! I didn’t get my turn!”

As if all that wasn’t enough for one sporting lifetime, Madden would become the first — or, rather, last name in sports video games.

The first version of Electronic Arts’ John Madden Football debuted in 1988, and EA Sports has released new version every year since 1990. Renamed Madden NFL in in 1993, the game has sold more than 100 million units and billions of dollars in revenue. Maming the game’s cover became a badge of honor for NFL players. It remains a strong seller annually, with Madden NFL 2022 arriving last August 31.

R.I.P. to John Madden. It was one of my greatest honors to grace the cover of your video game. Thank you for the years of joy and motivation! pic.twitter.com/4P4NKdC1gT

Not to be confused for the Oscar-nominated British filmmaker of the same name, Madden’s self-deprecating likability made him a favorite of documentarians, talk shows and, in one instance, music-video casting directors. He features prominently in U2’s American football-themed U.S. video for “Stuck in a Moment You Can’t Get Out Of.” The 2001 clip from the Irish band’s album All That You Can’t Leave Behind opens with Madden doing commentary for a “game” between the Lemons and the Flys. Watch the clip here: