The experts are weighing in on Laura Ingraham’s viral “Who’s on First?” routine, and they’re not fooled. Well, most of them anyway.

“Definitely a bit,” tweeted Penn Badgley, star of the Netflix hit You that appeared to flummox Fox News host Ingraham on Monday night.

And Andy Richter out it simply, saying, “The fact that people are actually laughing at that Laura Ingraham thing makes me feel like I’ve wasted the last 35 years of my life.” 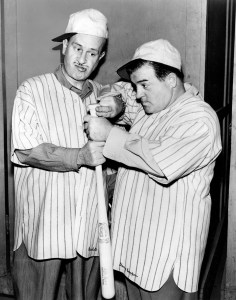 The “Laura Ingraham thing” is the viral video of Monday night’s exchange between the talk host and her frequent guest Raymond Arroyo, a conservative commentator who was bemoaning “woke storylines” on episodic television series. As an example, he cited “an episode of You where the subject of measles came up.”

“When did I mention measles?,” responds a seemingly sincere Ingraham. “I never had the measles.” (That should have been the hoax tip-off — he never said anything about having the measles.)

The classic Abbott & Costello routine devolved from there, with Arroyo finally shouting, “You! You! It’s called You!” and Ingraham fake-dumb asking, “There’s a show called Laura Ingraham on Netflix?”

Comic Jenny Johnson wasn’t impressed by the performance. “This might just be the worst version of ‘Who’s on First’ I’ve ever seen,” she tweeted. “I’m guessing Laura Ingraham never gets invited to game night… anywhere… ever.”

On the other side of the political spectrum, “Trump-endorsed” author Nick Adams figures Fox News got the last laugh. “Laura Ingraham was doing a bit like ‘Who’s on First’ on Fox News last night and the Democrat trolls on Twitter are too dumb to figure it out.”

But clearly not everyone was suckered, especially as the day wore on and skepticism gained a foothold.

“His delivery,” Badgley concluded about Arroyo, “is great tho.”

Definitely a bit. His delivery is great tho https://t.co/8UFfy7IpZf

Laura Ingraham was doing a bit like "Who's On First" on Fox News last night and the Democrat trolls on Twitter are too dumb to figure it out.