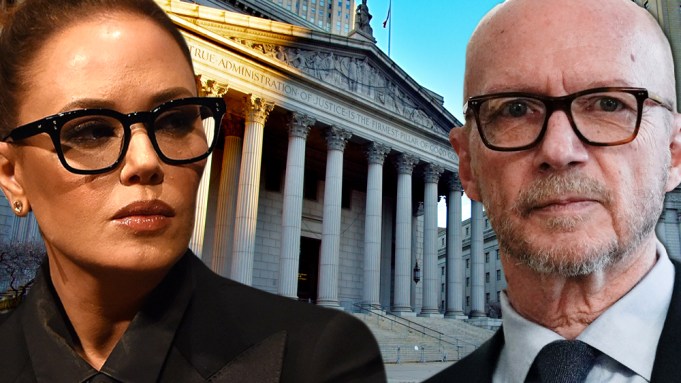 UPDATED with more details: Leah Remini testified Monday that Paul Haggis, and not his accuser, is the real victim in his New York sexual assault civil trial.

The former King of Queens star and host of the Emmy-winning documentary series Leah Remini: Scientology and the Aftermath – who, like Haggis, is a former member of the Church of Scientology — was the last witness for the Oscar-winning Crash filmmaker, whose lawyers rested their case on the trial’s 14th day.

Judge Sabrina Kraus sent jurors home after they heard from Remini, and from a retired spinal surgeon called by Haggis’ accuser, Haleigh Breest, to challenge his claim that he wasn’t physically capable of forcing sex on her.

Speaking over a live video link from Beverly Hills, Remini said that as a self-described advocate for survivors of abuse, she believes that rape victims deserve justice and their day in court. “However, in this case I believe it is Paul who is the victim here,” she said, echoing the defense claim that the litigation is Scientology’s revenge for Haggis quitting the church in 2009 and denouncing it in the media.

Remini, as far back as 2018, accused the church of a role in accusations by Breest and other women who came forward to allege the acclaimed Canadian filmmaker had sexually assaulted them. Haggis said at the time that he was the victim of a “public hanging.” On the stand this month, he said an investigative reporter told him of evidence that the church was attempting to blackmail and even kidnap women to induce them to fabricate allegations in support of Breest’s lawsuit. His legal team has provided no documentation of this claim.

The church has denied any role in the civil case, and Haggis’ lawyers agree there is no evidence that Breest herself has Scientology connections.

Remini and Haggis are allies in concerted media campaigns against the church they said dominated their lives, exalted them as accomplished public figures and coaxed large sums of money from them in donations — Remini through a memoir, the TV show and a podcast, and Haggis by sitting for interviews that turned into a widely circulated New Yorker article and then a book and an HBO documentary series about his journey through and out of Scientology.

Remini has said that until 2013, when she quit Scientology, she was a high-ranking church member and part of an “inner circle” of church leaders including its leader, David Miscavage, and prominent celebrity members including Tom Cruise. She testified that she knew and liked Haggis for his good work inside and outside the church and that his daughters went to a Scientology school in Los Angeles run by Remini’s mother.

Remini said she was “saddened” when Haggis publicly broke with the church in 2009 over disagreements including its support of a voter referendum in California opposing gay marriage. Remini said she wanted him to stay but that soon afterward, Miscavage and his chief enforcer, Tom Davis, were “looking for things to attack Paul [with].”

She said she was told to “disconnect” from Haggis — cut off all contact — because he was going to be labeled, in Scientology terms, a “suppressive person” or enemy of the church.

“I feel that Paul is a victim here of Scientology ‘fair game,’” Remini said, alluding to the church’s reputed policy of going all-out through litigation and covert means to discredit ex-members, like Haggis, who have publicly criticized Scientology. Remini and another trial witness, Mike Rinder — a former Scientology lieutenant and behavioral enforcer who served under Davis — co-hosted a podcast called Fair Game.

Both said on the stand that Scientology has tried to destroy them with campaigns of character assassination. Questioned by Priya Chaudhry, a lawyer for Haggis, Remini said that after she left, the church bought web domains incorporating her name and used them to post selectively edited information from her so-called “auditing” sessions — the Scientology version of confession using a purported lie detector called an E-Meter — dating back to her childhood to smear her.

Remini said she was 7 years old when her mother joined the church and the family moved from Brooklyn to Florida. Remini said she underwent her first audit at age 8 and had to “sit in a chair and learn not to react to sexual content and abuse.” She became an auditor herself as she rose in the church hierarchy, and she said that children routinely were asked for information of a sexual nature and also were persuaded to believe that they had committed abuses in previous lives.

“You were coerced into believing you were a man who had molested people,” she said. Those confessions then went into personal files.

Haggis has testified that he once saw a ceiling-high stack of his own auditing files and that, as someone raised in a working-class Catholic household in Canada, he confessed “everything” — suggesting that if he had admitted to rape or anything like it to an organization that demanded total disclosure and total loyalty, Scientology would have leaked those accounts.

Three of the four Canadian women who have testified in support of Breest say their own violent or frightening encounters with Haggis happened in the years before he quit the church and went to the media with his criticisms of its “cult” practices. Remini said that the last names of two of the women — who Deadline is not identifying — sounded familiar to her from her days in Scientology.

On cross-examination, Remini told a lawyer for Breest, Zoe Salzman, she had no evidence that the last names proved any connection between Haggis’ accusers and the church. “That wouldn’t matter,” she said, explaining, “You don’t need to be a Scientologist or affiliated with Scientology to be used by Scientology … to utterly destroy someone.”

Scientology’s effectiveness at hiding its role in payback operations is another recurring theme of the defense, in which the absence of hard evidence is frequently portrayed as proof of a dirty-tricks campaign.