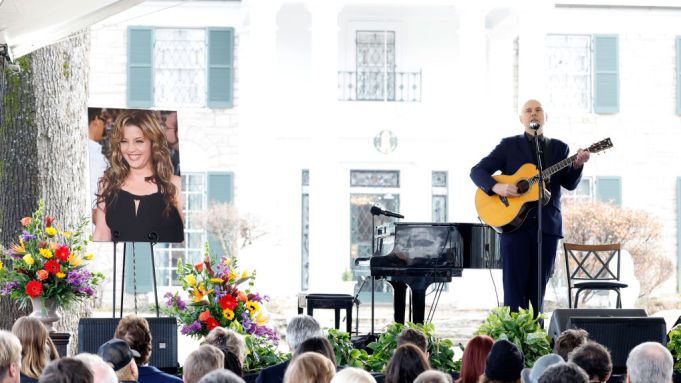 Lisa Marie Presley was remembered Sunday morning by her family, friends, and fans, all gathered at Graceland in Memphis, Tennessee. It was an emotional public memorial, with Elvis Presley’s ex-wife Priscilla, the mother of Lisa Marie, leading the tributes by reading a heartfelt family message during the ceremony.

Priscilla Presley shared a poem by one of Lisa Marie Presley’s 14-year-old daughters.

The poem alluded to a “broken heart” that hastened Lisa Marie’s death at 54. It was an inference to her son Benjamin’s death by suicide in July 2020.

At the end of the poem, Priscilla switched to her own message. “Our hearts are broken. Lisa, we all love you.”

Lisa Marie’s other daughter, actress Riley Keough, had her husband, Ben Smith-Petersen, read a eulogy for her. Riley shared memories of being driven to school by her mom with Aretha Franklin playing, and how she remembered the feeling of being picked up from school.

“Thank you for showing me that love is the only thing that matters in this world,” her eulogy concluded.

At the top of the service, film producer Joel Weinshanker said that Lisa Marie’s wish for her service was, “Don’t make it sad. Lisa we will try to honor you, try to honor your wishes.”

Performances were a major part of the ceremony. Guns N’ Roses singer Axl Rose spoke, then played a moving “November Rain” on the piano. Billy Corgan (performing “To Sheila,” a song he wrote with Lisa Marie) and Alanis Morissette (the latter performing her song, “Rest”) also sang, followed by the Blackwood Brothers Quartet, who sang gospel traditional “How Great Thou Art.” The memorial performances concluded with a song from Jason Clark and the Tennessee Mass Choir.

Lisa Marie Presley will be buried at the Memphis estate next to her father, Elvis, and her son, Benjamin. The livestream of the memorial ended with a message to donate to the Elvis Presley Memorial Foundation for a gift in Lisa’s memory.

Following the ceremony, a procession allowed fans to view her headstone, where they could leave flowers or other offerings, according to the New York Times.