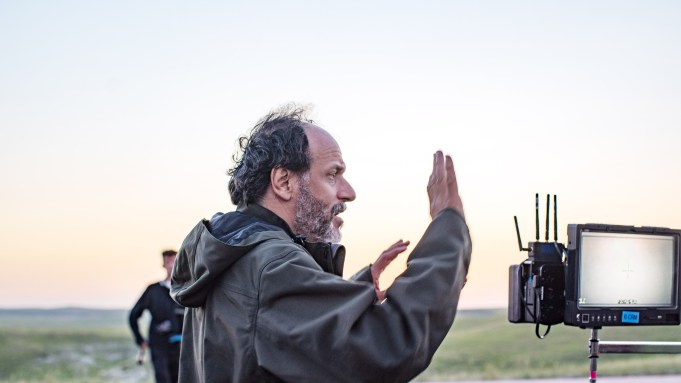 Luca Guadagnino on set of ‘Bones and All’
MGM

“I didn’t read the script as a horror script,” says Oscar nominated filmmaker Luca Guadagnino about his 1980s-set cannibal love story, Bones and All.

The pic, starring Timothée Chalamet and Taylor Russell as lost souls with a particular taste, who are roaming the flyover states, is gripping and topsy-turvy to the say the least. Mark Rylance plays a deadpan elder with a penchant for the flesh, taking creepy to a new level.

The United Artists Releasing title, which notched Guadagnino a Silver Lion at the Venice Film Festival and Russell the Marcello Mastroianni Award, hits theaters on Nov. 23.

Harry Styles' Fall Season Is A Sign Of The Times: From Onstage Extrovert To Complex Roles In 'My Policeman' & 'Don't Worry Darling'

“‘I love you and want to eat you’ — It’s almost as bananas as that,” says Guadagnino about the connection between amore and cannibalism.

“It’s part of our way of expressing our deep passion for something: ‘I love you to death. I will eat you because I love you so much or the metaphor of the wafer in the Catholic Church. It’s the metaphors that makes the idea of a terminal consumption reflecting the intensity of our passion,” adds the filmmaker who is also a producer on the film with Chalamet.

The screenplay by David Kajganich, who Guadagnino worked with on A Bigger Splash and Suspira arrived at an opportune time, proving cathartic for the director after he weathered the Covid lockdown, the loss of his father and the break-up with a lover.

“All that resonated in an unconscious way in the story of Maren and Lee,” Guadagnino tells Crew Call.

In addition, he talks about re-creating the 1980s in Bones and All as well as his electric collaboration with Chalamet.

And of course, Guadagnino wants to make more installments in the Call Me By Your Name series, that 2017 movie winning an Oscar for James Ivory’s Best Adapted Screenplay and getting a Best Picture nomination.

And as far as re-teaming with Armie Hammer on another installment, Guadagnino says, “Well, I think for me, it’s about these characters I love and so I would like to see all the characters back.”