2ND UPDATE, midday Friday: M. Night Shyamalan is looking at another No. 1 domestic opening with Old, which looks to be earning an estimated $6.5M on Friday. Including Thursday previews, it’s on its way to a $15 million three-day gross at 3,355 theaters.

If Old stays on track this weekend, it will rep the filmmaker’s sixth No. 1 debut after The Sixth Sense, Signs, The Village, Split and Glass. In a box office that continues to be ruled by brands, Old is a completely original film, which is important to note. That said, Old is also bound to be Shyamalan’s lowest wide-release opening at the domestic box office, charting below 2006’s Lady in the Water ($18M).

Paramount’s Snake Eyes is taking second with $5M for today and a $12.5M opening at 3,521 theaters. While Paramount provided a steady stream of Transformers movies between 2007 and 2018, G.I. Joe films have been spread farther apart, the last movie Retaliation being eight years ago.

On the theatrical-day-and-date homefront, Disney’s Black Widow looks to be down 60% in weekend 3 with $10.4M, while Warner Bros’ Space Jam: A New Legacy, after a $31.05M opening weekend, looks to be even lower.

UPDATED, Friday AM: Universal’s Old grossed $1.5M on Thursday night from 2,750 theaters that began showtimes at 7PM. This topped the Thursday night results for Paramount’s Snake Eyes: G.I. Joe Origins which did $1.4M, also starting at 7PM at 2,662 theaters. Both titles are respecting a theatrical window.

As far as who wins at the box office, Old or Snake Eyes, it’s a game of rock-paper-scissors between the studios as both pics are expected to land at the top of the charts with mid teen results. Old plays in 3,355 theaters today while Snake Eyes is booked in 3,521.

So far from 124 reviews, Old has clocked 56% Rotten. It’s actually a great movie to see on the big screen, but Shyamalan divides audiences with his clever endings. Old‘s RT is ahead of Glass (37% Rotten), but behind Visit (68% fresh) and Split (77% certified fresh). 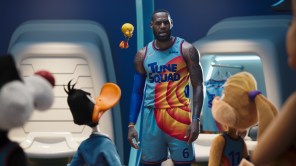 Warner Bros’ second weekend of Space Jam: A New Legacy and Disney’s third weekend of Black Widow, which are also available on their respective studios’ streaming platforms, could mess up the one-two ranking of Old and Snake Eyes. Space Jam 2 is expecting a 48%-58% second-weekend decline between $13 million-$16 million, while Black Widow‘s third weekend is figured at a 45% decline for $14M. Black Widow has been beating Space Jam 2 at the daily box office from Monday to Thursday. Last night, the MCU origin movie posted an estimated $2.3M to Space Jam 2‘s $2.06M; their respective running cumes being $143.1M and $41.9M.