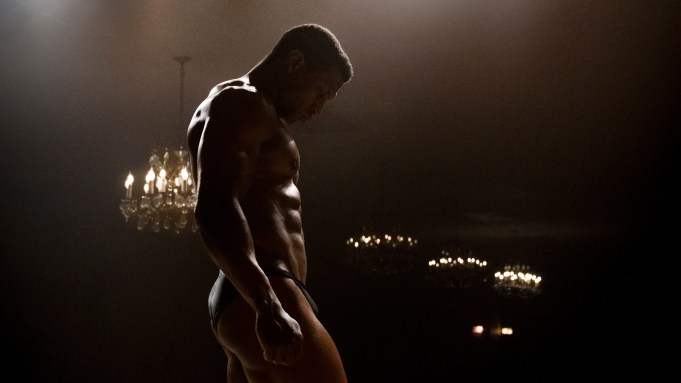 The film opens with a beautiful shot of Killian Maddox (Majors) showing off his chiseled physique under an orange hue of lights as if he’s at a bodybuilding competition. This is overlaid with a voice over of him having a discussion with his therapist having a discussion about his erratic behavior after a stint in the hospital. Killian takes working out very seriously and takes steroids to achieve the perfect body. He seems to be on the ASD spectrum and writes letters to his favorite bodybuilder Brad Vanderhorne (Michael O’Hearn) in hopes of hearing from him. He has no friends, only his grandfather (Page) whom he takes care of. There is Jessica (Bennett), a woman at the local grocery store who he has a crush on. He asks her on a date, but before she even responds he runs away because Killian is afraid of rejection.

It’s clear this man longs to bond with other humans, but his behavior is off-putting and borderline scary. He is prone to violent outbursts and destroys a local paint shop for not coming to repaint his grandfather’s house. After escaping from the scene Killian gets into a car accident, and he finds the steroids have created tumors on his liver, and is causing other organs to shut down. Knowing this information, he still refuses to get treatment.  His pursuit of winning his upcoming bodybuilding championship will come by any means necessary. Even if that means ruining every relationship or dying in the process.

Magazine Dreams is a deeply unsettling character study of mania. The audience is forced to watch every excruciating moment of an emotional breakdown that’s depressing to witness. Killian is so detached from reality, that his attempts to connect with it are met with disaster. He lies to himself, and others, and is angry that the world ignores his existence. He gets beat down by the world, and bottles up his feelings. Instead of expressing himself honestly, he takes it out on his environment  and destroys everything in his wake.

I’ve heard rumblings of people comparing this to Martin Scorceses’ Taxi Driver, but to me it resembles Ralph Ellison’s Invisible Man. The book follows a Black man as he navigates various factions of American society and fails. It is this failure that causes him to retreat inward. Would have been great if Magazine Dreams was more straightforward and cohesive as Ellison’s book. There are several moments when I thought the film was ending but it keeps going. This wore me out because this movie is relentless in its brutality and this treatment of this individual who just wants to be heard. It is this treatment and invisibility that has turned him into a raged filled pariah.

The editing by Jon Otazua is unhinged but serves a great purpose in showing us just how removed Killiam from the real world and it’s purposely hard to keep up. This doesn’t always serve the narrative though. There’s lots of fade to black moments which made me think the film was finally over but it just kept going. Instead of anticipating the next scene, I  began to wish for an ending. Not because the film is bad, or boring, but such an intense and exhausting experience.

Jonathan Majors is a revelation. It’s difficult to take your gaze off of him, the character demands it and the audience will be transfixed by it. The Killum Maddox is the type of characterization mostly reserved for White male actors. There are plenty of films if male loneliness, but something about his mannerisms and even vocal intonation is something I haven’t seen many Black actors get to portray. It’s the other characters that are troublesome such as Bennett as this caste wholesome woman, and Taylor Paige as sex worker. Both characters could have been cut from because we don’t need them to tell us how unprepared he is for relations with women. The audience can see that for themselves.

For the most part, Magazine Dreams is engaging, and Majors does all the heavy lifting. It’s worth seeing it for his performance alone.