Refresh for updates… Hollywood paid fast and heartfelt tribute to director Melvin Van Peebles today, with news of his death eliciting words of praise for the filmmaker from such industry figures as actor David Alan Grier and directors Barry Jenkins, Ava DuVernay, and Spike Lee, along with notable musicians and music execs.

“I Am So Saddened By The Loss Of My Brother Melvin Van Pebbles Who Brought Independent Black Cinema To The Forefront With HIs Groundbreaking Film Sweet Sweetback’s Badasssss Song(He Personally Signed This Poster To Me),” Oscar winner Lee wrote on Instagram. “Melvin Was A Big Supporter Of My Film Career. He Even Showed Up To The Set Of Do The Right Thing. Damn We Have Lost Another Giant!”

Oscar-winning Moonlight director Barry Jenkins wrote that the filmmaker “made the most of every second, of EVERY single damn frame.

“Admittedly,” he added, “while the last time I spent any time with him was MANY years ago, it was a night in which he absolutely danced his face off. The man just absolutely LIVED.”

Oscar-nominated director Ava DuVernay also paid tribute with a favorite quote of Van Peebles’: “You have to not let yourself believe you can’t. Do what you can do within the framework you have. And don’t look outside. Look inside.”

Then, there was Black List founder Franklin Leonard, who cited Van Peebles’ contributions as “Godfather of Black cinema, Godfather of (all) American independent cinema, and so much more.”

“We lost a true legend today in so many senses of the word,” said DGA president Lesli Linka Glatter. “Melvin Van Peebles was a cinematic icon whose bold and unapologetic work exploded on the scene, capturing the attention of our culture, inspiring the hearts and minds of so many, and influencing the work of countless filmmakers. Melvin was a constant presence at the Guild, always supporting and nurturing his fellow filmmakers. He also served on the Eastern Directors Council, and was proudly honored by the African American Steering Committee for his numerous contributions. Melvin’s mark on cinema will never be forgotten. Our thoughts are with his family and friends.”

See all reactions and full statements below.

The Sweet Sweetback’s Baadasssss Song filmmaker, actor, playwright, novelist and composer, often hailed as the Godfather of Black Cinema, died Tuesday night at his home. He was 89.

Deadline will share more reactions as they come in…

He made the most of every second, of EVERY single damn frame and admittedly, while the last time I spent any time with him was MANY years ago, it was a night in which he absolutely danced his face off. The man just absolutely LIVED pic.twitter.com/IIpfU8wI7q

“You have to not let yourself believe you can’t. Do what you can do within the framework you have. And don’t look outside. Look inside.”

― the iconic artist, filmmaker, actor, playwright, novelist, composer and sage Melvin Van Peebles, who has gone home at the age of 89. pic.twitter.com/36BQKzN9G7

Godfather of Black cinema, Godfather of (all) American independent cinema, and so much more. https://t.co/VYmLcinVbk 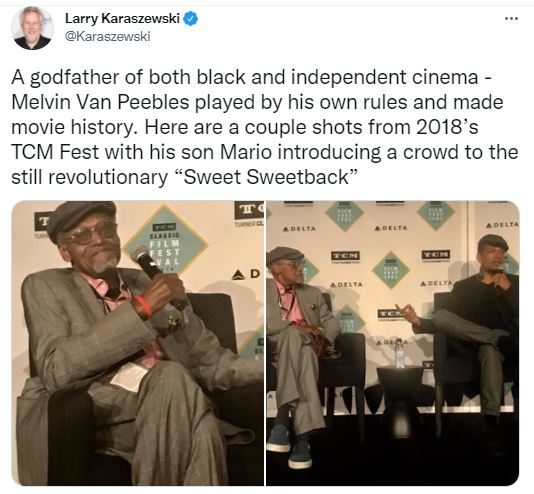 RIP Melvin Van Peebles, one of my favorite filmmakers, whose support changed my life when we met at a film festival 15 years ago. I will never forget him. Also no one could rock a vest / no shirt look like him.

Thank You KING 👑
It’s not only what you did but the times and circumstances you did them in.
Dignified Innovator.
A Filmmaker who was the essence and embodiment of indy film in “struggle times”.
The beauty is you lived to see the fruits of your labor birth and feed many🕊 pic.twitter.com/pcvPvR29CX

RIP the magnificent Melvin Van Peebles – a true Renaissance man across film, theater, music and literature, and one of the biggest life forces you could ever hope to encounter. It was an honor and pleasure to have him as a guest many times at @FilmLinc, followed by equally many a

Melvin Van Peebles was a king

📷 Melvin Van Peebles passed today. He was 89z a personal hero of mine, he invented independent black cinema and is often credit with the invention of Blaxploitation. I credit him with being a genius. I sampled his records, I loved Sweet… https://t.co/CMYlyYJqOQ

RATED X BY AN ALL WHITE JURY remains one the greatest taglines of all time, as well as perhaps the greatest act of rebellion against the MPAA we've ever seen. A true renegade. RIP Melvin Van Peebles.

RIP Melvin Van Peebles. Very influential filmmaker, one of the first independent filmmakers, inspired all of us. https://t.co/AYdZNG5lOW

We mourn the loss of the unparalleled Melvin Van Peebles. As the godfather of Black Cinema, he was a storyteller, artist, actor, filmmaker, #Sundance alum, & true visionary. With films like SWEET SWEETBACK'S BAADASSSSSS SONG he leaves behind a body of work that will stay with us. pic.twitter.com/z3BJpruEZa

“Melvin Van Peebles, an inspiration to a generation of filmmakers, passed. I had the honor of acting with Melvin in Jerry LaMothe’s movie “Blackout”. ln Melvin’s son Mario’s movie “Baadasssss!” about his dad as filmmaker, I got to see how the father had inspired the son. I had the great good fortune of benefiting from Melvin’s kindness, humor, and vast reserves of talent. There will never be another like him.”
— Saul Rubinek

To the ultimate baadasssss.

Thank you Melvin Van Peebles for changing the course of cinema.

Melvin Van Peebles, the filmmaking maverick of Sweet Sweetback's Baadasssss Song and more, has passed at age 89. R.I.P. to an icon. pic.twitter.com/DnCJw6P7di