Michael Lang, one of the co-creators of the legendary Woodstock Music & Arts festival series, has died at 77 of a rare form of non-Hodgkin’s Lymphoma at Sloan Kettering Hospital in New York City, according to his publicist.

In 1967, Lang dropped out of New York University and headed to Miami. There, he ran a head shop and promoted a series of concerts. including the 1968 Miami Pop Festival, which drew 25,000 attendees and saw performances by Jimi Hendriz, Frank Zappa, John Lee Hooker and more. .

He moved to Woodstock, New York and met Artie Korfeld, brainstorming the idea of a massive music festival that would celebrate the culture. That led to Woodstock, which was held at Max Yasguar’s farm in the Bethel, New York area from Aug. 15 to 18, 1969. The show attracted the cream of that era’s musicians, but was overwhelmed by the sheer number of attendees, estimated at 400,000. Traffic backed up and eventually, the producers decided to turn it into a free festival.

Lang was featured in many scenes of the 1970 documentary film, Woodstock: 3 Days of Peace & Music. 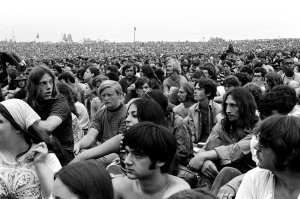 Woodstock’s major cultural impact was revived in the 1990s in 1994 and 1990 editions, with major concert promoter John Scher on board. The final Woodstock celebrated its 50th anniversary in 2019 with a three-day event that saw performances by Santana and John Fogerty.

In addition to his concert activities, Lang owned and operated Just Sunshine Records, a label that produced more than 40 albums by artists ranging from Karen Dalton to Mississippi Fred McDowell. He also managed such artists as Joe Cocker, Rickie Lee Jones, and Willie DeVille.

Lang is survived by his wife Tamara, their sons Harry and Laszlo, and his daughters LariAnn, Shala, and Molly.