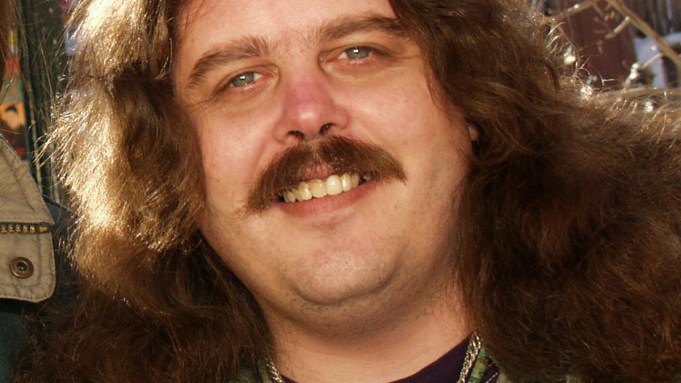 Mike Schank, a musician who was featured prominently in American Movie, the cult 1999 documentary that won a big prize at the Sundance Film Festival, has died. He was 53.

His close friend, Jackie Bogenberger, told the Associated Press that Schank died October 13 after a months-long battle with cancer. Several big-name actors and filmmaker mourned Schank on social media; read a sampling below.

Director Chris Smith’s American Movie premiered at the 1999 Sundance Film Festival and won the Grand Jury Prize — the first of several festival and critics’ awards and nominations it would glean. It centered on aspiring filmmaker Mark Borchardt’s attempts to finance his dream project by completing Coven, the low-budget horror short film he’d abandoned years before. Schank co-starred as his best friend since childhood, a guitarist and recovering substance abuser who was among the most reliable members of Borchardt’s crew.

He also provided a much-lauded scream for Coven whose recording was featured in the documentary. Watch a trailer American Movie below, with Schank’s scream at the 3:04 mark.

Schank’s deadpan delivery and aw-shucks charm made him a popular character, and he went on to land a handful of film and TV roles, most notably a guest spots as himself in a 2006 episode of Family Guy. Creator Seth MacFarlane cast Schenk and Borchardt in “Brian Sings and Swings” as part of Quagmire’s filmmaking team who attempt secretly to document interaction between Meg and her new friend Sarah, who is part of an afterschool club called the Lesbian Alliance.

Schenk and Borchardt also appeared in the 2002 indie comedy Britney, Baby, One More Time. Schank had bit roles in other features including Black Licorice, Hamlet A.D.D., Small Change, Modus Operandi and a couple of short films. He tweeted in August that he’d been clean and sober for 27 years.

Borchardt tweeted a brief remembrance of his friend, which garnered about 4,000 likes and scores of comments:

A number of celebrities also remembered Schank on Twitter:

RIP Mike Schank. Watch him in AMERICAN MOVIE and learn how to be a good friend. pic.twitter.com/6AIgStzOBz

RIP Mike Schank. I didn't know this guy but man was he a cool friend. Let's all watch #AmericanMovie this weekend – one of the all time great docs and super inspiring if you love film-making and film-makers. 🎸🎬 pic.twitter.com/bAlU2LPCfM

RIP Mike Schank, the sweet funny soul at the heart of the extraordinary doc 'American Movie'. Me, Simon & Nick were obsessed with it and since they included Mike's home number on the DVD extras, we called him from London one night. If you've never seen it, please do immediately. pic.twitter.com/RCWm3uBAZz

RIP Mike Schank. Watch him in AMERICAN MOVIE and learn how to be a good friend. pic.twitter.com/6AIgStzOBz