Season one of AppleTV+’s The Morning Show ended arguably with Covid, and so does season 2. Jennifer Aniston’s anchor Alex Levy literally goes on air as she battles the virus, for what is a cathartic monologue before her viewership in the wake of being “canceled” following Maggie Brenner’s tell-all book about the host’s affair with her morning show co-host Mitch Kessler. 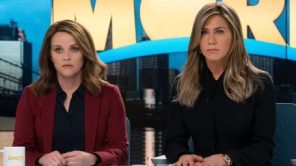 If you remember back on the season one finale, which dropped on Dec. 20, 2019, The Morning Show EP Kerry Ehrin was quite prescient about the invasion of Covid as Reese Witherspoon’s Bradley Jackson reports on a Papua New Guinea bound cruise ship which is delayed at port for four days of quarantine, carrying 5K passengers. Season 2 of The Morning Show takes up through mid-March, just as the world is locking down and the UBA brass are discussing how to work home remotely, something Alex’s devoted producer Chip Black (Mark Duplass) has already figured out.

“Fever” doesn’t leave us with any great cliffhangers heading into season 3, and Ehrin tells us why that is. She could have easily left us hanging at the end of Episode 9 when we first learn that after Alex was canceled, she’s got Covid. A big pivot tonight is that UBA boss Cory Ellison (Billy Crudup) expresses his deepest love to Bradley; this after her lover, Laura Peterson (Julianna Margulies) offers her to move out to Montana to live with her, leaving her TV hosting life behind.

An interesting dangler is Mitch’s documentary filmmaker lover Paola (Valeria Golino) with the last confessional footage of the infamous anchor. She crashes Cory’s office, and immediately gets his attention with it, the executive telling her the footage is a “living monument for humanity’s capacity for good,” high praise and insight for a season that has examined cancel culture and whether or not the mass media can reverse it, for better or for worse.

Here’s our conversation with Ehrin. Note, Apple has yet to announce a season 3 pick-up of The Morning Show.

I once heard Jenji Kohan say in an interview for Weeds, that her last episode of a season serves as the first episode of the next season, while the penultimate episode is really the finale of the current season. With the audience learning of Alex’s COVID at the end of Episode 9, you could have ended the season there and left us hanging.

Kerry Ehrin:  I didn’t ever think of that as an ending. One of the really interesting things about doing this job is seeing how other people interpret it, react to it, and respond to it emotionally. It’s really interesting to me, and it’s cool, but I always felt like we needed a landing place for Alex emotionally, for Bradley. I’m not really a writer that lives in cliffhangers. I do them to some extent because they’re great, they have a purpose, but I really feel good emotionally about what I’m doing, when I need to land it. I need to land the plane a little bit.

One of the main themes this season was cancel culture and analyzing that. What was your feeling about cancel culture as Mitch and Alex dissected it. How do we get the overall society to forgive someone?

Ehrin: I don’t think it’s that severe of a thesis. It’s just looking inside of various aspects of it, and really raising questions, different points of view because it’s all so complicated, and I think sometimes –and I’m not talking about cancel culture, I’m talking about issues in general– we have a tendency to put them in a box and say ‘This is what that is’, and I feel like as human beings we’re very complicated and messy creatures with so many conflicting impulses for self-preservation, for wanting to be morally a good person, for wanting to succeed in the world. All of these things are all at play all the time in everybody, and I was really more interested in looking at that aspect of it than making some sort of definitive statement about culture.

Laura talks about her lifestyle being outed and then facing rejection by those in the news industry, similar, but not exactly like what’s occurring with the backlash Alex is facing with the media. Can you expound on that?

Ehrin: You can equate them by saying it has to do with the rejection, your rejection by society. 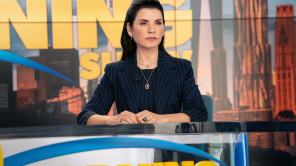 Which I think is — I believe shunning is considered one of the most psychologically abusive forms of punishment. People need to feel community and a presence of being in a community for their mental and emotional health. So, it’s interesting from that perspective, although I think it’s very different. They’re pretty different circumstances, one being Laura did not do anything wrong, and Mitch did a lot of shit wrong, you know?

Mitch’s story isn’t about, it really isn’t about cancel, you know, ‘boo-hoo’ cancel culture, poor Mitch, in any way. His story was about Mitch the human who had lived his life in a state of denial, who had believed he was a good guy, who lived in a bubble that was supported by all the people who worked around him, and when that bubble burst and when he had to look at who the world thought he was now, he had to reconcile that inside of himself, and his story is really about his internal journey of walking through the rest of his life as this person he doesn’t want to be and having to ultimately acknowledge that he was responsible for those actions. Whether or not he at the time was thinking, ‘Oh, I’m going to use my power to get this girl in bed,’ he wasn’t. He was in denial. He thought he was like the most attractive man in the world because he bought into his own PR, and that women liked him. He wasn’t looking at it from an honest place, and I think once he is looking at it from an honest place, it’s not easy to live with.  And it kind of leaves him painted in a corner because he doesn’t want to accept that that’s who he is, and yet, he is slowly realizing that is who he is.

In the timeline for this season, you brought events up to mid-March. How deep do you plan to go in season 3? Are you going to walk us up to the Capitol Riots? Or will there be some huge time jump?

Ehrin: I don’t know at this point. My instinct is there will be a time jump.

In regards to dangles for you, what do you want to see in season 3? What are you curious about? 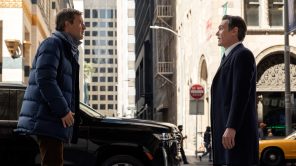 Ehrin: Well, I definitely want to see more of Bradley and Laura. I feel like Alex has come to a place for the first time since the pilot of accepting who she is and facing her worst fears, and I want to see how the phoenix rises from the ashes for her, and learning how to have a full life and be present and loving. I know these don’t sound like big, hooky plot points, but this is how I begin a story: I begin from what I see inside the character and what I want to experience next with them, and I feel like Alex deserves that at this point. I’m curious where the fate of UBA is going. I love the Cory-Stella relationship. I think they are a great story about sort of the transition of the old world and the new world, and I think they’re both just such rich characters, and I’m excited to see how they develop. 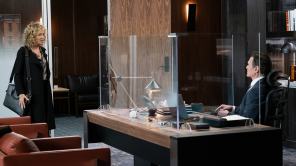 Valeria Golina as Paola and Billy Crudup as Cory.

Paola’s footage of Mitch – do you think it will ever bubble up again?

Talk about Alex’s arc. At the end of season one she was breaking news about Mitch and the network, and here she is signing off with “Stay safe, stay sane, I’ll see you later.”

Kerry Ehrin: It starts in the pilot. She was a woman who was not paying attention to her own emotional life because of her career, and she put everything into the career. You know, her marriage was not good. She wasn’t really happy. She was happy, she was just so busy that she didn’t think about it. She has this very successful partnership with this person who then essentially falls through the floor and has done these horrible things, and then it really causes a crack in her foundation that sends her down a road of self-evaluation. It’s sort of a push and pull between denial and self-evaluation and truths that keep bubbling up, and when she gets on the air at the end of the season, it wasn’t like that was a conscious decision. It wasn’t like she sat down and said, I decided this is the right thing to do and I’m going to talk about this on air. It was very much an emotional and impulsive, almost a breakdown in the moment of her coming to terms with some of these truths she didn’t want to look at, and because it was really in a way a kind of vomiting up of her truths. It was such an emotional outburst for her; her character so careful and guarded.

It was hard for her to wake up the next day and be comfortable with it. And that’s why she left the show. I think she felt like there were so many things she couldn’t put in a box that made sense to her, so she just fled. I think she ultimately really missed working, and then her arc this season is about a person who wants to be vital again, but has these ghosts that haunt her because now after kind of having this emotional, impulsive breakdown where she spoke these truths, the public has made her a hero. Her whole thing this year is like, ‘I’m not a hero’ is her inside. She can’t allow herself to run with that because she doesn’t believe she is a hero. A lot of things are coming out this season about her past that weren’t intentionally bad, but in the moment were thoughtless. It was something that came out of her mouth. It was her trying to manage a situation. I think she’s really haunted by these ghosts, and Alex is a person who, she won’t stay in denial. She’ll stay tough. She doesn’t want to think about it. She gets cranky. She gets pissy. But when she lets it in, it really sweeps over her like a tidal wave.

And to me, that’s what 10 is about is just this person who has been through so much emotionally and internally and has come to a point where’s she’s gotten washed up on the beach, and is just picking herself up. That to me is where we end it, and I’m really very proud of it.

Outside of The Morning Show, under your Apple deal, is there anything else that’s percolating for you?

Ehrin: I’m circling a few things right now that I’m very excited about, but they’re not official yet, so I can’t talk about them. But yeah, I definitely want to be doing more development. Obviously, doing a season of the show, which is already a complicated show, doing it during a pandemic was quite something.