The inspirational Gay Chorus Deep South will make its broadcast premiere Sunday, December 20 at 9:00 PM ET/PT on Pop and Logo and Pluto TV.

Directed by David Charles Rodrigues and produced by Bud Johnston and Jesse Moss for MTV Documentary Films’, Gay Chorus Deep South tells the story of the San Francisco Gay Men’s Chorus as they embark on a tour of the American Deep South. The journey came in response to a wave of discriminatory anti-LGBTQ laws and the divisive 2016 election.

Led by Gay Chorus conductor Dr. Tim Seelig and joined by The Oakland Interfaith Gospel Choir, the tour brought a message of music, love and acceptance to communities and individuals, while confronting intolerance. 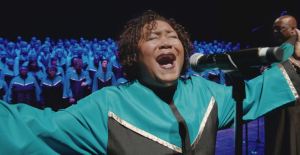 Over 300 singers traveled from Mississippi to Tennessee through the Carolinas and over the bridge in Selma. They performed in churches, community centers, and concert halls in hopes of uniting Americans in a time of difference. The journey also challenged Seelig and other Chorus members who fled the South to confront their own fears, pain and prejudices on a journey towards reconciliation.

The conversations and connections that emerge offer a glimpse of a less divided America, where the things that divide us—faith, politics, sexual identity—are set aside by the soaring power of music, humanity and a little drag.

Gay Chorus Deep South made its world premiere at the Tribeca Film Festival, where it won the Documentary Audience Award. The film also won awards from many other film festivals.

The film is executive produced by James Goode and Tony Högqvist.