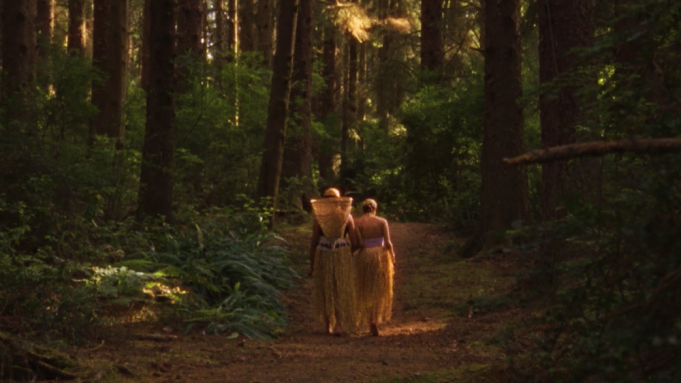 EXCLUSIVE: The award-winning documentary Long Line of Ladies, about a 13-year-old Native American girl’s coming of age ceremony in the Karuk tradition, will premiere on the New York Times Op-Docs channels Tuesday, the first day of Indigenous Peoples Month.

The film directed by Shaandiin Tome and Oscar winner Rayka Zehtabchi offers an intimate look at the experience of Ahtyirahm “Ahty” Allen, a member of the Karuk Tribe of Northern California, as she prepares for her “Ihuk” or Flower Dance – a once-dormant ceremony that “takes place after young women in her community have their first period.”

As part of the ceremony, Ahty will fast for three and a half days and wear a taáv, a kind of feathered veil obscuring her sight, for four days. The 22-minute long film doesn’t show the actual ceremony itself – “the filmmakers refrained from filming the event out of respect for the traditions of the community and the privacy of the participants,” according to a release about the film. But it shows the steps taken by Ahty, her family and community members leading up to the moment she embarks on her journey, symbolically marking her entrance into womanhood.

“You’re blinded for four days and you’re reflecting on your inner self,” Ahty’s father explains to her about the ceremony, as he hand crafts the feathered blinder. “Then we remove your taáv and you’re reborn as a woman.”

“The ceremony was held for generations without interruption,” text on screen at the beginning of the film states, “until the violence and destruction brought on by the Gold Rush, where Native American girls and women were victims of sexual violence.” A group of Karuk people revived the tradition in the early 1990s “to once again honor their girls as they transition into womanhood.”

Regarding its Oscar eligibility, a release noted, “If the film were to receive an Academy Award nomination, Tome, who is from the Diné community, would become the first-ever Native American director to be nominated.”

“This film has served as a vessel of complex and undeniable beauty, defying existing narratives about Indigenous people,” Tome observed. “It is a reminder that we are alive, in our fullest purpose, breathing life into the ways that we can be viewed as Native peoples of this land. Historically, Indigenous people in film have been at the whim of our oppressors. Our stories have not been written or created by us, demanding conflict and trauma. Throughout my career, I have questioned why there is a need to frame stories about Indigenous people in detrimental ways for them to be worthy. Long Line of Ladies has changed how I see my role as a Diné woman filmmaker and how we can celebrate our way of life from our own perspective, while valuing the lives of communities healing together to create a better future.”

Long Line of Ladies was shot on 16mm film by DOP Sam Davis, who also edited the documentary. It will premiere on nytimes.com and the New York Times YouTube channel as part of the distinguished Op-Docs series (earlier this year, the New York Times Op-Doc The Queen of Basketball, directed by Ben Proudfoot, won the Academy Award for Best Documentary Short).

Zehtabchi won her Oscar in 2019 for Period. End of Sentence., a short documentary filmed in India about women who band together to manufacture low cost but high-quality sanitary pads.

“Where Period. End of Sentence. aimed to shed light on the stigma and shame surrounding menstruation, the concept for this project was to change the conversation by highlighting a community who celebrates menstruation,” Zehtabchi said in a statement. “But what began as a short film about periods blossomed into a much greater story of community, family, and tradition.”

The film is produced by Garrett Schiff, Zehtabchi and Davis for Junk Drawer in association with The Pad Project, along with Pimm Tripp-Allen and Dana Kurth. It was shot and edited by Davis, with music by Forrest Goodluck and Juan Kleban.

Watch a teaser trailer for Long Line of Ladies here: