“I wanted to render a classic story in a very alive and contemporary way – I wanted people to feel they are watching a story pertinent to our world,” says Nightmare Alley director and co-writer Guillermo del Toro, whose penchant for stylishly crafted horror stories took a turn for the decidedly noir with his latest film.

Del Toro and his writing partner Kim Morgan, an accomplished film journalist and essayist, turned to author William Lindsay Gresham’s fatalistic 1946 novel – now widely regarded as a classic of the hard-boiled, doom-suffused noir genre and the basis for the equally admired 1947 film starring Tyrone Power. Gresham’s tale follows the ascent of rough-hewn carnival roustabout Stanton Carlisle (Bradley Cooper) into a successful, polished café society mentalist, and his descent into downward spiral when he can’t resist turning his audience’s belief in his non-existent spiritual abilities into a high-stakes confidence game.

The opening backdrop of the postwar carnival and the infamous geek shows that served as the era’s most illicit attraction – and which Gresham had diligently studied since childhood – provided a natural segue from del Toro’s horror roots to a story concerned with all-too-human weaknesses, a cautionary fable with an inevitable conclusion.

“The carnival is an incredibly close-knit, hermetic society,” he says. “It’s a place where people keep their secrets, and many are escaping a life of crime or a past they had to leave behind. And yet, they form a strong society. It’s almost like a microcosm of the world. Everybody’s there to swindle everybody. But at the same time, they know they need each other, and they protect one another.”

In broadening the story and characters, del Toro was intrigued by flipping the traditional noir trope of the femme fatale and instead centered on a man who threatens to bring all of the women around him to dark ends. “Thematically, I’m very interested in exploring the genre from a different point of view, he says. “Instead of a femme fatale, I have three very strong female figures and an homme fatale.”

“Stanton is a broken man who has learned to lie to get the reactions he wants from people,” says Del Toro. “He is always trying not to show his real self. He is a mercurial character, who transforms according to circumstances.” As he shifts guises to serve his increasingly outsized ambitions, Stanton poses different destructive challenges for Zeena (Toni Collette), the adulterous carnival fortune teller whose borrowed tricks fuel his rise; Lilith (Cate Blanchett), the high society psychoanalyst he contends with – and eventually colludes with – while duping wealthy marks; and Molly (Rooney Mara), his carny sweetheart and assistant who sense the impending sense of doom that surrounds them both.

“We went after every detail – I wanted Molly to be symbolized by a deer, so she wears a little deer pendant throughout,” says del Toro. “We then have a deer in the room of the hotel, on the headboard of the bed. We referenced everything back to her.”

“We were interested in highlighting this idea that people – then and now – have used spirituality to prey on innocent people,” says del Toro. “When an audience is invested in the story of a person’s rise, their greatest fear is the fall and that fall can be very emotionally strong.”

Click below to read the script for the film from Searchlight Pictures, which released it in theaters December 17. 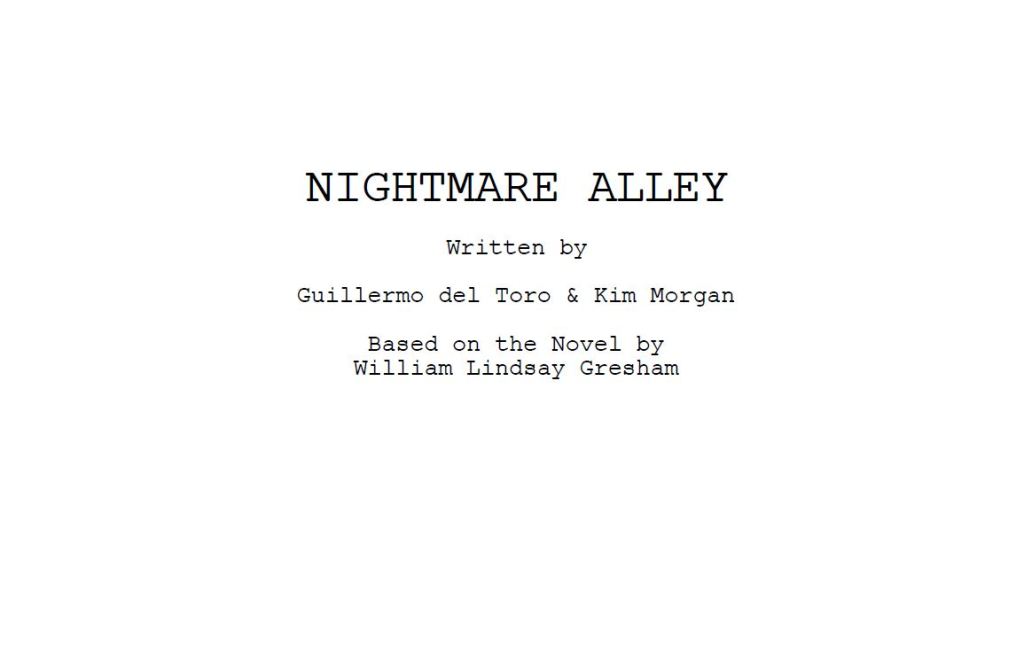