County Public Health Director Barbara Ferrer said today that the number of new Covid-related deaths has doubled in the past week. She also reported that 90% of the new deaths tallied today involved people who fell ill from Covid after December 24, “indicating the high likelihood of infection with the Omicron variant” which became nearly omnipresent among those infected in L.A. at the end of last year.

Deaths, which had been hovering mostly below 30 jumped up to 45 on January 13 and have risen 126% in the week since. 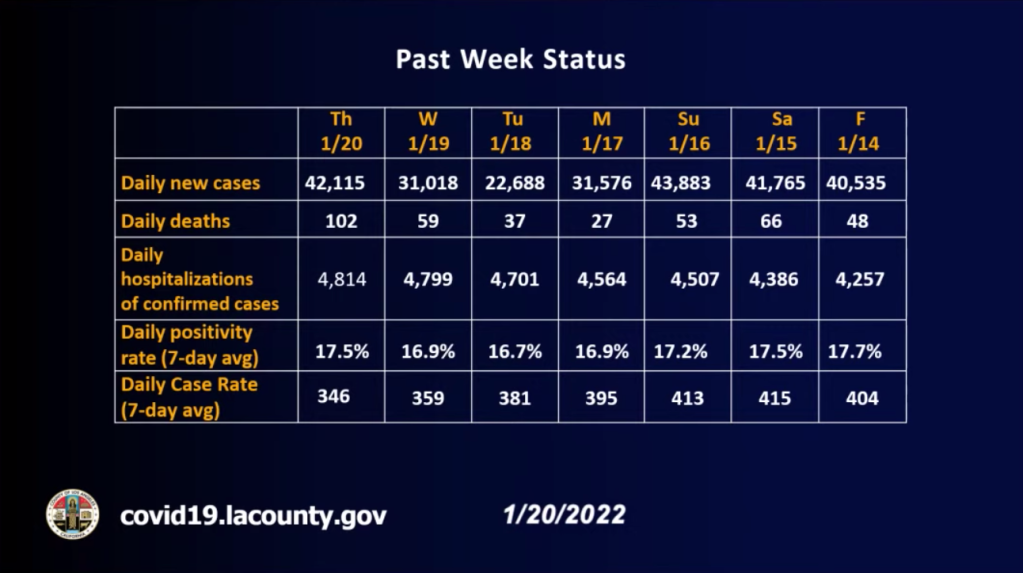 “It looks to us that folks may be progressing faster — folks who have Omicron — so we’re seeing a much shorter timeframe [from infection to death],” said Ferrer. “It looks like they get hit pretty hard earlier on.”

With the Delta variant, she observed, it was generally 5 weeks before infected people passed away. With Omicron that looks to be 2-4 weeks.

According to the Associated Press, Omicron seems replicate much more efficiently than competing variants.” That would likely mean higher virus loads and greater transmissibility, possibly earlier.

“A lot of people are turning positive by day three,” said Dr. Amy Karger of the University of Minnesota Medical School in reference to omicron. “There’s basically an opportunity here to catch people earlier than you would with the other variants.” It also means the cycle of the virus from infection to resolution may be sped up with the new variant.

While Omicron seems to be less virulent than Delta, its speedy rate of transmission and the resulting massive number of cases are overwhelming hospitals nonetheless.

“Hospitals are pretty close to reaching the total census that they reached during last year’s surge,” said Ferrer, pegging that total at about 16,000 patients. Ferrer said the increased number of Covid patients is causing strain at hospitals, even though roughly half of them were admitted for reasons other than the virus and only discovered they were infected when they were admitted. Whatever the case, the number of patients hospitalized in the county is near an all-time high, with roughly between 20 and 25% of them Covid-positive. And an ensemble forecast from the State of California predicts the strain will get much worse before it gets better.

The state’s CalCAT model predicts that daily Covid-related hospitalizations in L.A. will rise from the current 4,814 to a peak of more than 7,800 by February 2.

Current and projected staff shortages prompted the state to announce today it had recently launched an “emergency department support program.”

A kind of surge in triage, the program “provides space and medical staff to help offload and treat patients brought to an emergency room via ambulance.” According to a statement from state health officials, the program is meant to speed up “patient offload times” and provide “patient care allowing ambulances to quickly return to emergency response work.” The state says there are now 15 of these programs established across the state.

What’s more, reads the release, “the state is supporting 188 facilities statewide with 3,048 medical staff. To support the hospital system and the needs of patients the state has increased the number of staffed hospital beds by 1,343.”

Ferrer said there are signs the surge in cases, at least, may be easing: “While case numbers and test positivity are extraordinarily high, there are small decreases from last week” on which Deadline reported this week. “The average daily new case rate is now at about 33,000 cases a day. Test positivity decreased slightly this past week to approximately 17%, meaning that nearly one in six people getting tested is infected with Covid. The seven-day average daily case rate also dropped a bit to about 350 new cases per 100,000 residents.”

And if there’s a quicker progression from detection to resolution of cases with Omicron, that could mean the numbers fall equally quickly.

“It took weeks for cases to decline for cases to go down, previously,” observed Ferrer. “If [the progression is] quicker, we might see a quicker decline.”