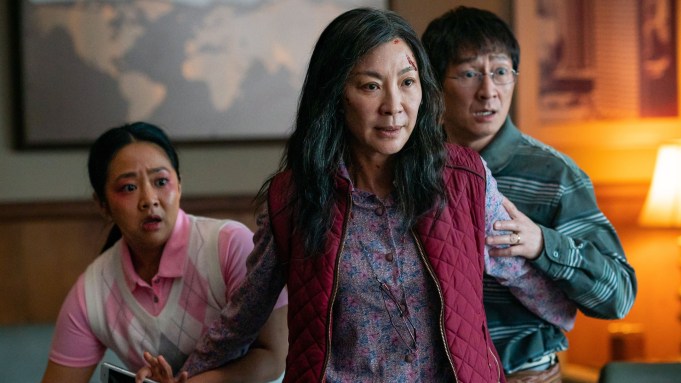 ‘Everything Everywhere All at Once’
A24

A commenter named Brad replied to an Oscar predictions piece I put up over the weekend and said: “There used to be a time when I anticipated the Oscar Nominations. But I feel that time has not been good to the Academy Awards and with so many awards ceremonies these days, the Oscars do not seem special like they once did.”

He has a point, as did Cate Blanchett when, during her Critics Choice Award acceptance speech, she wished for the “televised awards horserace” to end and everyone be declared a winner. There is so much noise, so many precursor groups handing out awards that the Oscar nominations look more often like a rubber stamp these days, even if it clearly remains the only film award truly coveted. At 95 years old, it still will be the first line in any winner or nominee’s obit.

Colin Farrell and Brendan Gleeson in ‘The Banshees of Inisherin’

But looking at today’s list of nominees, particularly Best Picture, can we say that any of them are actually surprising? Stunners? Shockers? Are any of them not the names we have heard pundits (and yes, I admit to being one of them), critics groups, awards consultants, studio trade ads and so on pounding into our heads since the season began in earnest at the end of summer? One Oscar season reporter for a major trade makes a living out of “Breaking News” posts on every single possibility in every single way of who could possibly be nominated, even though 90% of them never will, but hey, it probably encourages more ad buys. Our colleagues at Gold Derby have a whole website devoted to dissecting every combination of possibilities. The Los Angeles Times, like many big-city newspapers, has a special section devoted to breathless coverage of the lead up to nominations and the ceremony itself.

It is not your father’s Oscar race anymore, Brad.

So can there really be any surprises anymore? Well, a couple.

Felix Kammerer in ‘All Quiet on the Western Front’ (Netflix)

Some might be surprised to see Netflix’s German-language film, All Quiet on the Western Front up for nine Oscars including Best Picture, maybe even Netflix itself, which was more noticeably pushing Bardo and The Glass Onion: A Knives Out Mystery earlier in the season (the former got a Cinematography nom, the latter only Adapted Screenplay). This film certainly was in the mix but not one the streamer took to the high-profile fall festivals. I would say All Quiet genuinely is the only movie of the 10 nominees that firmly was the idea of Academy members themselves, just as it was the idea of BAFTA voters, who showered it with 14 nominations last week. The industry took notice simply because in seeing the movie, they knew it had the stuff. It was abundantly clear in conversations with every Oscar voter I talked to in recent weeks who had seen it that this was more than a mere International Film front-runner. That was all confirmed when the shortlists came out last month and it was the co-leader. The only surprise to me was that the Directors branch overlooked its Edward Berger (who did get an Adapted Screenplay nom, as well as being director of an International Film nominee, though that attribution goes to the country).

True to form, though, the more international-friendly Directors branch did go for a foreigner, but it was Ruben Östlund for the Cannes Palme d’Or winner Triangle Of Sadness, which also nailed Picture and Original Screenplay nominations for the Swedish Östlund’s English-language debut from Neon. Although France missed out with its International Film entry, Saint Omer, this is another feather in the cap for Cannes, after Bong Joon Ho’s South Korea phenomenon, Parasite, went all the way from Palme d’Or to sweeping the Oscars in 2020. Again, this success is simply due to voters actually seeing the movie, and that Cannes prize made it a must-see this season. I am only sorry the brilliant Dolly De Leon missed out on a Supporting Actress nomination for her towering performance in it.

Critics can take credit for putting Everything Everywhere All at Once into front-runner status with its leading 11 nominations driven by the Actors, Directors, Writers and Music branches. It was relatively weak in the crafts areas, though, with only Costume and Editing mentions, so missing in areas like Visual Effects, Cinematography, Production Design, Sound, Hair and Make Up could be telling in its overall Academy appeal. It is a juggernaut to be sure, and actually a landmark movie for Oscars as it came out in March and premiered at SXSW, not usually the release pattern for a major Oscar contender. It helped that it was a box office phenomenon for A24, which was the indie darling of the morning, also nailing three nominations for The Whale, a Best Actor nom for Paul Mescal in another critical darling Aftersun, and an animated nom for Marcel the Shell with Shoes On, the latter two films also championed heavily on the critics awards circuit.

No one was surprised at the considerable love for movies from studio specialty divisions Focus Features with Tár, and Searchlight with The Banshees of Inisherin or with Best Picture attention for Steven Spielberg’s The Fabelmans (seven noms) and MGM/UA’s Women Talking, which all were prominent on the fall festival circuit, with the latter two coming in No. 1 and 2, respectively, for Toronto’s often-prescient People’s Choice Award.

The outstanding showing for big studio blockbusters, though, must be heartening for Oscar show producers who desperately need marketing hooks to boost the ratings, but was anyone surprised at this point that Warner’s Elvis (eight noms), Paramount’s Top Gun: Maverick (six) and Disney/20th Century’s Avatar: The Way Of Water (four) made the cut for Best Picture? All were widely predicted, even though the directors for all three missed out, including another snub for James Cameron following last week’s DGA list. Someone tell the Directors branch that global box office megahits don’t just direct themselves. It is another reason the Academy should consider expanding the number of directors nominated to 10 in order to match, or at least give a fair shot to, the directors of their 10 Best Picture nominees.

It is also notable that three of the Best Picture nominees — Top Gun: Maverick, Elvis, Everything Everywhere All at Once, responsible for 25 nominations among them — all opened in the first half of the year, and a fourth, Triangle of Sadness was seen in Cannes in May. Common wisdom is you don’t unveil your serious Oscar contenders until Labor Day, when you also stop wearing white.

For most people the true surprise of the morning was the Best Actress nomination for British thesp Andrea Riseborough in the Lead Actress race for the virtually unseen To Leslie. This was a micro little indie movie that premiered at SXSW (big year for that March fest, which never figures much in the Oscar conversation!) and then disappeared until its nominal theatrical “release” by Momentum Pictures, where it chalked up a reported worldwide gross of $27,000 and change. As I wrote a couple of weeks ago in my Notes on the Season column, I was contacted by a producer friend, Steve Jaffe, unaffiliated with the film, who along with his wife Susan Blakely was so impressed after seeing it at a small screening for Academy members that they joined an activist campaign to get her performance attention. He wanted recommendations of who they could hire/get to write about the film, and it was the first time it even entered my consciousness.

A friend, Frances Fisher coincidentally followed with a text: “I just saw TO LESLIE. Omg! Andrea Riseborough just went to the top of my list for Best Actress!!!” I had been sent a link by Riseborough’s PR firm and watched it immediately, sensing something was going on. It is a stunning performance, but such an uphill climb, especially at this very late point in the race, to get it noticed. After I wrote about this guerrilla Oscar campaign, I understand that column was passed around to some Actors branch members just as voting was beginning as an example of press attention for their sincere efforts to gain attention for a fellow actor. This was as pure a “campaign” as I have seen in decades, one with virtually no money except to get the film on the Academy’s Digital Screening Room viewing platform (generally it cost $20,000, which is almost the entire gross of the movie), so it is nice to know in this case the Academy’s Actors branch (who are the ones doing the nominating) proved you can make a difference without a studio or distributor pouring millions into influencing voters. It is probably the exception and not the rule, but it could inspire others in the future, no doubt.

In terms of snubs, if we must call them that, I was very sad to see both The Woman King and Till completely shut out despite very active campaigns, especially for their respective stars, Viola Davis and Danielle Deadwyler. Maybe either SAG nominees Deadwyler, astounding as Mamie Till-Mobley, and Davis with the blood, sweat and tears of her performance in Woman King perhaps were knocked out by Riseborough’s late-inning rise in an uber-competitive Lead Actress race. What a shame for them, though. Oscar can work in mysterious ways.

I have to say I was personally very happy to see Jamie Lee Curtis, one of my favorites, gain her very first Oscar nomination as Supporting Actress for her off-the-wall performance in Everything Everywhere All at Once. Interesting to note: She follows her late father and mother into Oscar history as now all three have a nomination credited to them. Tony Curtis was up for Best Actor in 1958’s The Defiant Ones, and Janet Leigh was up for Supporting Actress in 1960’s Psycho. It is a very short list of other families who have done this, with parents and child earning acting nominations: the Fondas with Henry, Jane and Peter; Bruce Dern, Diane Ladd, and Laura Dern; and the Hustons with Walter, John and Anjelica. Congrats to Jamie Lee!

On the bright side finally two actors never nominated in their much celebrated lifetimes, Elvis Presley and Marilyn Monroe, are at last going to the Oscars. Who would have guessed? Perhaps the most famous dead stars of all time, bigger even in death than life, and eternally immortal thanks to film, are represented by Austin Butler, nominated for Lead Actor in Elvis, and Ana de Armas, for Lead Actress in Blonde, all in the same year.

Overall, surprises or not, it is a very good list despite the disappointments. Blanchett, Ke Huy Quan and Angela Bassett will be heavily favored in their individual acting races, at least until the all-telling SAG weighs in on February 26, while Best Actor will be a nail-biter. Everything Everywhere rides in on a wave of momentum and is probably a Best Picture front-runner because of that, but the Best Picture race, because of the weighted balloting system the Academy employs, is a lot more unpredictable than you might think. I can see two or three scenarios of the way it might go, and one of them involves Top Gun: Maverick.

Maybe, Brad, the Oscar race isn’t as predictable as you might think.

To be continued. The Oscars will be presented March 12 live on ABC.