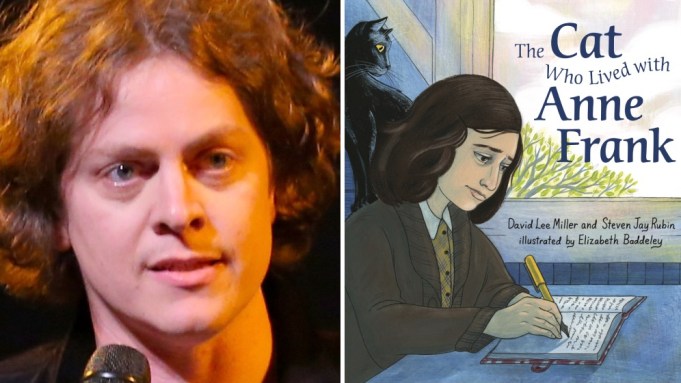 Billed as The Lion King meets Inglorious Basterds, Mouschi is a work of fantastical, historical fiction, reimagining the cat who lived with Anne Frank as an Amsterdam swashbuckler who becomes a freedom fighting hero of the Dutch Animal Resistance. (Snuck into the famed Secret Annex by teenager Peter Van Pels, a cat named Mouschi really did live in hiding with Anne Frank. Anne wrote about Mouschi frequently in her red-checkered diary, which she named Kitty.)

The Penguin imprint Philomel published the book with illustrations by Elizabeth Baddeley in 2019. Miller and Rubin penned the screenplay for the upcoming film adaptation, with the former also to serve as co-director. Multiple Independent Spirit Award nominee Patrick Cunningham (Spell, Martha Marcy May Marlene) is producing, with Rubin and Christa Lang Fuller serving as executive producers. Pic is being made with consultation and guidance from the Jewish human rights organization, Simon Wiesenthal Center, which also hosted the book’s launch at their Museum of Tolerance on International Holocaust Remembrance Day. Portions of the movie’s profits will support the SWC.

“This is an exciting action/adventure story chock-full of entertainment value that will intrigue audiences from 8 to 80. It’s also a very timely film,” said producer Patrick Cunningham. “Stories like this unite everyone. With the rise of anti-Semitism around the world, it’s time to remind audiences that the Nazis are the bad guys, based on actual history, not white supremacist fantasy.”

Oldenburg is a director, illustrator, designer and immersive storyteller who in 2012 won an Oscar for the animated short The Fantastic Flying Books of Mr. Morris Lessmore, sharing the prize with writer and co-director William Joyce. The multi-hyphenate has also won multiple Daytime Emmys and Cannes Golden Lions, among other accolades. As Chief Creative Officer of Flight School Studio, he leads a team of creative directors and artists producing innovative stories with new technologies. Prior to Flight School, Brandon co-founded Reel FX and Moonbot Studios, both leaders in animation and emerging technology.

Miller previously wrote, directed and produced My Suicide, a teen dramedy that won the Crystal Bear for Best Feature at the Berlin Film Festival, among many other accolades. He is currently writing a feature about child sex trafficking for producer Sean Wheeler.

Rubin exec produced My Suicide and also produced Silent Night, a WWII drama for Hallmark Channel that was nominated by the Academy of Canadian Cinema & Television for four Gemini Awards.