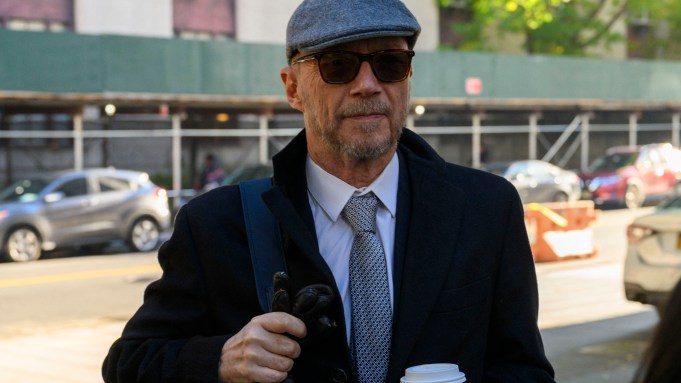 A former high-ranking official in the Church of Scientology said Friday that the organization never forgets its enemies “until they are destroyed,” and he said that filmmaker Paul Haggis, who quit Scientology, remains one of its biggest targets.

Mike Rinder, an Australian who was Scientology’s top enforcer and who co-hosted the Emmy-winning docuseries Leah Remini: Scientology and the Aftermath, was was the first witness for the defense in the New York sexual civil assault trial of Haggis.

The Oscar-winning screenwriter of Crash and a major figure in a 2015 documentary exposé about Scientology, Going Clear, Haggis is being sued by Haleigh Breest, a publicist in New York who claims that he raped her in his Soho apartment in 2013. Haggis says the sex was consensual and, on the trial’s eighth day, his defense began with a sometimes chaotic turn in the witness box for a fellow ex-Scientologist, Rinder, who said the two men are friends.

Rinder told jurors that he “escaped” Scientology in 2007 after more than 40 years in its ranks, and chunks of his testimony were shot down as hearsay because, as the judge, Sabrina Kraus, noted, “The witness has testified he was no longer affiliated with the church” after 2007.

But over numerous objections from a lawyer for Breest, Rinder was allowed to implicitly connect Haggis’ exit from Scientology to the multiple sexual assault allegations against Haggis being aired in this trial. Four women from Canada who worked in film and television have testified alongside Breest that they, too, were assaulted by Haggis in separate incidents between 1996 and 2015.

Rinder said that when he ran the organization’s so-called Office of Special Affairs, its role was to silence critics and opponents — or “suppressive persons,” in Scientology jargon — through blackmail and reputational or financial sabotage while leaving none of the organization’s fingerprints on these operations. “The covert intelligence operations, Scientology will never admit to,” Rinder said, indicating those operations continue today.

Haggis himself said in a 2011 New Yorker article that inspired the documentary, “These people have long memories. My bet is that within two years you’re going to read something about me in a scandal that looks like it has nothing to do with the church.” That excerpt was read aloud in court Friday despite an objection from Breest’s lawyers that saw both legal teams exit the courtroom with Judge Kraus for a bench conference.

Rinder said his evidence that Breest’s lawsuit might be connected to Scientology is a documentary mentioning the case that was in the works for an Australian television outlet.

“And Scientology got that show spiked,” Rinder told a lawyer for Haggis, Seth Zuckerman.

A Breest lawyer, Ilann Maazel, pressed Rinder to admit he has no real evidence of his former organization deploying an operation against Haggis. But the exchange was repeatedly cut short by objections from Zuckerman.

“You have absolutely no idea what Mr. Haggis did to those five women,” Maazel said, his voice rising. Noting that the two are friends, Maazel said, “Have you ever asked him what happened that night?” meaning the night Breest was in Haggis’ apartment. Rinder said he hadn’t.

Rinder also denied, and then admitted, that he had written an e-mail to the Haggis camp saying, “I hope his lawyers and PIs pull the strings on any of the women’s reasons for speaking out.”

On friendly redirect, Rinder said if there were an operation against a “suppressive” like Haggis, Scientology is so good at covering its tracks by using layers of “cut outs” that “nobody would have any knowledge of that” — essentially arguing that a lack of visible evidence for such an operation was proof it could be happening.

A day that opened with both parties agreeing Breest is not a Scientologist ended with hints of a hidden Scientology conspiracy.

“I think we’re done for this week,” Judge Kraus told jurors with a nervous laugh.

Before then, Zuckerman ended his cross-examination of Breest’s expert psychologist, Lisa Rocchio, by asking if Rocchio’s fees might be paid by “a third party” — prompting a lawyer for Breest, Zoe Salzman, to shake her head.

Breest’s lawyers have criticized the Haggis team for suggesting Scientology has any role in the litigation. Outside the courtroom, Salzman and Maazel both said neither they nor their firm has any connection to Scientology and has never received a dime from the organization.

“The whole Scientology defense is embarrassing,” Maazel said. “It’s absurd.” He said the defense’s only reason for introducing it is to “distract” from his client’s case.

The trial resumes Monday and Haggis himself could testify as early as Tuesday or Wednesday.