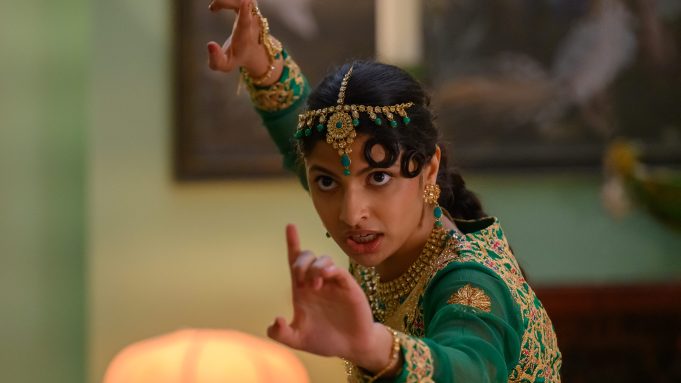 The movie begins with Ria (Kansara), a Pakistani teenager in a karate class. She’s a purple belt who is serious about honing her skills to become a stunt woman. She records YouTube videos of her home training and recites the line “I am the fury.” Her older sister Lena (Ayra) is an art school dropout who mopes around her parents’ house and often helps Ria record her videos. Ria is obsessed with professional stunt woman Eunice Huthart, who she frequently emails but never receives a response.

Ria and her two friends Clara (Seraphina Beh) and Alba (Ella Bruccoleri) attend a private all-girls school where they are constantly picked on by a girl name Kovacs (Shona Babayemi). The bullying reaches fever pitch until both Ria and Kovacs begin wire-fu fighting on school property. Ria’s parents Fatima (Shobu Kapoor) and Rafe (Jeff Mirza) are working folks who expect their daughters to become doctors, lawyers or anything but an artist or stunt woman. After the family attends an Eid Mubarak celebration at the home of Raheela (Bucha), a wealthy member of the Pakistani community, Ria rich discovers her sister is in the running to wed Raheela’s rich, geneticist son Salim (Akshay Khanna). The teenager senses something more sinister is at play, but with no evidence, what can she do? Anything in her power to make sure this marriage doesn’t happen.

Polite Society is a fun story about what happens when families are split between tradition and modernism, and how to find the balance between the two. Yes, arranged marriages are still a thing in that culture, but Ria finds it strange that Lena falls in love with Salim after only several weeks of knowing each other. However, it’s difficult to gauge what is real and what is imagined from Ria as she is the most unreliable narrator. Even though she’s right to speculate, her mind wildly exaggerates scenarios. Thing only thing that makes her claims mildly plausible is that deep down Lena senses something is wrong as well.

Polite Society‘s fantastical elements are told in a disorganized fashion just to put forth the message about caste systems, religion and reincarnation. This style works for the most part and it’s easy to appreciate a story that doesn’t take the straightforward route but finds creative ways to make a statement about familiar themes. The fact that Ria is capricious adds to the mystery of it all. The narrative isn’t always cohesive because by the end it feels like I watched two different movies; the major reveal should have come a bit sooner in the story because by the time the story reaches the reveal, it’s anti-climatic.

Overall, this is a fun film that explore cultural norms, and when they aren’t adhered to, it can be seen as an impolite gesture not to conform. But it isn’t a condemnation of these rules so much as a critique on them, and why some people choose not to accept these particular sets of rules. It’s always cool learning new things in inventive ways without having to pile trauma on top of it. The cast is having a good time, especially Bucha who is fantastic as the story villain.

Polite Society isn’t perfect, but worth taking a chance for some good laughs and a good time.