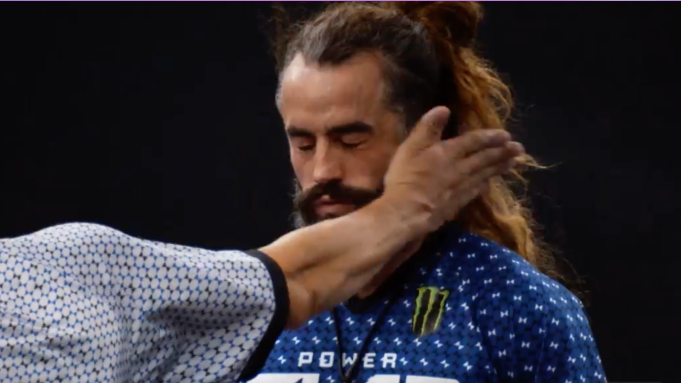 The new TBS show Power Slap: Road to the Title is generating controversy on social media because its sole premise is to watch men and women slap each other – sometimes to the point of unconsciousness.

A video tweet by Dr. Chris Nowinski, a neuroscientist and founder of the Concussion Legacy Foundation, has garnered more than 15 million views after showing a particularly disturbing moment from show, hosted and created by UFC president Dana White. In the first few minutes of the program that debuted Wednesday, a contestant named Chris Kennedy is literally knocked to the ground after the first slap by opponent Chris Thomas. It takes a few beats before Kennedy, who shows the tell tale signs of a concussion by clenching his arms and fists, regains consciousness after hearing a doctor tell him what happened.

“Got knocked out doing what, was I fighting?” replies Kennedy.

“This is so sad,” Nowinski tweets. “Note the fencing posture with the first brain injury. He may never be the same. @danawhite & @TBSNetwork should be ashamed. Pure exploitation. What’s next, “who can survive a stabbing”?”

This is so sad. Note the fencing posture with the first brain injury. He may never be the same. @danawhite & @TBSNetwork should be ashamed. Pure exploitation. What's next, "Who can survive a stabbing"? pic.twitter.com/jTENpUmJDd

The premiere of the show was actually delayed a week after White was caught on camera slapping his wife over the holidays. Power Slap is a new sports league created by White, Lorenzo Fertitta and Craig Piligian, the Pilgrim Media founder who runs Lionsgate’s unscripted division. It is focused on competitive open-handed striking.

So far, its barely registering a blip on TBS: despite a decent lead-in from AEW Wrestling, the 10 p.m. ET show reportedly averaged 295,000 viewers and a .10 rating in the 18-49 demo. Sadly, the attention it’s getting by Nowinski could improve things in week 2.

The show begins with warning (along with that old TV chestnut viewer discretion is advised): “The following program features activities that are dangerous and/or may expose participants to the risk of serious injury. Do not attempt to re-create or reenact these activities.”

From there, the premise of Power Slap: Road to the Title is painfully simple: an “athlete” is given 30 seconds to slap an opponent hard enough that he will either fall to the ground and stay there or judges deem him too weak to move on with the comp. There are three rounds of slapping and there are four classes of competition– welterweight, middleweight, light heavyweight and heavyweight. Women participate, as well.

In the first episode, White explains how he launched the new league: he saw men in Poland and Russia slap each other and was “into it immediately.” He then got sanctioned by the Nevada State Athletic Commission to “turn this thing into a real sport.”

Contestants threaten things like “I’m looking to take your head off” while White says “you have to be physically, emotionally and mentally tough to get through this experience.” He also goes on to call it the “opportunity of a lifetime.”

The first episode is streaming on the TBS website.