ABC’s Queens revealed Brianna’s (Eve) fate in Tuesday night’s episode titled “Bars,” but fans had to wait up until the very last moment to see that she not only survived but she is thriving. 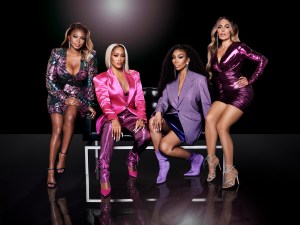 QUEENS – Naturi Naughton as Jill aka Da Thrill, Eve as Brianna aka Professor Sex, Brandy as Naomi aka Xplicit Lyrics, and Nadine Velazquez as Valeria aka Butter Pecan.
ABC/Gavin Bond

To recap the events that led to Brianna’s life hanging in the balance, Jill’s (Naturi Naughton) ex-husband Darren (Emerson Brooks)) shot Brianna and Eric (Taylor Selé) leaving them for dead. Both beat the odds and while Eric attempted to re-enter the world a better man and father, Brianna used the near-death experience as a sign to make an exit.

With the help of her friends Jill, Eric, Naomi (Brandy Norwood), Valeria (Nadie Velazquez), and Lil Muffin (Pepi Sonuga), Brianna faked her death. In the final moments of episode 109, Brianna is shown in paradise. She is lounging on the beach of Piedras Blancas—where she and her late husband Jeff honeymooned—alongside their children.

Eve To Take Break From ABC's 'Queens' After Pregnancy Announcement

Deadline revealed exclusively that Eve would be going on maternity leave from Queens in November as she prepared to welcome her first child with her husband Maximillion Cooper in February. It is as yet unknown if Eve will return to the series, but series creator Zahir McGhee remains hopeful.

McGhee spoke to Deadline about Brianna’s fate and what it means for the rest of the season for the Queens.

DEADLINE: You really kept viewers worried up until the very end! Why did Brianna go to Piedras Blancas?

ZAHIR MCGEE: It was set up in episode 7 when Jeff left that video for her. He talked about their honeymoon in Piedra Blancas and reminded her of their promise to take their kids there one day. She was keeping that promise. She had surgery, got better, and basically said, ‘F this. I don’t need it. I’m gonna do what Jeff and I said we were going to do.’ It’s kind of an homage to her marriage and a final bit of healing after all that she’s gone through. At the end of the episode after they form Nasty Girl Records—which is a very exciting thing for us and them—when Naomi says, ‘There’s one more person we can call.’ They know where she is and they’ve been in contact with her.

Is there a plan in place for Eve to return?

When Eve told me she was pregnant, we were extremely happy for her. I had just had a baby myself. I didn’t know what she planned for the show, but instinctively I asked if she wanted Brianna to be pregnant. That’s when she told me she didn’t and that she had a date set to leave. The cast and crew wanted to give her the space to enjoy this incredible time. We will continue to build the story as people will see in episode 9 and she will remain present in the minds of our characters. Since the beginning, she’s been Queens’ third partner and she’s in this for as long as she wants to be in it.

Was that the final scene she shot or do you have more you can use later this season?

There are things that we left on the floor… If you think about our show, we exist in many timelines. In the mid-season finale, we opened up the third timeline in 1993 when they first met. We were saying about episode 9, that it wouldn’t matter if Brianna had died. We have a show where she could still appear in 100 episodes regardless because of the timelines. So, there is a chance that you could see Eve before the end of the season. What I can say for sure is that you will feel her presence, and we have something special in store for the audience in the finale. 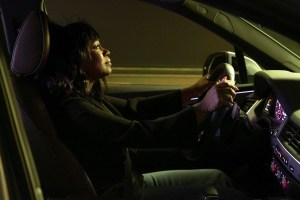 Jill is carrying a huge burden, is showing signs of PTSD, and was seeking out drugs to cope. What’s up next for her?

Jill’s been going through a lot on a personal scale which has forced her to look into a mirror in a way that the others have not. Similar to the pilot, they’re all going in separate directions and trying to figure themselves out and what their next steps are. So we’re going to have these separate stories for them then bring them back together.

I think the show is best when it’s operatic high drama and fun, like when there’s music and laughter and fun. We will deal with Jill’s inner problems that cause her to go to that place, but I don’t think we’re going to dig too deeply into the drugs after this episode.

Have we seen the last of Darren?

He might be gone from our show, but that situation isn’t gone. Up to this point, we saw him knocked out on the ground before getting arrested. There’s going to be a trial but I’m not saying we’re going to live in his trial. But, that story and how it impacted her, is not over. So we may not focus on PTSD and the drugs, but the feelings and guilt are not necessarily gone.

We also have an amazing guest star coming in for her in episode 10 playing her deacon dad. He will give us some backstory to help us understand why Jill is the way she is. 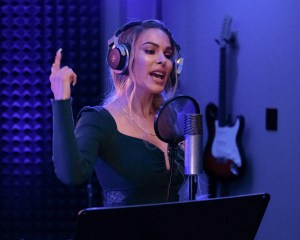 Valeria is going through so much so fast and then she runs off and gets married to Thomas (Gaius Charles). Does this man have good intentions?

We wanted to see someone who never wanted to get married rush into it and deal with whether that was right or wrong. It’s going to be fun and very “oh my God” to watch her get married and deal with the aftermath in terms of what she wants for her future. We’re also going to see her solo music pop and find her identity as a solo artist. There will be some guest stars that push her to be a little bit more authentically Puerto Rican in her music. As she finds that, she’s going to also be figuring out how to be married and how to fall in love with a stranger. By episode 12, [Valeria and Thomas] are going to deal with a real dilemma about their future and it very quickly morphs into a real relationship.

Naomi and Remy Ma’s Lady Z represent what could’ve been for Tupac and Biggie had they survived. Is Z coming in as that honorary fourth while Eve is out? 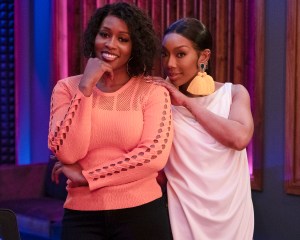 What I love about where we’re going with Queens— as we’re taking a brief pause with the Queens as we know them—they’re trying to figure out what they can do together next. We watched over the course of 8 episodes up until the point of tragedy, how these women get back together, mend old wounds, deal with their complicated personal lives, and then become the queens of rap once again. That was really triumphant to watch. Now to watch them move into this next venture is by asking how they can do this for more queens.

Lady Z isn’t the last one. I’ll say that. This is going to be a thing and it’s not always going to be in the hip hop genre. They want to help women who have been marginalized because of their age or many other reasons, the way they helped themselves.

Coming up in episode 10, we explore how male-dominated the music industry really is. There are so many stories out there about how young women are treated like products by older men. So we’re tackling Lady Z’s story about how she was driven out of the industry and sexual assault in the music business in a very powerful way.

Regarding whether or not Lady Z could fill that void left behind by Brianna in some way, we’re open to anything. We’re going to have some guest stars come through in the iteration of what this record label looks like. Remy Ma as Lady Z certainly fits the mold of that sort of forgotten queen who is incredibly talented who, through circumstances beyond her control, was pushed aside. With the support of the ladies, Lady Z could definitely become part of the group. It’s hard for Naomi, Jill, and Valeria to imagine the group without Brianna in it, but anything is possible.