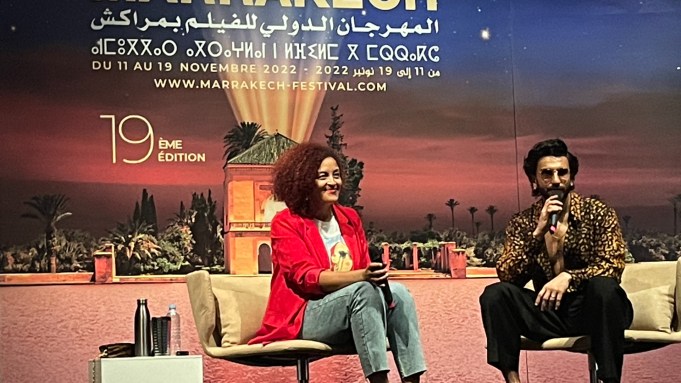 Ranveer Singh took to the stage at the Marrakech International Film Festival on Saturday to discuss his 12-year trajectory from an unknown Mumbai outsider to one of Bollywood’s most famous and best-paid actors.

Speaking in an In Conversation event, the actor revealed he was so green about the mechanics of shooting a feature film when he first arrived on the set of his 2010 breakthrough romantic comedy Band Baaja Baaraat he had never seen a boom mike before.

“My co-actor, the beautiful Anushka Sharma had done one feature and she held my hand through that entire process. I was so basic that in a talking scene on the first day, there was a person standing there holding the boom mike, and I’m looking at Anushka, saying “Is this guy going to stand there like that the whole time?’,” he recalled.

Paolo Sorrentino Sounds Alarm For Cinema, Says He Has A Duty To Make A Movie For Theatrical Release – Marrakech

“When I see this movie now, I don’t know how I pulled it off with that lack of experience… It’s like you know, when Eminem says, ‘You’ve got one shot’,” continued Singh, then breaking into a rendition of the U.S. rapper’s 2002 track Losing Yourself. “It was sink or swim, do or die.”

Singh recounted how he spent three-and-a-half years trying to break into cinema in Mumbai, having decided to pursue his childhood dream of acting after a student production while at university studying copywriting reignited his love of being in front of and delighting an audience.

“I didn’t have a road map. It was like groping in the dark, flapping my hands and legs and trying to catch hold of something,” he said. “I joined theatre groups. I became an assistant director. I was doing different things within the Bombay film industry to find some kind of lead. I spent a lot of time staring at the ceiling wondering, ‘Is it ever going to happen for me?’”

During that time, Singh, who was then in his mid-20s, also came into contact with an unsavoury side of the Mumbai film industry. He recounted how one now late prominent producer had unleashed his dog on him at a private soiree for fun, having invited him there for a meeting, and how he also had brushes with the casting couch.

“This guy calls me to this seedy place and is like, ‘Are you a hard worker, or a smart worker?’. I didn’t consider myself to be smart, so I said:  ‘I think I’m a hard worker.’ He was like, ‘Darling, be smart, be sexy’. I had all those kinds of experiences during those three-and-a-half years, and I think it was that period that makes me value the opportunities I have now.”

Beyond Band Baaja Baaraat, Singh said a life and career-changing moment for him had been working with Sanjay Leela Bhansali on the Romeo And Juliet-inspired contemporary romance RamLeela, on which he met his now wife, Deepika Padukone, and Bajirao Mastani.

Singh also revealed the extreme measures he had taken to get into character early on in his career before he developed his acting skills.

Talking about his third feature, the romantic drama Lootera, in which he plays an archaeologist who gets shot in the leg, he explained how he had physically replicated the pain to get the right look for the shot.

“I was so raw at the time. I lacked the tools that were required to create that effect. I was thinking to myself I’ve never really experienced that level of pain before so let me try to recreate it,” he said.

“I used to take these very industrial grade clips and clip them to my hip in the morning, do hair and make-up, and then travel to set. It would collect all of this blood and be very tender… When they said, roll camera, I would hit it and pain would go from the tip of my toe to my hip. I was actually recreating that degree of physical pain because I did not know how to do it.”

Singh said he no longer resorted to these sorts of physically, painful techniques but revealed he had gone to extreme lengths to create the character of the evil Sultan Alauddin Khilji in the 2018 historical drama Padmaavat.

One of the most expensive Hindi productions ever, the film sparked controversy at the time of its release for its portrait of Khilji, a real-life 14th-Century ruler, and its alleged depiction of good and evil along Hindi versus Muslim lines.

“This was a bit harmful, this character,” said Singh. “Trying to create Khijil, I couldn’t wrap my head around a person who allegedly committed genocide. The kind of things I read about this guy and what he did is unimaginable. I was asking myself how can I play this with conviction. They say he killed 30,000 soldiers and made a giant pillar of all their skulls to deter invaders from coming down that path again.”

Singh rented himself a small flat in the suburbs, which he referred to as “a cave”, where he read about tyrants and subjected himself to darkly themed music and film.

“I locked myself in the apartment for the longest amount of time. I was watching Lars Von Trier films, listening to Krzysztof Penderecki’s soundtrack from The Shining. I was only engaging with these very dark and disturbing themes,” he said.

“I watched Nymphomaniac 1 & 2 back-to-back. I’d shut the lights and I’d play The Shining soundtrack and try to feel the music, I was doing all sorts of crazy things to get in touch with whatever darkness might be residing in me – I believe everyone had a bit of darkness in them. Do that from morning to night, around the clock for long enough and you become an animal.”

Singh also put himself on a meat-heavy diet: “It was a tough period. I changed my diet, to start with the gut. I ate meat morning, at lunchtime and night. I was sweating mutton. It made me a very aggressive person. I don’t think I was a very pleasant person to be around.”

Asked whether there were any types of roles he had not tackled as yet and would be keen to play, Singh said fans had written to him saying they would like to see him in a “slick actioner, spy kind of movie,” in the vein of the James Bond and Jason Bourne franchises.

Responding to the moderator’s suggestion that he would make a good James Bond, he replied: “Shall I audition here? …You know what everybody put that energy out into the universe. Let’s see me as James Bond, the first brown James Bond, I love it.”