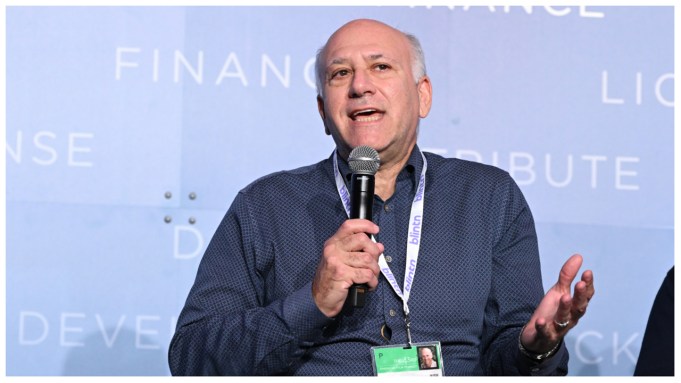 Independent films in the theatrical marketplace are weathering a particularly fierce storm in the post-pandemic world with theatre closures and the struggle to get older audiences back into the cinema but Roadside Attraction’s Howard Cohen says that it will take one indie hit to drive numbers back up.

“It’s a hit-driven business so I think a big success in our space would cause a virtuous cycle in that it would bring people back to the theater for the first time and that would be trailered by other movies,” he said during a panel at the American Film Market, pointing to past indie successes such as Little Miss Sunshine and Slumdog Millionaire. “Movies like that, even a couple of them, could be game changers and bring people back and remind them of these experiences.”

“I think that might be our way out and our way back,” he said. “At least a couple of movies in that space that really overperform and I don’t think it’s going to take a huge amount.”

Cohen was joined by IFC’s Scott Shooman and Millenium Media’s Jeffrey Greenstein during the panel at the Loews in Santa Monica. A big concern for all panelists is how the business gets the older demographic back into the cinema.

“Truthfully the older demographics aren’t comfortable coming to the cinema just yet and the habits of watching content have changed,” said Greenstein. “Throughout the entire pandemic, it was just so easy to stay home and watch and I think that’s a big factor.”

Shooman added that the type of filmgoer who would just “show up at the cinema on a Tuesday and pick a movie” isn’t around anymore in the current climate. He called on cinema’s to make the moviegoing experience “more alluring.”

“That audience is not there anymore and that is what has sustained a huge chunk of the business,” he said. “I think we can sit around and wait and sit there and believe in the audience, which we do – we still support movies for older audiences and we are still buying them but we are also sitting there and saying, ‘what is working?’ Maybe it’s something more genre-adjacent or something that has a little bit of a younger appeal or a younger protagonist or things like that that we just have to be a little more reactive about.”

Recent releases in the indie space such as Tár, Till, The Banshees of Inisherin and Triangle of Sadness are coming off the back of expansions and, says Cohen, who also recently released Call Jane, these are very different movies for the adult-minded audience and “none of them performed to pre-pandemic levels.”

“If these four movies had been released in 2018, I can say they would have performed 50-100% better,” he said. “You can’t totally blame the movies because I do think they all kind of underperformed versus what they would have done.” The exec added that he was “heartened” by the success of Focus Features’ Mrs. Harris Goes To Paris, which took more than $10M at the box office but believed that number would have been higher pre-pandemic.

“I mean part of it is ‘if you build it they will come,’ sure, which means we have to have more movies and keep trying and keep swinging,” said Cohen, adding “it’s just about having enough different product.”

Greenstein added: “We’re in a time where cinemas are going through the hardest period of existence. They’re working on recovery so, naturally, they are going to do whatever they can to make the absolute most money out of it and they are going to kick other movies that aren’t working out in the shortest time. But genuinely what it does come down to is doing what works to the best of our ability and continue putting out good content – I have faith in the theatrical market in the long run.”