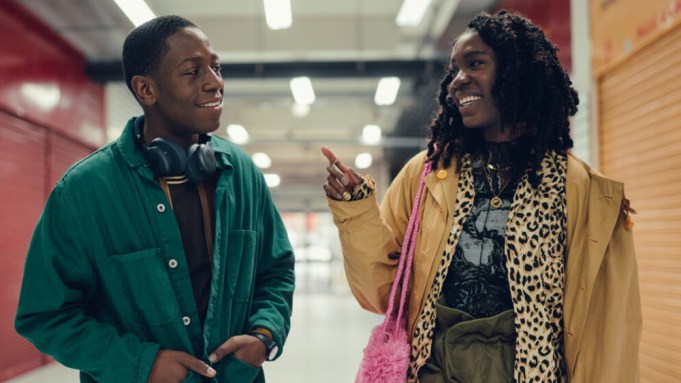 Breathing fresh life into the rom-com genre, Raine Allen Miller’s Rye Lane is a delight. Premiering at Sundance, it pays affectionate tribute to its forebears while injecting a youthful British energy reminiscent of seminal TV shows such as Skins. This is a sunny, irreverent take on life and love, following two strangers over the course of one eventful day, and more — though it’s at its most exhilarating when playing out in real time, Before Sunrise-style.

The opening scenes capture the culture clashes and archetypes of contemporary South London — or Peckham, to be precise, which is home to the titular Rye Lane. Flitting between the cubicles in a unisex bar toilet, the aerial camera shows a young man being beaten up, a parent changing a baby’s nappy, teens taking selfies, girlfriends drinking and vomiting. When Dom (David Jonsson) enters the cubicle solo, he starts doing what many audiences won’t expect: crying. His sobs soon are overheard by Yas (Vivian Oparah), who seems to be the only person using the toilet for its intended purpose.

The pair begin a conversation and continue it over a vaguely mutual friend’s art exhibit. Turns out he was dumped by his girlfriend and is on the way to meet her to talk things through. His half-hearted attempts to shake off Yas along the journey fail: This is a woman on a mission. There are definitely shades of the “manic pixie dream girl” trope in this spontaneous character, but she also has agency, her own story and is not simply in service of the male lead.

The script from Nathan Byron and Tom Melia also has fun at the expense of its hero and heroine’s romantic woes: One of its messages is not to take yourself too seriously. Most one-liners land — from the broad to the observational, this often is laugh-out-loud funny, helped by a strong supporting cast playing everything from ex partners to lesbian moms.

There’s imaginative visual flair in the storytelling. When Yas and Dom tell each other tales about their recent past, it’s not just a flashback: The characters are put into the picture, watching their old selves, recalling everything from Back to the Future Part II to Being John Malkovich.

The main movie references come from the romantic comedy genre itself. As the pair flit between parks, karaoke bars, house parties and food markets, eccentric strangers wander in and out of the frame. Some are familiar — either cameos or tributes to well-known British rom coms from Bridget Jones’s Diary to Love, Actually. It’s an amusing way to note the legacy Rye Lane comes from but also to highlight how it is shaking up the norm. The characters at the center of this story previously might have been in the supporting cast of such films — or absent entirely.

There have, of course, been British romantic comedies with a predominantly Black cast before, such as 2018’s Been So Long and 2021’s Boxing Day. But they are rare — and Rye Lane feels like a big, energetic bounce forward for the genre as a whole.