When Saudi Arabia announced it was opening movie theaters for the first time in 35 years back in late 2017, there was excitement from international exhibitors and Hollywood studios who saw a fertile new market of opportunity. Importantly, 70% of the Kingdom’s 34M population is under 30 and has money to spend.

And spend they have, with impressive box office progression. From April 2018 through late December this year, grosses reached over $454M, per comScore. Even with the Covid shutdown in 2020, that year saw a 26% increase on 2019. This year so far is already 85% bigger than last at about $230M. Saudi currently ranks as the No. 14 global market (although that comes with an asterisk given Covid impact elsewhere).

Says one international distribution exec of Saudi’s potential, “It’s going to be really important. It’s going to be a billion-dollar market.” High ticket prices (about $16-$18 each) will also help push it ahead.

Adon Quinn, who is Deputy CEO of major exhibitor Muvi Cinemas, expects the $1B milestone to be crossed by 2025, earlier than initial expectations. “We see hitting the 1,500 screen mark around 2025/2026. Once we get to that screen level, that’s when those numbers can be realistically achieved,” Quinn said.

Mohamed Al Hashemi, Country Head for KSA at Majid Al Futtaim which owns the Vox chain, was a bit more bullish, expecting the $1B threshold to be crossed in late 2024. Whenever it hits, it will rep a staggering 926% growth from 2019, the first full year the market was open. 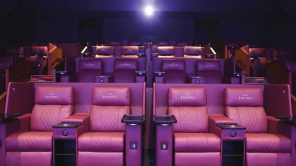 While cinemas offer a premium experience, the Kingdom remains underscreened, with about 330 in operation. The initial fanfare of potential foreign investment cooled in the wake of the 2018 murder of journalist Jamal Khashoggi. And during the pandemic, exhibitors became intensely focused on their core areas of business which slowed expansion. But now we hear ambitious plans are being formulated to build out cinema infrastructure. Says one international distribution exec, “I hope the pandemic doesn’t sidetrack that because in 12-18 months, that would be a lot more theaters.”

The Emirates-based Vox recently opened its 15th multiplex in the Kingdom and now has 154 screens while Muvi just opened its 18th site. Exhibition giant AMC is also active in the market with roughly 65 screens. CEO Adam Aron recently told the Wall Street Journal that the pandemic slowed the pace of its cinema openings, but that the company is “perfectly happy and content” with its expansion.

Ignace Lahoud, a Disney veteran who is now CEO of Vox owner Majid Al Futtaim, told Deadline, “By all metrics, there’s still a lot of room for growth.”

Vox, which is also a distributor, is currently in six cities and has plans to continue expanding, notably into into Tier 2 areas which are expected to lean towards local fare. “There will be a gradual growth in the share of Arabic content. It’s important to not be fully dependent on Hollywood,” Lahoud contends.

To wit: Egyptian comedy A Stand Worthy Of Men (Waafet Reggaala) is the biggest title since movie theaters were reinstated, grossing over $15M this year (and with a sequel coming in 2022). In 2020, 10% of movies released were Arabic-language and accounted for 28% of the box office, we’re told.

In terms of Hollywood, tastes run primarily to blockbuster (and indie) action, superhero/comics (if the mythology is familiar) and G-rated family fare. A nice surprise recently has been the performance of Warner Bros’ adult-skewing drama, King Richard, which counts Saudi as its lead overseas market.

Studio titles are released by regional outfits including Vox, Italia, Four Stars and others which handle local marketing. We’re told that the market is not yet big enough for the studios to set up their own operations and that the the overhead makes it a bit “daunting,” though it may be “something to look at” in the future.

On its first weekend, Sony/Marvel’s Spider-Man: No Way Home had the biggest opening ever in the Kingdom with $5.2M. Quinn told me that the first day of NWH was 190% bigger than any previous launch day at Muvi’s cinemas. He says, “We strongly believe in the market,” but “like every other market, it is reliant on content.”

After a strong summer, a dip in KSA admissions during the fall may be attributable to a lack of blockbuster titles, while other entertainment activities are sprouting up. One distribution exec tells us the market is “on steroids, everything is happening there.” That includes concerts (Justin Bieber performed in Jeddah this month) and the recent Formula One racing event, the likes of which were “unthinkable three or four years ago,” Lahoud said, adding, “Clearly there is an awakening and a hunger for opening and leisure entertainment, art, culture.”

And yet, human rights issues remain a concern. Under his Vision 2030 plan, Crown Prince Mohammad bin Salman has been seen as a progressive, but the Kingdom still does not recognize LGBTQ rights, for example. 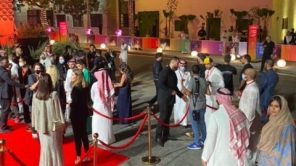 As the recent Red Sea International Film Festival kicked off — providing a showcase for the Kingdom’s desire to embrace culture — we revealed that Steven Spielberg’s West Side Story was not given a distribution certificate in the market, ostensibly because it features a transgender character.

Similarly, in early November, Disney was asked to make edits to Eternals — which included a same-sex kiss — in order to pass censorship. The studio refused, and Eternals was not released.

Eternals might have done upwards of $5M in the Kingdom, so that’s a small pinch, but West Side Story may not have reached $1M.

If Saudi continues to grow apace in the coming years, that could result in a bigger impact to a film’s box office if it runs afoul of censors. But we are assured that studios are accustomed to facing these types of issues across the Middle East (and in some South East Asian markets that have strict rules based on religious beliefs). In most cases, films are either not released or intimacy is eliminated across the board.

One distribution executive familiar with Saudi told us they believe censorship will ease, but not overnight. “Things are going to be done in an unconventional way, this is a big step to them.”

Lahoud said, “As exhibitors, our goal is to be able to cater to as many movies as possible. But, we also have to abide by local laws — and censorship is a reality in this part of the world… We do our best to navigate those waters.” He remains optimistic, “Four years ago, there was no cinema at all and now you go and can take your boyfriend or girlfriend. Three years ago, we still had segregation. I think that’s fantastic progress… This is a journey.”