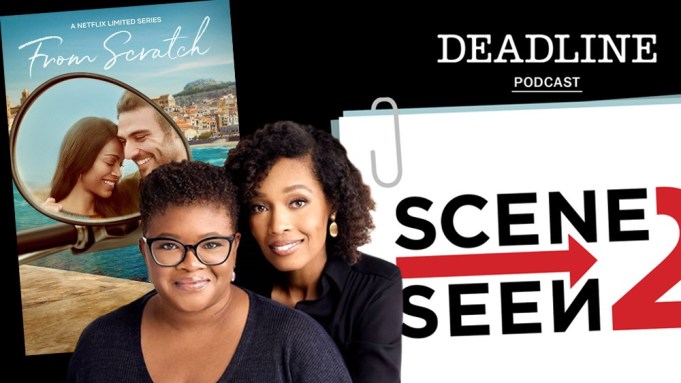 The Lockes are the guests on this week’s edition of the Scene 2 Seen Podcast.

From Scratch is a cross-cultural love story that follows Amy (played by Saldana), an American student studying abroad in Italy, as she meets and falls in love with Lino, a Sicilian chef. Their whirlwind romance faces many unforeseen challenges, including their very different cultural backgrounds of which Lino’s family is not accepting of Amy’s. But when Lino is faced with unimaginable health challenges and the couple’s future is threatened, the two families come together to create an extended family unlike any they could have imagined, proving that love crosses all borders.

The From Scratch series is based on the autobiographical book of the same name written by Tembi Locke. The story was written to inspire people to embrace resilience, love and the power of community with their work. She put pen to paper and began the cathartic experience of writing down her personal story. After being picked up by Simon and Schuster, the book hit the New York Times bestseller list and was chosen as a 2019 Reese’s Book Club pick, and quickly picked up by Reese Witherspoon’s production company Hello Sunshine and Netflix.

Besides being a bestselling author, Tembi is also a TV producer, actor, screenwriter and advocate who is a nationally recognized keynote speaker on topics of resilience, loss and motherhood. She has also created online courses for caregivers, stemming from her years caretaking for her late husband.

Attica Locke is also a bestselling author who has written five novels and been honored with myriad accolades including an Edgar Award, the Harper Lee Prize for Legal Fiction, the Ernest Gaines Award for Literary Excellence, an NAACP Image Award, and a Los Angeles Times Book Prize among others. A former fellow at the Sundance Institute’s Feature Filmmakers Lab, Attica is also a screenwriter and producer, with credits that include Empire, When They See Us and the Emmy-nominated Little Fires Everywhere, for which she won an Image Award for television writing.

These are two powerful ladies. They knew how to conceptualize, they played off of one another’s strengths, protected each other through this experience, and have a sisterly bond that is genuine and nurturing. We engage in a powerful conversation about travel, showrunning in a foreign country, and working with Witherspoon.