Sing 2 writer-director Garth Jennings still doesn’t know “what magical fairy helped me” secure pop music icon Bono for a crucial role in the sequel to his blockbuster animated musical-comedy, but he suspects it’s all about the eclectic spectrum of songs the film employs.

“When we went after him, I didn’t think he would say yes,” Jennings admitted Sunday at Deadline’s Contenders Film: Los Angeles panel. But the filmmaker was pleased to discover that the U2 frontman had been a fan of the original 2016 film. “He mentioned the fact that it reminded him of AM radio — in that we had a mix of music, a vast array of music — and he always loved that,” Jennings revealed.

Sing 2 follows after the events of the first movie as Buster Moon (Matthew McConaughey) plans to debut a new show in Redshore City. After making some ridiculous promises to secure the venue, Buster goes on a quest to find reclusive rock legend Clay Calloway and convince him to join the show.

Joining the all-star array of voice actors who return for the sequel – including McConaughey, Reese Witherspoon, Scarlett Johansson and Taron Edgerton – Bono takes on a role central to plot. 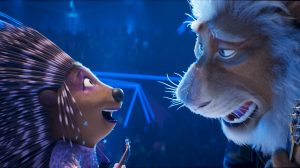 “He plays a big old lion called Clay Calloway, who was a legendary rock star and then just went off the radar,” said Jennings. “His wife died and he became a recluse, and no one really knows if he’s still alive or not. And our heroes have promised him in their show, because he’s just this huge star. So they say, ‘We can get him!’ And of course, it turns out to be a lot harder than they thought — not only to find him but then to actually convince him, because he’s so far gone from that world now.”

Jennings said Bono “loved the idea of this character sort of steeped in grief, and that music would somehow heal him – it’d be a sort of healing story. He almost pitched the character back to me! … So it’s a very emotional story. And he completely nailed that. It’s really quite remarkable what he did.”

Jennings also was floored by another voice actor’s performance of a seminal U2 song for the film, when Scarlett Johansson took on “Stuck in a Moment You Can’t Get Out Of.”

“All the actors had to sing their own parts – that’s the deal,” he said. “Scarlett’s just seems to be able to do anything. … She did it to playback originally, and then on the very last take, I just said, ‘Would you mind trying this just live, with the engineer [who was also a guitarist]? He’s going to play, we’ll dim the lights, and we’ll just try to get something very intimate.” And she just nailed it in one take. And that’s the exact take [we used]. … She just has this amazing ability to just zero in on exactly how the thing should work and how it should sound, and with all this feeling.”