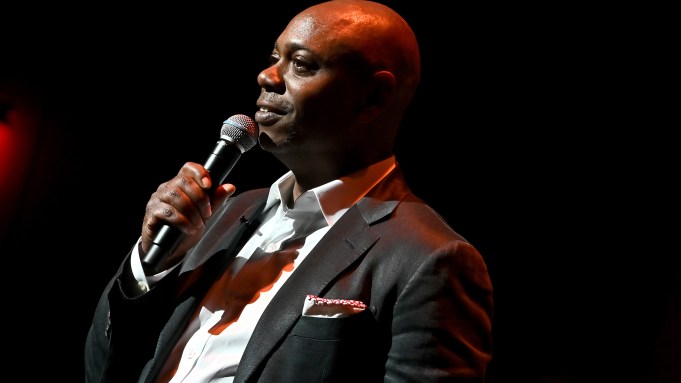 Chappelle, a controversial comedian who has been accused of insensitivity in the past surrounding his observations about trans people, Jews, Blacks and others, did a long take to open SNL regarding recent issues involving rapper/entrepreneur Kanye West and basketballer Kyrie Irving.

“We shouldn’t expect @DaveChappelle to serve as society’s moral compass, but disturbing to see @nbcsnl not just normalize but popularize #antisemitism,” said a tweet from the ADL’s Jonathan Greenblatt today. Why are Jewish sensitivities denied or diminished at almost every turn? Why does our trauma trigger applause?”

At the start of his routine, Chappele unfolded a small piece of paper and read from it, saying, “‘I denounce antisemitism in all its forms. And I stand with my friends in the Jewish community.’ And that, Kanye, is how you buy yourself some time.”

Then he got to the meat of the bit. Chappelle noted that he had come to learn that there are “two words in the English language that you should never say together in sequence: ‘The’ and ‘Jews.’”

“I’ve been to Hollywood and — no one get mad at me — I’m just telling you what I saw,” he said, adding a signature pause. “It’s a lot of Jews. Like a lot. But that doesn’t mean anything! You know what I mean? Because there are a lot of Black people in Ferguson, Missouri, it doesn’t mean we run the place.”

Chappelle finished his long monologue by underlining his point.

“It shouldn’t be this scary to talk about anything,” he said.. “It’s making my job incredibly difficult. And to be honest with you, I’m sick of talking to a crowd like this. I love you to death and I thank you for your support. And I hope they don’t take anything away from me… whoever they are.”

The Forward, a Jewish-focused nonprofit media outlet, said Twitter reaction to Chappelle’s routine was mixed. It noted The Jerusalem Post accused the comedian of “engaging in antisemitic tropes.” Adam Feldman, theater critic for Time Out New York, tweeted: “That Dave Chappelle SNL monologue probably did more to normalize anti-Semitism than anything Kanye said.” Screenwriter Amalia Levari tweeted, disapprovingly, “So cool that SNL gave Chappelle the stage to deliver a TED Talk about how antisemitic dog-whistles are good, actually.”

Wrote Rabbi Josh Yuter, an influencer on Jewish Twitter: “As I understood Chappelle’s monologue, the key point is that there are double standards regarding who can say what about whom. If my Twitter feed is any indication, everyone agrees this is a problem though there’s rampant disagreement over the details.”

We shouldn't expect @DaveChappelle to serve as society's moral compass, but disturbing to see @nbcsnl not just normalize but popularize #antisemitism. Why are Jewish sensitivities denied or diminished at almost every turn? Why does our trauma trigger applause?