Pedro Almodóvar’s Parallel Mothers opened to an estimated $41,076 this weekend on three screens for a PSA of $13,692 over three days. Distributor Sony Pictures Classics co-president Michael Barker calls that cume conservative, anticipating $42-$43K for the Penelope Cruz-starrer that he said has been attracting a diverse new audience to Almodóvar, including younger moviegoers.

“We’re thrilled with the opening. This last week has been really nerve-racking. We didn’t know what to expect. They were closing down live theater, restaurants in my neighborhood were closing on certain days,” Barker said. He attributed the solid showing amid Omicron headwinds to a combination of great reviews, strong word of mouth and kudos for Cruz in what some are calling her best role.

The film will expand through Jan. from its perch (at Lincoln Center and the Angelika in NY and the Landmark in LA) adding locations each weekend to peak at several hundred screens in all top 50 media markets and some smaller towns. The first jump next weekend will include San Francisco, Chicago and Washington, D.C.

Parallel Mothers closed the New York Film Festival this fall, cheered by a young crowd that’s joined the core older, gay and female fan base for the Spanish director.

He’s an important one for Sony Pictures Classics, which has rights to his entire library and, Barker said, increasingly finds new homes for it at festivals on platforms and streamers. HBO Max, for instance, showcased Almodóvar films last spring as part of the TCM Classic Movie Festival (including Women on the Verge of a Nervous Breakdown, Volver (Best Actress Oscar nod for Cruz), The Skin I Live In and short film The Human Voice with Tilda Swinton.

“These sites are looking for diverse programming and it’s a breath of fresh air. A new revenue stream, that is great. And it’s great to have the entire library when you are opening the latest film,” Barker said. This one, which also stars Milena Smit and Rossy de Palma, follows two women, Janis (Cruz) and Ana (Smit), who meet in a hospital room before giving birth and develop a close bond that complicates and changes their lives in dramatic ways. See Deadline Review here.

More broadly, Barker thinks the specialty film market (which seemed on the verge of a nascent recovery a month ago) “has taken a few steps back because of Omicron. But I think it will come back really strong.” 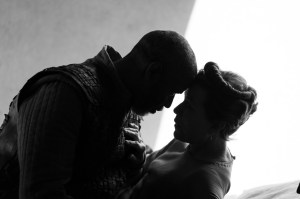 The other high-profile specialty opening, Joel Coen’s The Tragedy of Macbeth from A24 and Apple, looks set to earn about $110K over two days (Sat./Sun.) from circa 20 locations – that is only according to estimates from a distribution source since Apple doesn’t report grosses. It would mean a PSA of $5.5K for the black-and-white Shakespeare adaptation of the murderous, complicated power couple starring Denzel Washington and Frances McDormand.

As per Deadline’s Specialty Preview Friday, Macbeth was set to open in 30 theaters in North America with a limited expansion in January to 125-200 screens. It hits Apple TV+ on Jan. 14.  In a note today, A24 noted multiple sellouts across all 12 opening markets for the film, playing to a wide age range, and that it’s highly ranked across all complexes trailing only Spiderman in multiple locations.

A notable expansion: Licorice Pizza from United Artists Releasing went from four screens in two markets (NY/LA where it launched Nov. 28 to what UAR called a record per screen average of $83.8K) to 786 runs in 133 markets on Saturday. It has an estimated weekend gross of $2.3M, for a PSA of $2,962 and a cume of $3.7M.

UAR said 66% of the audience for the MGM Paul Thomas Anderson’s 1970s teen comedy was in the 18 to 34 year-old demo and that it expects the film to continue to build momentum.

It played best on the coasts (led by NY/LA), did well in Chicago, San Francisco, Washington, D.C., Minneapolis and some smaller locales — like Bend, Oregon. “I’m really pleased with the results, and the fact that we can do as much or more than some of the big films in a third of the theaters,” said UAR distribution chief Erik Lomis. (Sony’s A Journal for Jordan, for instance, earned $2.2M on 2,500 screens.)

Lomis said he was happily surprised by the young demos turning out. “I would have said, ‘No way, the audience has to be older, at least 50% over 35’. The fact that we are appealing to a younger group speaks to the playability and long term viability of the movie.”

The 18-35 crowd has sparked this year’s box office recovery, in particular by piling into Spider Man: No Way Home. But the over-35 demo crucial to arthouses and specialty film has been much slower to return since Covid, and the Omicron hiccup hasn’t helped. Specialty distributors hope headlines – like rapidly falling cases in South Africa, where the variant was first discovered — are a sign that things could reset sooner rather than later.

As for Licorice Pizza, “Once word of mouth gets out there over the holidays, people like an original story, and it’s a joyous story. And [with] everyone consumed with Spider-Man there has to be an alternative,” said Lomis. “It’s fun, original and people really, really enjoy it. This is a marathon, not a sprint.”

Meanwhile, UAR’s holdover House of Gucci, one of the few adult-skewing movies to make a dent at the box office this year, hit a cume of $47.2M in week five after a three-day $922K weekend.

In a new release, Reliance Film reported a weekend gross of $1.76M for its film by Kabir Khan called 83 at 481 locations – a PSA of $3,662. The Bollywood cricket-themed pic is the true story of the underdog Indian men’s cricket team led by Kapil Dev (Ranveer Singh) that defeated reigning champions the West Indies at the 1983 World Cup finals.

Sideshow/Janus Films’ release of Ryusuke Hamaguchi’s critically acclaimed Drive My Car, in week five, grossed an estimated $19,172 on 16 screens for a per-screen average of $1,198 and a new cume of $271,848.