Neon’s Spencer with Kristin Stewart rang in an opening weekend of $2.149 million on 996 screens, a per screen average of $2,158 as the film failed to connect in a market that remains a stubbornly hard sell for specialty and independent films.

The well-reviewed (with raves for Stewart as Lady Diana) reimagining by director Pablo Larraín of a few fateful days at the Queen’s Sandringham Estate when the most famous royal marriage imploded took in an estimated $783,110 Friday; $780,697 Sat.; $585,522 Sunday.

Edgar Wright’s Last Night In Soho in 3,016 theatres took in $1.8 million its second weekend out for a total cume of $7.7M. Los Angeles was the top market, followed by New York, Chicago, San Francisco, Dallas, Boston, Toronto (which broke into the top ten this weekend), Washington, D.C., Philadelphia and Denver. The Music Box in Chicago, Village East in Manhattan, Alamo Brooklyn and Forum in Montreal were among the top ten best performing theaters, said distributor Focus Features. The psychological thriller follows Eloise, an aspiring fashion designer, mysteriously able to enter the 1960s where she encounters a dazzling wannabe singer and a dark secret.

Looking good was The French Dispatch in week three with a $2.6M weekend gross — and $8.4M total cume — as it added 417 theaters to reach 1,205. The Wes Anderson film “has managed to carve out a spot … as the specialized adult film to see,” said distributor Searchlight Pictures. It was no. 6 at the North American box office. 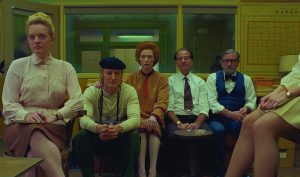 Angelika Manhattan was the strongest grosser (up 15%) along with the Landmark West L.A. (up 18%) and the E-Street in D.C. (up 21%). Searchlight gave a shout-out to the Lincoln Square in Manhattan, the Belcourt in Nashville Tenn., Coolidge Corner in Boston, Claridge in Montclair NJ, “virtually every run in Brooklyn” and, north of the border, Vancouver, Toronto, and Montreal. Top newly added markets/theatres included the Neon in Dayton Ohio, Rialto in Raleigh, Sun-Ray in Jacksonville and the Amherst in Mass.

“The film continues to be the catalyst for the re-awakening of the specialized market. We have sort of hit our stride with the film and will continue to hold in many of the most important art houses and upscale venues across the U.S. and Canada even as the marketplace is soon to be saturated with product,” Searchlight predicted.

Netflix release Red Notice in 750 theaters had a 3-day of $1.25M-$1.5M, according to my colleague Anthony D’Alessandro. Netflix doesn’t report ticket sales, including for this big budget action film with Dwayne Johnson, Gal Gadot and Ryan Reynolds. 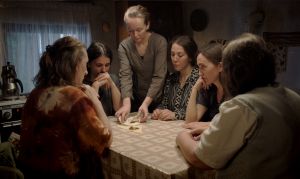 And drama Hive, from Zeitgeist Films and Kino Lorber — Kosovo’s Oscar entry — earned an estimated $13,755 on one screen for its opening weekend at the Film Forum in New York. Zeitgeist co-presidents Nancy Gerstman and Emily Russo are “gratified to see the film getting its due from the press and the public.”

“And not only are people appreciating the quality of the film, as did the Sundance juries [the film won World Cinema Audience, Directing and Grand Jury Prize] but Yllka’s Gashi is particularly being singled out for her astonishing performance as the protagonist, Fahrije.” Hive opens in LA and select markets Friday.

IFC Film’s Hollywood satire The Beta Test, on 25 screens and on demand, grossed an estimated $18,500 from 25 theaters opening weekend.

And Greenwich Entertainment’s The Rescue closed in on $1M in week five. When it hits that mark, sometime this week, the distributor said, it will become only the third documentary to exceed $1 million in box office so far this year behind Roadrunner: A Story about Anthony Bourdain (from Focus, at $5.2 million) and Summer of Soul from Searchlight (at $2.3 million).