SATURDAY AM UPDATE: The first weekend of 2022 for all movies is looking at $100.6M, an amount that’s 700% ahead of New Year’s weekend 2021 when most theaters where closed due to Covid, but behind 29% two years ago in 2020 when Covid didn’t seem to be a threat stateside.

A handful of adult-skewing and family titles saw upticks on New Year’s Eve over Christmas Eve in ticket sales, i.e. The King’s Man, West Side Story, Ghostbusters: Afterlife, Nightmare Alley and Licorice Pizza, while the alpha movie Sony/Marvel’s Spider-Man: No Way Home recessed with $15.45M, -21%. Sony is expecting $48M for weekend 3 of the MCU title, while industry estimates are higher between $50M-$60M, based on moviegoing powering back today. Off Sony’s estimate, Spider-Man: No Way Home gets to $605.1M by EOD tomorrow. Should No Way Home click past $608.58M, then it beats Disney/Pixar’s Incredibles 2 and becomes the 10th highest grossing movie at the domestic box office of all-time. 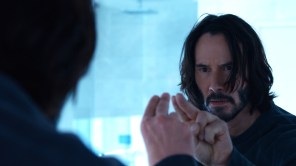 Warner Bros/Village Roadshow’s The Matrix Resurrections is estimated to have a 72% ding in its second weekend, no thanks to its availability to HBO Max subscribers. You’ll remember a year ago, even with box office capitals NYC and LA closed, Wonder Woman 1984 took a 68% second weekend tumble due to the HBO Max factor. A B- CinemaScore and reviews like CNN’s “The Matrix Resurrections takes the red pill, but works more like a sleeping pill” aren’t creating want-to-see as the second guy moviegoer choice in a Spider-Man heavy marketplace. I’ve heard whispers, but nothing official, that the 5-day streaming household figure for Matrix Resurrections was over 8M (Samba TV in Smart TV households measured 2.8M sans mobile), and if that’s the case, gosh, this same day availability of theatrical movies in the home really doesn’t create an event on the big screen does it? The Lana Wachowski directed and co-written sequel is the last of WarnerMedia’s theatrical day-and-date titles on HBO Max for calendar 2021. Warners goes back to releasing event movies on a theatrical window for 2022 starting with March 4’s The Batman which many already believe will be 2022’s first huge opening, possibly north of $100M.

Here’s how the New Year’s weekend box office is looking:

FRIDAY AM UPDATE:Thursday box office figures Sony/Marvel’s Spider-Man: No Way Home now ranks No. 11 on the list of highest grossing movies at the domestic box office with $557.19M collected during its first two weeks in release. The MCU title outpegs Jon Favreau’s 2019 version of The Lion King with $543.6M. The 14-day gross for No Way Home is the third highest of all-time behind Avengers: Endgame ($660.4M) and Star Wars: Force Awakens ($652M).

While weekend 2 was steeper for the Jon Watts-directed sequel at -67.5%, that’s because Christmas Eve slowed ticket sales last Friday. This weekend isn’t expected to be so severe despite New Year’s Eve tonight. The second weekend decline for No Way Home was in line with Star Wars: The Last Jedi which was down 68% in weekend 2 with Christmas Eve on a Sunday in 2017, and not far from 2016’s Rogue One: A Star Wars Story‘s percent drop which was -59% in its second session with Christmas Eve falling on a Saturday.

Industry expectations expect No Way Home to be down about -40% for a $50M third weekend at a revised theater count of 4,206, which would get the MCU sequel to $607.2M. Kids are still on break Monday with Comscore reporting 48% K-12 off and 90% colleges. It’s not until Monday, Jan 24 when we see these holiday break levels drop to the single digits. Still, these big Christmas event movies typically slow down, and ease below a weekday of $10M starting the Monday after New Year’s Day.

No Way Home grossed $20.6M at 4,336 theaters on Thursday, +2% from Wednesday, making it the second highest Dec. 30th take for a movie and second highest Thursday gross of all-time.

Illumination/Universal’s Sing 2 made $7.75M at 3,892 theaters yesterday, +3% from Wednesday for a 9-day total of $70M. The first film, which opened on the Wednesday before Christmas back in 2017 actually was +22% in weekend 2 with $42.8M, and that’s with New Year’s Eve falling on a Saturday. This family movie is in very good hands as the second-best choice for the masses to see after Spider-Man: No Way Home, and it’s $20M from overtaking Disney’s Thanksgiving animated film Encanto. Sing 2‘s 3-day came in at $22.3M.

20th Century Studios/Disney/MARV’s The King’s Man earned $1.37M in third yesterday, +10% from Wednesday for a running total of $14.9M. The industry outlook is that the Matthew Vaughn-directed prequel will be off 25%-30% in its second weekend after an initial 3-day of $5.9M. The King’s Man will hold its current 3,180 theaters in weekend 2.

The lackluster audience reception and HBO Max in-home availability is expected to drag down The Matrix Resurrections in weekend 2 after seeing a 3-day of $12M.  Warner Bros. tentpoles which were available on HBO Max day-and-date saw huge drops in their second weekends when both NYC and LA had theaters open, i.e. Dune (-62%), Mortal Kombat (-73%) and The Suicide Squad (-72%). The Lana Wachowski-directed and co-written sequel made an estimated $1.3M in fourth on Thursday at 3,552, +2% from Wednesday for a 9-day of $27.1M.