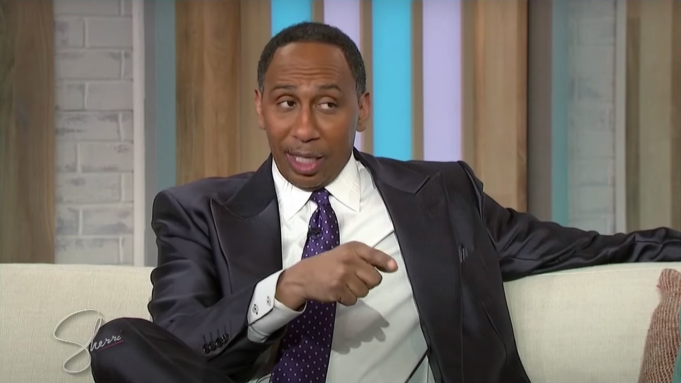 “There’s just certain things you don’t talk about,” said Sherri Shepherd on her syndicated talker today. She then indicated those verboten topics are “politics, religion and Rihanna vs. Beyoncé.”

Comments by ESPN personality Stephen A. Smith to Shepherd on that last subject yesterday ignited a firestorm of protest from not just the Sherri studio audience, but also from Rihanna’s fan base.

Here’s part of what the First Take star said. For context, Smith was asked for his thoughts about Rhianna’s upcoming Super Bowl Halftime performance.

I don’t want to say I’m not excited. She’s fantastic. That’s not where I’m going with this. She’s a lot of things. She’s spectacular. And congratulations on new mama hood. There’s one thing she’s not: She ain’t Beyoncé. [Audience boos] The only reason I brought up Beyoncé is because Beyoncé recently performed at the Super Bowl. And without Bruno Mars and Coldplay.

For Smith, who is ESPN’s highest-paid personality precisely because of such hot takes, comparing two superstar musicians and choosing one over the other likely seemed like good TV. But there’s a difference between comparing and ranking performers in an inherently competitive arena like sports and comparing and ranking performers in the more subjective realm of entertainment. Especially when those performers are two Black women in an industry which still struggles with racism and sexism. Today, Shepherd put her finger on one of those hot buttons.

“Stephen A., he’s used to being on his show First Take,” the Sherri host observed, “and he’s used to a bunch of men. But he ain’t never got in front of an audience of women. When he did it, I was like ‘Oooooohhh.’ “

For his part, Smith apologized not once but twice.

First, he posted a video trying to provide context saying he would compare anybody who does the Super Bowl halftime show to iconic performances from Beyoncé, Coldplay and Bruno Mars.

“Michael Jackson could still be alive and I would say, ‘He’s gotta measure up to that,’ ” contended Smith in the clip. “I’ve always said that. I meant it as no disrespect to Rihanna. I know she’s phenomenal, and she’s my sister. Nothing but love for her. But Beyoncé is my sister too. I got love for both of them. I just think that Beyoncé is the greatest performer out there today.”

Just minutes after posting that video, in a series of tweets the ESPN personality called his TV comments a “horrific mistake” and “something that was suppose [sic] to be a fun moment on the Sherri Shepard show has gotten out of hand.”

He continued, “My apologies again to Rihanna. And just to be clear, I’m a huge fan. Sherri and I were just having fun. That is all.”

Horrific mistake. Something that was suppose to be a fun moment on the Sherri Shepard show has gotten out of hand. An overzealous member on my MGMT team — which has access to my account — posted something I would NEVER say about @rihanna, her fans or any other artist. The post…

Has been removed. My social management team will never make a mistake like this again. My apologies again to @Rihanna. And just to be clear, I’m a huge fan. Sherri and I were just having fun. That is all.

Those posts had been viewed more than 10 million times by midday Thursday.