Longtime General Hospital cast member Steve Burton is leaving the ABC show due to his refusal to comply with the production’s Covid-19 vaccine mandate.

Burton confirmed his long-rumored departure on Instagram today. “I know there’s been a lot of rumors and speculations about me and General Hospital and I wanted you to hear it from me personally,” he says in the video. “Unfortunately, General Hospital has let me go because of the vaccine mandate.”

Watch the video below.

Burton goes on to say he sought medical and religious exemptions to the mandate but was denied by the production on both counts. “Which, you know, hurts,” he says, “but this is also about personal freedom to me.” After expressing thanks to fans – noting that he practically grew up on the show – he says, “Maybe one day if these mandates are lifted, I can return and finish my career as Jason Morgan. That would be an honor.”

Burton, who filmed his final episode on Oct. 27, says in the video he does not know when his last airdate will be, indicating it might have already aired. So far, his last appearance was on Friday, Nov. 19, when his character, Jason Morgan, ran into a collapsing tunnel on a rescue mission and was buried in falling debris. Jason was declared missing in Monday’s episode, with Laura Wright’s Carly character leaving a message on his phone: “I hope you’re staying safe and you come home soon.”

A source close to the show confirms that Burton is no longer part of the General Hospital cast due to his failure to comply with the mandate.

Burton revealed his Covid-positive status in August when he and GH co-star Bradford Anderson, performing as a comedy and musical duo called Stone Cold and The Jackal, canceled a series of East Coast performance dates.

With his departure, Burton becomes the second GH cast member to leave the show due to failure to comply with the mandate. Yesterday, weeks after ABC confirmed that Ingo Rademacher had left the production, his character, Jasper “Jax” Jacks, made his onscreen goodbyes, telling another character, “I’m kind of on the outs with everyone in Port Charles right now.”

As the mobster Jason Morgan, Burton has been a major player in the GH town of Port Charles for most of the last 30 years. Burton joined General Hospital in 1991 as the wholesome, wealthy scion Jason Quartermaine, a character who underwent a major personality transformation following a car accident in 1995. After emerging from a bout of amnesia, Jason Quartermaine became Jason Morgan, right-hand man to mob boss Sonny Corinthos (Maurice Benard).

Save for a five-year stint on CBS’ The Young and The Restless from 2013 to 2017, Burton has played the Jason character for three decades, one of the show’s longest-running portrayals. In 2007, Burton played Jason in the primetime GH spin-off General Hospital: Night Shift.

The GH role won Burton the first of his two Daytime Emmy Awards: After winning for playing Jason in 1998, the actor won a Daytime Emmy in 2017 for his Young and The Restless role.

Burton’s other TV credits include Taken and Days of Our Lives. 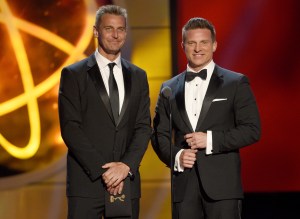 Though his anti-vaccine mandate stance has garnered considerable attention, Burton has been spared the level of controversy surrounding Rademacher, whose outspoke stances on the vaccine and transgender issues have angered castmates including Nancy Lee Grahn and transgender actor Cassandra James. Just the day before his recent departure from the set was confirmed, Rademacher wrote an Instagram post widely interpreted as transphobic (he re-posted a photo of Rachel Levine, the U.S. assistant secretary for health and first transgender four-star officer, that was captioned with the word “dude.”) In a subsequent Instagram video, he apologized for the “dude” reference but insisted, “I don’t think it’s okay to call a transgender an empowered woman because where does that leave women?”

In a question and answer Twitter thread with fans yesterday, Grahn, who was the first cast member to publicly express her displeasure over working with unvaccinated castmates, was asked whether she was “happy” that “a certain person got canned.”

Grahn responded, “None of this makes me happy. Extreme right wing antics sadden me. Aside from that plz note that they were not canned but unfortunately had 2b written out due to vaccine mandates. It’s company policy to be vaccinated, which I fully support & they chose not to giving #GH no choice.” When the questioner said she wished Burton well, Grahn replied, “As do I.”