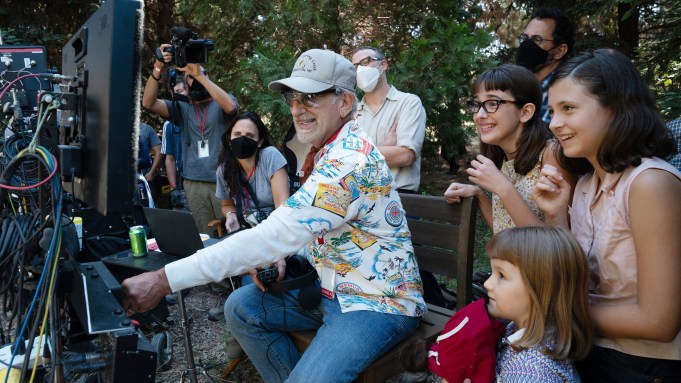 And while Spielberg already counts three Oscar wins –two for directing Saving Private Ryan and Schindler’s List and Best Picture for the latter– today the blockbuster filmmaker of Indiana Jones and Jurassic Park celebrated his first screenplay nomination ever, in the original category, for The Fabelmans.

“I just recently turned 76, where they say, ‘What’s left to accomplish?’ I suddenly get nominated for the first time in my career by the Academy as a co-author of Best screenplay — it made me feel like all those English and creative writing classes paid off!”

'The Sea Beast' Director Chris Williams On Oscar Nom & His Incredible Team Of Animators: "They Deserve The Recognition"

While Lincoln scribe, Tony Kushner, encouraged Spielberg to start putting his memories down on paper, the project didn’t come to life until after the death of the Jaws director’s parents, plus the onset of the pandemic.

That long delay for The Fabelmans in Spielberg’s career was never due to writers’ block nor the need to paint the most perfect portrait of his life.

“I had to be ready to tell the story and I wasn’t for a long time and for a lot of reasons. I guarded my privacy jealously,” the director says who has put parts of his life in his blockbuster movies “through the smokescreen of science fiction, adventure or historical fiction.”

Soon after his parents passed, Spielberg got the urge.

“When you’re orphaned, you don’t know what that feels like until it happens,” he says, “It’s profound, it has profound consequences.”

Due to the pandemic impact’s on adult moviegoing, The Fabelmans as a drama was a slow-go at the box office, currently counting under $15M domestic (under the $22.2M of Spielberg’s 1987 war movie Empire of the Sun) and $21.6M worldwide.

However, Spielberg isn’t pessimistic about the future of theatrical or adult dramas on the big screen.

“I think it will come back, but it’s coming back slowly, especially for dramas,” says the director.

Per Spielberg, 1917 would still fare well today, however, “American Beauty probably wouldn’t have done anywhere what it did in 1999.”

“I think the pandemic really encouraged a lot of audiences, not just middle-aged audiences, but younger, to stay at home and watch on the medium screens in their houses.”

“We have a social need to be together in the world, I don’t think that will be stopped by a pandemic,” says Spielberg about the anticipated return of adult pics at the box office, “It can be frustrated by the pandemic, but eventually we’ll see more adult films doing decent numbers in movie theaters.”

As the director of such Oscar-nominated Best Picture tentpoles like Close Encounters of the Third Kind, E.T. and Raiders of the Lost Ark, Spielberg was happy about the breakthrough of such blockbusters as Top Gun: Maverick and Avatar: The Way of Water in Oscar’s Best Picture slot, the combined two pics counting a combined global gross of $3.5 billion.

“I’m really encouraged by that. It came late for the film that should have been nominated a number of years ago, Christopher Nolan’s, The Dark Knight,” says Spielberg about Oscar’s expansion to up to ten Best Pictures nominees, “That movie would have definitely garnered a Best Picture Nomination today, so having these two blockbusters solidly presented on the top 10 list is something we should all be celebrating.”

‘Indiana Jones and the Dial of Destiny’ opens on June 30, courtesy Disney.

Turning to the future, Spielberg is still mulling over the next movie he’ll direct; the untitled Frank Bullitt project starring Bradley Cooper being one option.

“Everything is a process, and I don’t have a next film,” he tells Deadline.

In regards to the future of the Indiana Jones franchise, which includes an early in the works Disney+/Lucasfilm series, Spielberg says he was “peripherally involved” with the next movie. Indiana Jones and the Dial of Destiny.

“I advocated the fifth movie in favor of hiring James Mangold,” Spielberg says, “I’m going to let him make most of those decisions.”

A correction was made to the above article