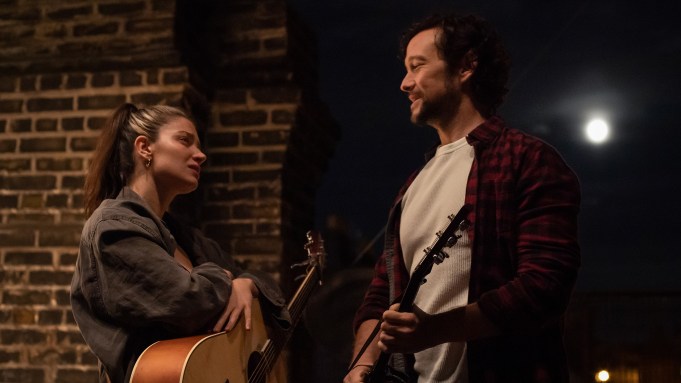 Working at the opposite end of the spectrum to Baz Luhrmann, Ireland’s John Carney seems content to make low-key, localized musicals that are almost custom-sized for Sundance. True, some fingers were burned when, perhaps emboldened by the slow-burn success of 2007’s Once, he hired a big star (Keira Knightley), filmed in New York, and endured the full horror of a hands-on Harvey Weinstein release for the bigger-budgeted follow-up, Begin Again, in 2013. After whatever went down on that film, however, he returned to Ireland with a bunch of largely unknown actors for his next and arguably best so far: Sing Street (2016), an underrated romantic comedy about a young man (Ferdia Walsh-Peelo) trying to find his identity through his love of music.

The good news about Flora and Son is that it is firmly in the tradition of Sing Street, with edgier humor — unusually dark jokes of the kind that pepper the films of John Michael McDonagh — and a slightly more serious subplot than we’ve seen before, involving Dublin’s underprivileged underclass. The not-so-good news is the film doesn’t really advance the formula much and could almost be Sing Street 2, hitting the same notes but with more disappointing songs, tapping into Carney’s by now familiar belief in the redemptive properties of music (indeed, Begin Again originally debuted at TIFF with the title Can a Song Save Your Life? — and if anyone thinks one can, Carney does).

Whatever the film’s structural weakness, they are swept under the carpet by a tour-de-force breakout performance by Eve Hewson as Flora, a single mother who babysits for a rich woman by day, enjoys a steady stream of boozy flings by night, and shares her tiny flat with her surly, owl-faced teenage son Max (Orén Kinlan). “I’m living in a shambles with a kid who hates me,” she complains, but Flora gives as good as she gets in their frequent battles. One day, after forgetting Max’s birthday, Flora finds an acoustic guitar in a skip, dusts it off and presents it to him. Surprisingly, or perhaps not, Max, being a product of the bling-encrusted gangsta age, refuses to have anything to do with it.

It soon transpires that Flora, not Max, is going to be the film’s pet project, and after a little bit of amateur research on the web she finds herself an online guitar teacher. Jack, played by Joseph Gordon-Levitt in a well-deserved switch up from juvenile leads, lives in California and charges $20 an hour for lessons. He’s slick, and his sunlit work room is full of the somewhat bland trappings of the professional muso, but underneath the cheery exterior is a reformed addict whose creative dreams have died. Which may be why he responds to the foul-mouthed Flora, who slugs white wine from a glass placed where his Zoom camera can’t see it and spices up his tender love songs with references to screwing.

The inference is that Flora will fall for Jack and finally move on from her ex-husband Ian (the great Jack Reynor), himself a washed-up bass player who still lives on past glories such as the time his band opened for Snow Patrol. But there’s also the issue of Flora’s relationship with Max to contend with. A serial thief facing time in youth custody, Max shows his own signs of a musical awakening when Flora discovers his secret sideline as a rapper and beatmaker who styles himself as “Dublin 07”. To help him impress a local girl, Flora decides to foster Max’s talent, and the two join forces (hence the film’s name).

There are relatively few characters, which is probably just as well, since Hewson dominates the screen with a bolshie and highly physical performance that tears through the story like a whirlwind. The daughter of U2 singer Bono and therefore a) no stranger to music and b) unlikely to have been brought up on the breadline, Hewson is especially terrific, simply disappearing into this blousy, always inappropriate, chardonnay-soaked naïf.

It’s a shame, then, that having brought together such potentially rich characters, Carney’s self-penned script never quite figures out where to go with them, and while the feel-good ending no doubt rocked the house at Sundance, it cashes in a lot of early goodwill that the story hasn’t really earned. As a modest comedy, however, it has charm and appeal, but just not enough substance to blow up at the box office.