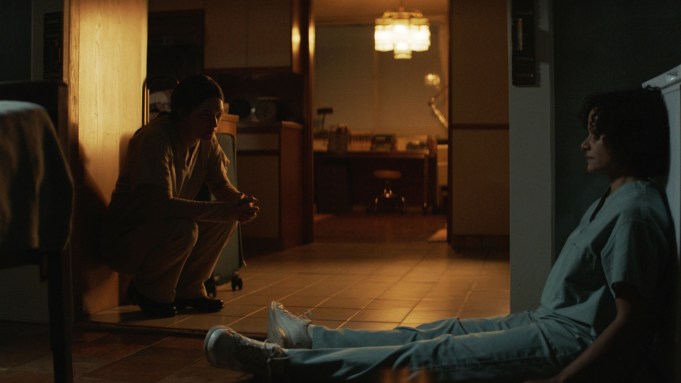 Following in the slipstream of Shudder’s surprise hit Skinamarink, Laura Moss’ birth/rebirth is a similarly non-conforming horror, this time one that prioritizes its intriguing but somewhat underdeveloped conceit above the traditional trappings of its genre. Very loosely inspired by Mary Shelley’s 19th century novel Frankenstein, the film centers on a decidedly post-modern Prometheus: by making its central scientist female rather than male, Moss’ feature debut short-circuits the usual blunt clichés of a crazy scientist bent on defying nature and instead enters the realm of David Cronenberg’s ’80s heyday with its focus on the human anatomy as a battleground for shady ethics.

Of all Cronenberg’s body horrors, however, the touchstone here seems to be 1988’s Dead Ringers, one of the director’s most sophisticated and least gory, dealing with notions of duality in the story of doomed identical twin gynecologists. Moss touches on similar ideas of yin and yang here, starting with the character of Rose (Marin Ireland), a withdrawn, socially awkward pathologist whose bizarre private life suggests she is Up To No Good, jerking off random strangers in public restrooms and saving the sperm for some obviously nefarious purpose. Celie (Judy Reyes), meanwhile, is a sunny and popular maternity nurse who is devoted to her 6-year-old daughter Lila.

Their paths seem unlikely to connect, living, respectively, in the gloomy netherworld and bright above-ground of the same hospital, but meet they do after Lila becomes sick with a meningitis-like illness. Before Celie can make it to ER, Lila is pronounced dead, but her mother’s intuition is aroused: the precise details are sketchy, and Lila’s body is missing. Tailing Rose, Celie makes a shocking discovery — Lila is not dead at all but alive and comatose in Rose’s apartment, where she is being kept alive by a serum based on miscarried human fetuses (which explains what Rose has been doing all this time).

This may seem like a major spoiler, but birth/rebirth is only just getting going, and the film’s success depends on your willingness to suspend disbelief as to what happens next. Eschewing the usual gothic bombast of medical horrors, Moss’ film becomes a kind of perverse buddy movie instead, as Celie effectively moves in with Rose to enable her. While Rose works on her serum, revealing the roots of her obsession with regeneration after cutting off a starfish’s leg as a child, Celie plays housemaid, keeping Rose’s fridge stocked and swiping medical supplies on an industrial scale. But when Rose’s medical status changes, and she is no longer able to produce compatible fetuses, the two women are forced to look for a new match, settling on a heavily pregnant, not to mention overly trusting, local woman who falls unwittingly into their clutches.

The film’s absolute defiance of genre tropes is admirable but sometimes self-defeating, and the sudden lurch into Odd Couple territory is yours to take or leave. Similarly, any lurking fears that it’s about to become a Monkey’s Paw-style warning about the ethics of messing with God’s plan — ominous shots of Lila’s pouty face and scenes suggesting that her behavior is becoming dangerously erratic — quickly evaporate. In this sense, the final stretch is the most satisfying of the film’s distinct three acts, as Celie drops the co-conspirator act and becomes an active participant in Rose’s crazy scheme. Likewise, it’s here that some of the film’s more original ideas come to fore, about nature, nurture and science, not to mention the terrifying vulnerability of expectant parents.

The Sundance festival’s Midnight strand is a broad church, and in many ways the film’s ungainliness is part of its appeal, in the sense that one can infer its ongoing resistance to convenient genre tropes and feel reassured that a Twilight Zone twist isn’t waiting round the corner. The two leads, likewise, counter typical casting, adding a level of realism that helps keep things on track whenever the plotting gets silly. At these times, though, there is the sense that birth/rebirth might simply be a slightly smarter TV movie from hell, and if only one lesson can be learned here, it’s that campy lines like “Don’t you walk away from me, you mad scientist princess bitch,” while great, are not always helpful when trying to establish the tone of an intelligent female-fronted horror.