Benjamin Cleary said his upcoming film Swan Song originated from his experience of losing three friends and his own existential questions about grief.

“When something like that happens, you see the grief emanate out and affect everyone else around you,” Cleary said Sunday during Deadline’s Contenders Film: Los Angeles panel at the DGA Theater. “In a way I just started thinking about, ‘What if someone else close to me passes away? What if I were to pass away? What would happen to my family?’”

Swan Song is Stutterer Oscar winner Cleary’s feature directorial debut and follows Ali as a man diagnosed with a terminal illness who is presented with an alternative solution by his doctor (Glenn Close) to shield his family from grief.

Ali reflected on the opportunity to take on his first feature lead and doing so while playing double duty, as he takes on both the dying man and his replica who might replace him upon his death. 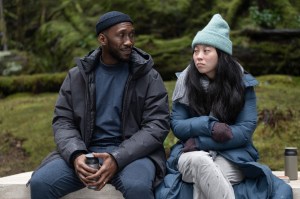 From physicality, body language and emotional state, Ali said he felt that he had to double the kind of work and effort he typically puts into a role.

“It was more complicated than I imagined, but it was just a beautiful collaborative experience to be there for each other,” he added.

During the conversation, the two also spoke about working amid the Covid pandemic and the aesthetic quality to the pic from Apple Original Films with A24.