UPDATE,Writethru: Christopher Nolan’s Tenet handily passed $200M overseas this weekend with a $25M offshore frame to bring the international box office cume to $214M. Including domestic, the global to-date total is now $250.1M. Boosting play overseas, as we noted yesterday, was the Japan bow which came in at a strong $4.3M in the No. 1 position and ahead of both Dunkirk and Interstellar (the latter recently playing strongly in local re-release) across a three-day debut. This comes as Japan’s Silver Week holiday begins.

During a three-day Japan launch (rather than the typical Saturday/Sunday), IMAX Tenet screens accounted for a 27% market share. The $1.15M generated from only 38 IMAX screens is the biggest ever bow for Warner Bros and Christopher Nolan in the format in the market. Overall overseas, Tenet grossed $3.5M from 782 IMAX screens for an international cume of $23.4M, 11% of the international total.

Mexico, with 88% of cinemas now re-opened, was a clear number one for Tenet with $850K. This is the first Latin American market to debut the film. 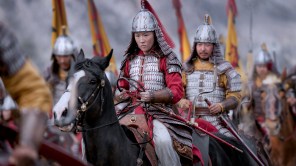 Meanwhile, Disney’s Mulan saw a 72% drop in its sophomore China frame, adding $6.5M to bring the local cume to $36.2M. The live-action update on the 1998 animated classic was No. 2 for the weekend there, where it has been battling piracy, a low reviews score and poor word of mouth. It came in behind local juggernaut The Eight Hundred which is now at about $424M, soon to overtake Sony’s Bad Boys For Life ($430.3M) as the No. 1 movie worldwide of this unprecedented year.

China will up its cinema capacity level to 75% next weekend as Leap (Duo Guan), about the Chinese women’s volleyball team, will start previews ahead of National Day celebrations which will see a host of local titles enter the mix. We are likely to be looking at more and more success stories out of the Middle Kingdom in the coming weeks.

Turning back to Mulan, which debuted on Disney+ September 4th in markets where the streaming service is available, it has grossed an estimated $57M through Sunday in its international box office theatrical plays.

The full weekend from 20 markets added $10.9M. New hubs included Korea where Mulan did $1.2M from Thursday through Sunday. It is in a neck-and-neck race with Warner Bros’ Tenet for No. 1 across the weekend. The Chuseok holiday is coming up in Korea on September 30, which could give Mulan a boost, though the market has been hobbled. Hong Kong also opened, but given the backlash against the film last year when star Liu Yifei prompted the #BoycottMulan furor over controversial statements she made on social media, we hear the bow was slight.

Elsewhere, the Niki Caro-directed pic retained No. 1s in the Middle East, Malaysia and Singapore. There were good holds in Poland (-21%), Middle East (-39%) and Russia (-42%). Despite the difficulties in China, it remains the top market on the film, followed by the collective Middle East ($5.1M), Russia ($3.5M), Thailand ($2.7M) and Taiwan ($2.2M). Israel, where a new lockdown has been implemented, is due to open next weekend, though that may change.

Outside the studios, Voltage Pictures’ After We Collided continued its sexy run offshore — well ahead of the October 23 domestic bow — with an added $4.1M from 31 markets. This brings the overseas cume to $30M. Russia was a highlight on the sequel with a No. 1 start, above several comps. Also notable, the UK, where the first movie in the Anna Todd series was not released theatrically, did an estimated $827K this session. The film had begun two weeks ago on a very limited number of screens there, then expanded to over 300 this frame and is now headed to open even wider next weekend to 500+.

‘Everything Everywhere All At Once’: SXSW Sets Daniel Kwan and Daniel Scheinert’s A24 Pic As Opening Night Film