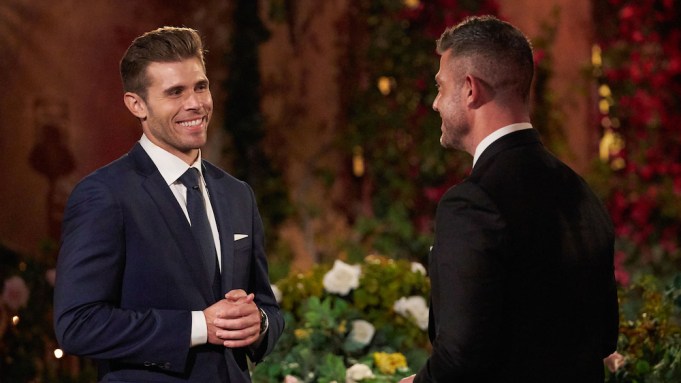 SPOILER ALERT! This post contains details for the Season 27 premiere of ABC’s The Bachelor.

Zach Shallcross began his journey to find love during Monday’s premiere of Season 27 of ABC’s The Bachelor. The 26-year-old, who originally appeared on Rachel Recchia and Gabby Windey’s Season 19 of The Bachelorette, was introduced to 30 women who will be vying for his heart throughout the next several weeks.

The episode kicked off as it always does, giving viewers a more in depth introduction to Shallcross (Did you know he used to be a DJ?), who admitted that he was flying by the seat of his pants a little bit when it came to leading this season.

“I don’t know how to do this. I have zero idea. I need all the help in the world,” Shallcross said, before seeking advice from former Bachelor Sean Lowe — who has one of the only successful love stories from the series, having been married to his wife Catherine, who was his finalist on Season 17 of The Bachelor, for a decade.

Lowe said he went into his experience “realistically,” and he didn’t expect to hit it off with Catherine when he first met her. It wasn’t until halfway through the season that he was sure she was the one. He told Shallcross: “You might be surprised, too.”

Then, it was time for Shallcross to prepare for his own suitors. Cue a shirtless exercise montage.

You might remember that Shallcross was introduced to five contestants already during The Bachelorette: After the Final Rose — Bailey, Brianna, Brooklyn, Cat, and Christina. Viewers voted, and 24-year-old Brianna received America’s First Impression Rose, meaning she’s going into night one completely safe from elimination. The other four women will have to take another shot at getting a rose after the first cocktail party along with all the other contestants.

Before the arrivals at the mansion, the episode featured some packages from a few of Shallcross’ other suitors. There’s Katherine, the 26-year-old registered nurse from Tampa, FL; Charity, the 26-year-old therapist from Columbus, GA; Greer, the 24-year-old medical sales rep from Houston, TX; and Kaity, the 27-year-old ER nurse from Austin, TX (which is where Shallcross also currently lives).

Finally, it’s time for Shallcross to welcome the women to the Bachelor mansion. Many of the women kept their greetings simple, expressing their nerves and sharing a heartfelt first moment with Shallcross. Others took a more memorable approach, like 25-year-old Davia, who popped some champagne and toasted with Shallcross “to the start of something new.” Gabi, 25, brought Shallcross some maple syrup from her home state of Vermont (the gesture fell a little flat when the taste of the syrup made him grimace). Bailey brought a name tag, since he couldn’t remember her name during After the Final Rose, prompting Zach to apologize for the slip up and even give her the first kiss of the evening.

Perhaps the most memorable of the night was 23-year-old Vanessa, who brought a trumpet player and strutted up the driveway tossing some mardi gras beads to represent her home state of Louisiana. Or it might be Mercedes, 24, who brought her pet pig Henry to the mansion. Without a doubt, Henry stole Shallcross’ heart.

“All the women impressed me so much,” Shallcross told Palmer after greeting everyone, adding that he “might have” met his future wife. As he toasted the women inside, he expressed how much he values honesty in any relationship, asking all of them to be “open and honest” with their feelings throughout the process (which obviously sets off alarm bells that there may be some issues with honesty that arise later in the season).

Right off the bat, Shallcross seemed to have a connection with Kaity, and the pair even shared a kiss during their one-on-one conversation at the cocktail party. His next kiss was with Christina after the two of them played a compatibility game, but their moment was quickly crashed by a group of other women. He also changed a baby doll’s diaper with Genevie, who said that Shallcross gave her “husband vibes.”

And, of course, the night didn’t end without some tears. Madison found herself overwhelmed after her second interaction with Shallcross. When the pair kissed, they both separately told the cameras that they hadn’t felt the spark they were expecting, prompting Madison to storm out of the mansion. That’s when some of the energy began to shift as women who hadn’t had a chance to talk to Shallcross began to wonder if they’d get that opportunity before the night was over.

After a few more conversations, it was time for Shallcross to give out his first impression rose. That went to Greer, who he said that their conversation was “one of the easiest” he’d ever had.

And just like that…it’s time for the first rose ceremony. But before he could get started, Madison asked Shallcross for some clarity on where things stood between them. He told her he didn’t feel a connection, and she left without going through the rose ceremony. Since she left before the rose ceremony, that means that nine other women would be eliminated on night one.