Oscar-winning composer Michael Giacchino (Spider-Man: No Way Home, Jojo Rabbit) today unveiled a main theme for Matt Reeves’ The Batman, which is set for release in the U.S. on March 4.

The upcoming superhero film picks up with the Caped Crusader (played by Robert Pattinson) in his second year of fighting crime, watching as he uncovers corruption in Gotham City that connects to his own family while facing a serial killer known as the Riddler (Paul Dano). Zoë Kravitz is playing the role of Catwoman, with Colin Farrell transforming himself into the Penguin. Barry Keoghan, Peter Sarsgaard, Amber Sienna, Andy Serkis, Jeffrey Wright and John Turturro round out the cast. 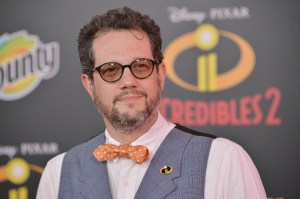 Reeves wrote the pic with Peter Craig and produced it with Dylan Clark, with Simon Emmanuel, Walter Hamada, Michael E. Uslan and Chantal Nong Vo serving as its exec producers, and Toby Hefferman as associate producer. Deadline confirmed today that it will be the longest Dark Knight film of all time, at a runtime of two hours and 55 minutes. WaterTower Music is handling its soundtrack release.

Giacchino is no stranger to superheroes, having previously scored Doctor Strange, along with multiple Incredibles and Spider-Man films, including Sony’s recent box office smash, Spider-Man: No Way Home. Other upcoming films from the composer include Thor: Love and Thunder and Jurassic World: Dominion.

Giacchino earned his first Oscar more than a decade ago for his work on Pixar’s Up, after earning his first nom for 2008’s Ratatouille. He’s also scored such films as Jojo Rabbit, Bad Times at the El Royale, Coco, War for the Planet of the Apes, The Book of Henry and Rogue One: A Star Wars Story, among many others, earning additional accolades including an Emmy, a Golden Globe, three Grammys, six Annie Awards and four BMI Awards.

Check out Giacchino’s theme for The Batman by clicking above. Twitter posts in which Giacchino and Reeves tout it can be found below.

Well, hey! What do you know?

My brilliant friend @m_giacchino wrote this theme before I ever shot a frame of @TheBatman. I can still remember listening to it in my car with #DylanClark before we went onto the stage to do #RobertPattinson's screen test. We both had chills. Listen now: https://t.co/1t4ExcwfZd pic.twitter.com/hACMoP9bT0