With the recent Broadway cancellations and Omicron knocking New York City for a holiday loop, it’s easy to forget that Broadway’s fall season was, artistically speaking, stellar, with a slate of excellent new shows opening, some fine holdovers from pre-shutdown days returning and significant strides made in the representation of Black theater artists.

So as a reminder of better times, and with hope for a post-Omicron return to full vigor, here’s my list of the 10 Best New Broadway Shows of 2021.

The Lehman Trilogy Sam Mendes’ production of the Stefano Masinni play, adapted by Ben Power, is an astonishing amalgam of history and stage magic, chronicling the true and unlikely tale of how a trio of immigrant brothers became a founding force in the American economy and an integral part of our national story. The entire cast – Simon Russell Beale, Adrian Lester and Adam Godley – was superb, but the scene that haunts me most comes when Godley, as Bobby Lehman in the 1960s, dances the Twist – and seems to shrink into decrepitude as he does. 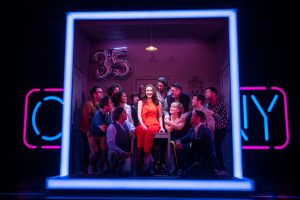 Company Stephen Sondheim’s death on Nov. 26 was an incalculable loss to the theater, an event honored by the gorgeous production of one of his masterworks, Company. Beautifully designed, lovingly performed and cleverly re-gendered by director Marianne Elliott, the revival was packed with fine renditions of some of Sondheim’s greatest songs, with standouts including “Getting Married Today,” performed by Matt Doyle, the Katrina Lenk-Claybourne Elder duet on “Barcelona,” and the inevitable showstopper “The Ladies Who Lunch” by the one-of-a-kind Patti LuPone.

Caroline, Or Change This revival of the Tony Kushner-Jeanine Tesori musical, directed by Michael Longhurst, seems even more potent today than it did in its excellent 2004 original Broadway staging. As the Black maid to a Southern white family just as the Civil Rights movement of the 1960s begins to change the rules, Sharon D Clarke gives a performance for the ages, best demonstrated in the remarkable Act II cri de coeur “Lot’s Wife.”

The Lyceum Plays In one of the fall season’s biggest gambits, producers of the (previously) Off Broadway plays Dana H. and Is This A Room decided to stage the two unconventional, intermissionless plays on successive nights at Broadway’s Lyceum Theatre. Both plays closed earlier than they should have, but together set an early bar of artistic excellence for Broadway’s 2021-2022 season. Lucas Hnath’s Dana H., in which actress Deirdre O’Connell lip-synced to recorded interviews of Hnath’s mother Dana Higginbotham as she recounted a harrowing tale of kidnapping and abuse, was a tour de force, virtually impossible to adequately describe to anyone who missed the privilege of witnessing it. Equally mesmerizing was Is This A Room, conceived and directed by Tina Satter and starring Emily Davis as whistleblower Reality Winner. Davis, along with co-stars Pete Simpson, Will Cobbs and Becca Blackwell, performed, verbatim, the FBI interrogation of Winner, a re-creation that proved no less nerve-wracking for knowing the outcome. 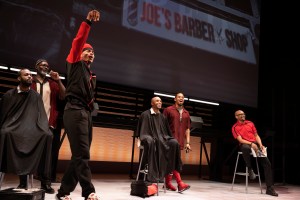 Thoughts Of A Colored Man Playwright Keenan Scott II’s extraordinary play, directed by Steve H. Broadnax III, combined spoken word, slam poetry, narrative vignettes, comedy and drama to paint a vivid group portrait of seven Black men living in a gentrifying Brooklyn neighborhood. Filled with beauty, hardship, dignity and camaraderie, Thoughts Of A Colored Man repeatedly topped itself with one character-defining scene after another, culminating in a soliloquy delivered by actor Tristan Mack Wilds that lamented the failed dreams of a once-promising athlete: “Man, I used’ta be nice.”

Trouble In Mind It took 64 years – and director Charles Randolph-Wright – to bring the late Alice Childress’ fierce backstage comedy-drama to Broadway, and somehow this play from the 1950s proved among the most relevant of the current Broadway season. LaChanze stars as Wiletta, a successful actress cast in a Broadway play that espouses liberal values while trading in Black stereotypes and white savior tropes. Trouble in Mind‘s ensemble cast was first-rate, with LaChanze leading the way. Best scene: Wiletta demonstrating the characteristics of one Black stock character after another in rapid succession. 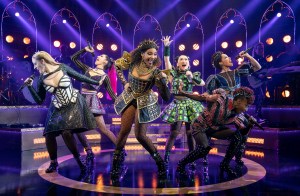 Six The Toby Marlow-Lucy Moss musical that puts a contemporary pop song spin on the wives of Henry VIII was set to open just as the March 2020 pandemic shutdown struck, and its delayed opening this fall felt like a triumph in more ways than one. Smart, fun, irreverent and joyful, Six boasts one catchy musical number after another. My favorite: Brittney Mack’s irrepressible Anne of Cleves getting a last laugh on her husband (and history) in the song “Get Down.”

Lackawanna Blues Written, directed and performed by Ruben Santiago-Hudson, Lackawanna Blues conjured some two dozen characters from the playwright’s youth, denizens of two boardinghouses owned and operated by Miss Rachel, the indomitable woman who raised young Ruben and functioned as a sort of guardian angel for the hardscrabble residents under her roofs. Santiago-Hudson portrayed them all in a rousing performance.

Clyde’s Lynn Nottage’s play, directed by Kate Whoriskey, is set entirely in the kitchen of a last-chance diner, and blends working-stiff naturalism with brief flights of dreamers’ magic realism. Uzo Aduba plays Clyde, the sadistic taskmaster who makes life hell for the workers trapped in her purgatory of a sandwich shop. With a take-no-prisoners comic ferocity, she barks to one of her put-upon workers, “Don’t disappoint me by having aspirations.” 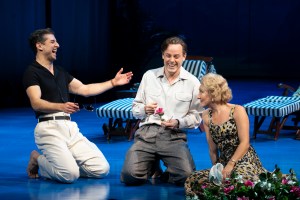 Flying Over Sunset Without doubt the most underrated new production of the Broadway season thus far, this musical about a fictional meeting of the very real LSD-takers Aldous Huxley, Cary Grant and Clare Boothe Luce boasts more than its fair share of stand-out musical numbers. With a book and direction by James Lapine, music by Tom Kitt and lyrics by Michael Korie, the visually gorgeous production stars Carmen Cusack, Harry Hadden-Paton and Tony Yazbeck as the famous day-trippers. While the book doesn’t know quite where to take them, Flying Over Sunset has a fine time along the way. Best number: “Funny Money,” in which Yazbeck’s Grant performs a vaudevillian tap dance with his childhood self, played by young Atticus Ware in a Broadway debut that stands among the most charming of the year.