“Over the years I’ve developed my own genre of films, and they typically involve a man alone in a room wearing a mask, and the mask is his occupation,” said The Card Counter filmmaker Paul Schrader, whose distinctive oeuvre includes classics of American cinema featuring internally tormented central figures in Taxi Driver, Raging Bull, American Gigolo, Light Sleeper and First Reformed, the latter of which earned Schrader his first Oscar nomination.

“I take that character and run him alongside a larger problem, personal or social,” Schrader explained, detailing how nomadic gambler William Tell, the titular character of The Card Counter played by Oscar Isaac, fits the filmmaker’s mold. In this case, Tell’s serving a self-imposed penance driven by an overwhelming guilt.

“What if someone had done something that he cannot forgive himself for?” asks Schrader. “While society may have forgiven him, he hasn’t forgiven himself. He did a terrible thing, and now he’s living in a kind of purgatory. How does he work through it?” The film’s story gradually reveals Tell’s former military history and the backstory that continues to haunt him as he drifts aimlessly across the country.

“He’s a nexus between the World Series of Poker and Abu Ghraib,” Schrader said. “I asked myself what he could have done in his life that was so egregious that he simply could not get past his crimes. Even serial killers can forgive themselves, but what if he had done something that stigmatized his own country?”

“I had to come up with a profession for someone who is waiting, and who is living a sort of non-existence. Gambling felt like the perfect milieu,” Schrader revealed. “He exists in this limbo, traveling from casino to casino, playing cards, waiting for something to happen.”

Tell’s perpetually pointless journey is interrupted when he becomes entangled with two fellow loners (Tye Sheridan and Tiffany Haddish) who unexpectedly engage him with the world again, setting him on a new course that could lead to either redemption or ruin.

“My aim is to create a crack in the viewer’s skull, opening up a rift between what they desire and expect of my characters and what they feel after spending time with them,” Schrader said. “How they make that adjustment is up to them, but to get the viewer engaged in this kind of conflict is what every artist seeks. It’s not so important what my viewers think, but that they do think.”

Click below to read the script for The Card Counter, which hit theaters in September via Focus Features after its world premiere at the Venice Film Festival. 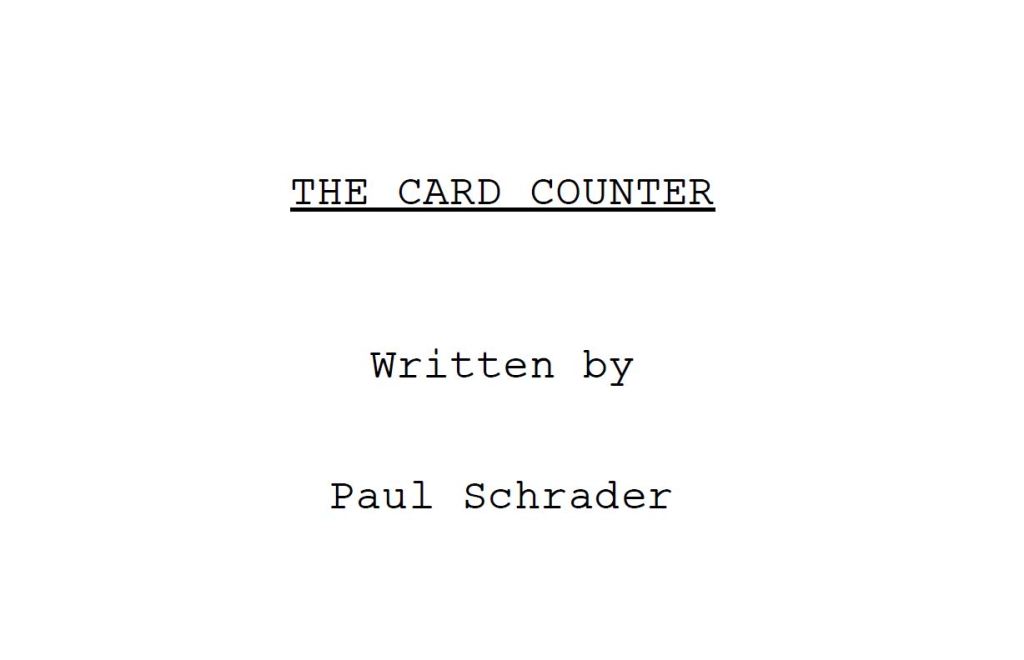