“Exposed” – McCall’s determination to apprehend Mason Quinn, the criminal responsible for Bishop’s death, veers into a dangerous obsession that could cost her everything. Also, Delilah finally meets her mother’s vigilante team when she requires Mel and Harry’s help to prove a fellow classmate has made her best friend a victim of revenge porn, on the second season finale of the CBS Original series THE EQUALIZER, Sunday, May 15 (8:00-9:00 PM, ET/PT) on the CBS Television Network, and available to stream live and on demand on Paramount+.
Pictured: Queen Latifah as Robyn McCall. Photo: Michael Greenberg/CBS ©2022 CBS Broadcasting, Inc. All Rights Reserved.
CBS 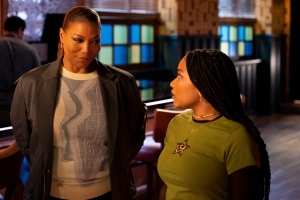 Delilah, who is once again paranoid about her mother’s safety, finally met Robyn’s super-secret colleagues Melody (Liza Lapira) and Harry (Adam Goldberg). Who better to help with a tech issue than Harry?

But things got intense for Robyn’s teen daughter as her friend Vera (Cristina Angelica) attempts suicide to escape the pain but Delilah arrives just in the nick of time. Not only is Vera safe, but Harry managed to wipe any trace of her photos off the internet. Oh, and Vera’s slippery ex who leaked the photos was arrested while his classmates who witnessed it snapped plenty of photos and video for the ‘gram. 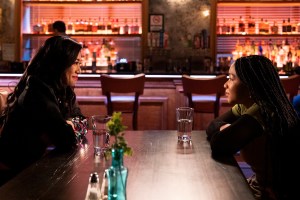 It was a victory for everyone involved so of course, tragedy couldn’t be too far behind. As Delilah, Robyn, and Aunt Vi (Lorraine Toussant) are driving home from school celebrating, an SUV driving at high speed crashes into their car. The accident happened just as Robyn was telling the pair she was involved in a very dangerous case.

As Delilah’s biggest fear plays out, two men grab Robyn from the wreckage and put a hood over her head before throwing her into the SUV.

Robyn got too close to Quinn who is working on a dirty bomb and the stakes are too high.

Bishop’s murder will go unsolved for now while the fate of the world remains in the balance until next season.