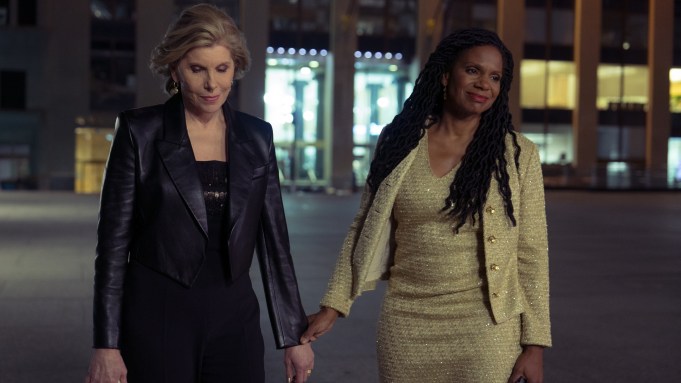 The date was September 22, 2009 when viewers were first introduced to the character of Diane Lockhart in the CBS series The Good Wife, portrayed by Christine Baranski. Now, 13 years later, Diane walks off into the sunset one last time—at least for now—as the show’s streaming spinoff The Good Fight says goodbye after 6 seasons on Paramount+.

Everyone on the series was really put through the ringer this season, much like most of the world the last two and a half years. Diane, Liz Reddick (Audra McDonald), Marissa Gold (Sarah Steele), Jay DiPersia (Nyambi Nyambi), and Carmen Moyo (Charmaine Bingwa), among others, spent a lot of time in their law office where they were safe from the violence just outside their building where civil war loomed.

From her desk, Diane imagined a future far away from court, Donald Trump, and the NRA, specifically in a breathtaking villa in France. But could she walk away from the life and career she built, as well as all the people she’s helped following in the footsteps of her heroes like Ruth Bader Ginsberg? There were certainly clients who made that decision difficult like Felix Staples (John Cameron Mitchell)— who hilariously wanted to bring down Ron DeSantis by alleging that the Florida Governor had sexually assaulted him. I mean, where did that stain on the red “Florida is for Lovers” t-shirt come from anyway?

And could she walk away from her husband Kurt McVeigh (Gary Cole)? She abruptly dumped him citing their political differences, but is this really it? Yes, she’d been indulging in a flirtation with her handsome Buddhist doctor Lyle Bettencourt (John Slattery) but she certainly wasn’t sure things were really done with Kurt. Little did she know that her two favorite guys found one another and she would be forced to choose —fate is funny that way.

Kurt saw Diane appear on some news footage showing the melee outside her office building that convinced him to quit the NRA to be with his beloved. At reception, he learns the elevator is broken and while seated at a nearby bench figuring out what to do, the silver fox Lyle arrives and reveals he too is there to see Diane. Both make their way to the stairs for an old fashion climb up many flights of stairs as if they were going to save Rapunzel. But this princess didn’t need saving after all, but she did indeed pick her prince—Kurt, obviously. If only the United States could learn to put politics aside and learn to just love one another like these two.

Diane and Kurt make a great team but her bond with Liz is something of pure magic. They’re two strong and capable women determined to leave the world better than they found it. With all of her father’s achievements, I dare say Liz has never really been in his shadow. She is her own woman and a beacon for the Black community in her own right. If the show had continued, seeing her work alongside Carmen would have been a treat. They brought to the table different approaches to their work like two sides of the same coin—oh, and so fearless.

More of Carmen and Jay DiPersia (Nyambi Nyambi) would’ve been brilliant too. But alas, Jay will continue his work with Renetta Clark (Phylicia Rashad) and Randy Elkin (Daniel Breaker), which honestly is the spin-off ripe for the picking. With Carmen opting not to join Jay’s endeavors, she should always team up with Marissa, the duo poised to be the next Liz and Diane, maybe even greater.

After all is said and done, Liz gives Diane a pep talk that convinces Liz to take the job in D.C. running a law firm recently acquired by STR Laurie—fighting the good fight.

Everyone’s story ties up neatly by the time viewers see Trump’ silly dance moves as the final beats of the episode tease he plans to run again for President with the Village People start singing YMCA in the background. Yes, that’s really how the series ends.

Robert and Michelle King spoke to Deadline about saying goodbye, why the show ends with Trump and the Village People, and possible spin-off series.

DEADLINE: Saying goodbye after 13 years can’t be easy. What has that been like?

ROBERT KING: You know what, I directed the last episode and it was hard. It was hard because every two or three days someone would wrap shooting. Like, Gary Cole was near the beginning of the schedule and I was like, “Oh my God, this is very real,” especially when you have actors who were there from the very beginning. But we recently had the finale screening and I got to see everyone and it was so nice; now I don’t feel sad anymore. It was really good to see so many of them. I have a feeling we’ll work with them again. I don’t know why, but I have a feeling we’ll see them again.

MICHELLE KING: We had slightly different emotional reactions to it. I was just grateful we were able to end the story in a way I actually feel good about. I hope people enjoy it. I will definitely miss these characters. I will miss the ability to process the news with the writers because they are so very smart. But the people we worked with, I anticipate being able to stay in touch with them. So my hope is that I won’t have to miss them because they’ll remain in my life.

DEADLINE: What’s it been like going on this journey with Diane for 13 years?

MK: What’s been nice about the exploration of Diane Lockhart is when we met her, it was through the eyes of Alicia Florrick [Julianna Margulies] when she was a far more intimidating presence. And then over these 13 years, we’ve gotten much more inside of her. And while she’s never lost her strength, we’ve gotten to see her vulnerability. We see her try to cope with difficult times that she never anticipated.

RK: I think also this year what made an added poignancy to it is we know a lot of powerful women or women in business and they have been very thrown by how little power they have in the field that matters to them the most. Like in regards to abortion and female rights. I think the end for us was Diane tapping into who those women, who they are, and what they’re struggling with right now.

DEADLINE: The Diane and Kurt relationship this season felt like it was all about bipartisan love. What say you?

RK: You know that we went around the room almost every week,” Okay, what are we thinking?” And that dial kept moving. There’s no way they could be together given the current environment, right? Then it would come around, “But I wish they could because I like Gary Cole.” [Laughs] I think it was always this feeling that it would be really shitty not to leave the audience with that, even though it’s a controversial decision. Kurt, even though he’s not in the NRA, or at least running it, he is the Republican preacher that he always was and a very conservative one.

MK: I am glad that they are looking to make their marriage work.

DEADLINE: The world really needs to know what Felix put on that stained shirt.

RK: My guess, because Felix is based on Milo Yiannopoulos, is that it’s his own… I don’t think it’s ice cream which was guessed. I don’t know what the prop people did but they kept sending us pictures of placement because we wanted it to seem like it was coming off the end of Florida. It’s not one the highlights of our experiences on the show, but very appropriate for the last episode. Find out where the sperm should land on this t-shirt, Florida for lovers.

DEADLINE: What can you share regarding Jay’s future? You really left us wanting more. Do you see a spin-off potential here?

MK: Jay’s story is an example of the aspirational part of the show. The thought that there is this group that is so competent and is is finding justice behind the scenes.

RK: We did something in the third season about the Book Group, which was a group of women who wanted to use Trump’s methods against him. Diane became a part of it. It was a little bit like when you bring guerrilla actions you actually become the thing you hate and we wondered if that’s always the case. We talked about it in the writers room, if there was any way to have a guerrilla effort that can both succeed and be aspirational? I agree, there is a spin-off there.

DEADLINE: As an OG watcher, it was great to see some familiar faces return and others, like David Lee [Zach Grenier] get their comeuppance. Is there anyone else you wish you could’ve had back?

MK: We got the folks we were aiming to get and there wasn’t further conversations on that.

RK: We didn’t want it to be a big goodbye review where people kind of kept trouncing through the set in that way to say goodbye. You kind of want to find stories that suited them. And even then, it would have been nice to even see more of Carrie Preston because we love Elsbeth. At a certain point you just run out of time with what you can do within 10 episodes.

DEADLINE: Was it just me or was there a romantic spark between Liz and Ri’Chard?

MK: That’s interesting. I did not think of them finding a romance.

RK: You know why I thought it did, when you see her sitting on the floor of his house and there’s this kind of chemistry that feels a little romantic. But also you this sense that he tends to do that with women. But I thought there was something there. Again, we didn’t think we were going there because we didn’t want to write a check that we couldn’t cash because of the episodes we had. So it felt like this was a friendship of peers who don’t want to throw off the work relationship. Also, because of the way it was with Adrian [Delroy Lindo] since there was a romantic end to it.

DEADLINE: You ended the series with a funny video of Trump and the song YMCA. Tell me about that decision.

MK: It felt like we needed to get back to the politics that started the show and that ran throughout it. We also didn’t want to end on a sentimental beat because there’s a fair amount of sentiment earned.

RK: We always want to play the pessimism of the time but play it with a grin on our face. We wanted to end it with high spirits. When we originally ended it, Michelle said it just kind of dies off. It was with Trump announcing he would run again as it is now but then it fades to black. But then we thought we could just keep playing YMCA while Trump is doing his little “j**rking off two men dance” which is really dopey and silly. It felt like a funny and kind of crude way to end the show with this little Trump dance he does. You know, Trump can’t stand being ridiculed so we thought he would hate this video of him doing his dance. So it’s a really good and high spirited way to end the show.