The Lost Daughter writer-director Maggie Gyllenhaal joined stars Dakota Johnson and Peter Sarsgaard onstage for Deadline’s Contenders FIlm: Los Angeles to discuss the movie. Based on Elena Ferrante’s novel, it’s a psychological drama starring Olivia Colman as Leda, a middle-aged divorcée on holiday whose chance encounter with another woman, Mina (Dakota Johnson), causes her vacation to take a dark turn as she is forced to confront her past.

“I was bowled over by her work as a writer,” said Gyllenhaal about Ferrante. “She was talking about things I had never heard anybody talk about before, in particular about being a woman in the world.” Making her directorial debut with the film, Gyllenhaal was thrilled when she contacted Ferrante for the rights. “I wrote her a letter basically saying that I wanted to direct it, and she said, ‘Yes you can have the rights, but this contract is void unless you direct it.’”

Said Johnson: “I haven’t worked with an actress directing me before. Maggie knows what it feels like to be an actress — acting especially when your body is so on display. She created a profoundly safe environment so that I felt free and safe and held and supported.” 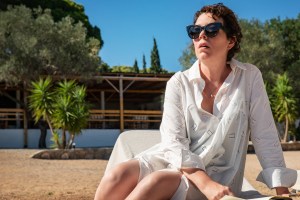 Said Peter Sarsgaard, who plays Professor Hardy: “You know, the nice thing for me about this role is I obviously have never been so adored by my director. To be adored, not just because I’m the handsome guy that I am, but to be adored because I have something to say, because of my intellect, because of my heart … that can only come from your wife.”

Gyllenhaal added: “As an actress, I know when you can create a space where there is actual love and respect, and it has to be real, then people take these wild risks onscreen. Then you’re watching people actually learn something on film, instead of watching them pretend to learn something.”

Netflix acquired worldwide rights to the film in August, ahead of its world premiere at the Venice Film Festival.