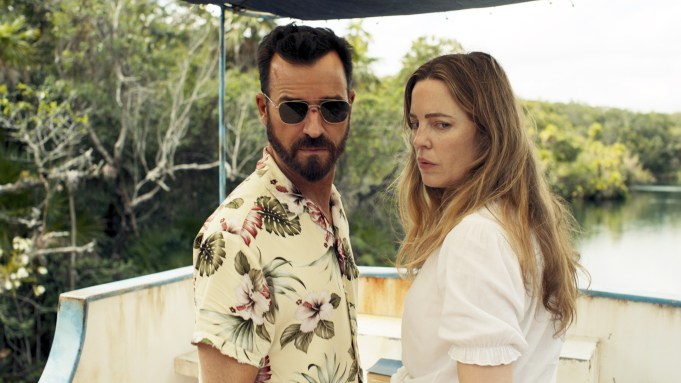 EXCLUSIVE: Allie Fox and his family won’t be returning to The Mosquito Coast as Apple TV+ has opted not to proceed with a third season of the drama series. The decision comes two weeks after Season 2 ended its run with an explosive finale.

The series is loosely based on Paul Theroux’s bestselling 1981 novel, but fans won’t get to see it move into more famous territory from the book and its movie adaptation starring Harrison Ford, Helen Mirren and River Phoenix.

TV Series Fading To Black In 2023 & Beyond: Photo Gallery Of Canceled Shows

The Mosquito Coast, which stars Justin Theroux, Melissa George, Logan Polish and Gabriel Bateman, centers on Allie Fox (Theroux), a brilliant inventor and stubborn idealist, who uproots his family on a dangerous quest to find refuge from the U.S. government, cartels, and hitmen.

The first two seasons, which are available on Apple TV+, are essentially a prequel to the book and the Peter Weir-directed movie.

They created a backstory for Justin Theroux’s Allie as a “highly intelligent enemy of the state” and fleshed out the character of Margo, played by George, who just goes by “Mother” in the book.

Author Paul Theroux told Deadline recently that if there had been a third season “it would segue into the book itself, and the movie’s search for a utopian community”.

“But we don’t know at the end of the second season if Allie is part of this, or if Margo is on her own. That’s the cliffhanger,” he added, of the explosive ending.

In Season 2, after barely escaping Mexico with their lives, the Foxes venture deep into the Guatemalan jungle to meet up with an old friend and her community of refugees. This new refuge creates trouble for the Foxes though when they become entangled in a conflict between a local drug lord and his family. At odds about whether to settle down or keep moving, Allie and Margot pursue different paths to secure their family’s future. The outcome of which will either unite the family or tear it apart forever.

Coming up on the streamer in the coming months are new seasons of Ted Lasso, Schmigadoon!, The Afterparty, and Swagger as well as new series Shrinking, Dear Edward, Hello Tomorrow!, City on Fire and The Last Thing He Told Me and limited series Extrapolations.

Nellie Andreeva contributed to this report.