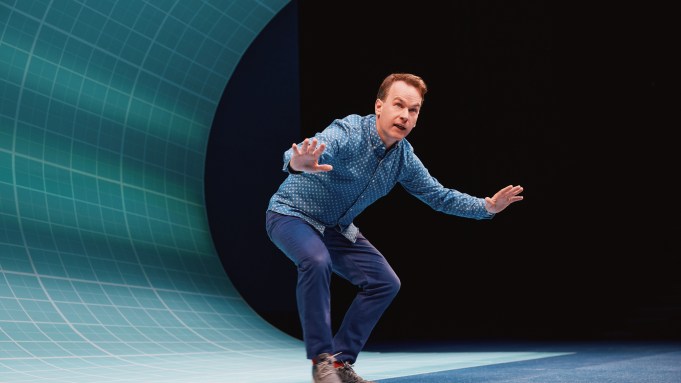 With his latest solo show The Old Man & the Pool, Mike Birbiglia cements his reigning position as Broadway’s greatest comic storyteller – stand-up comic just doesn’t quite fit him – and, yes, the competition for the title isn’t example plentiful, but if it was, Birbiglia could hold his own. He’s that good, and so is his latest accomplishment.

Directed by his frequent collaborator Seth Barrish, and performed on an attractive, deceptively simple set designed by Beowulf Boritt – a curved, wave-like backdrop displays swimming pool tiles, medical graph charts and more with Hana S. Kim’s projections – The Old Man & the Pool follows up on Birbiglia’s previous successes Sleepwalk With Me and The New One, this newest new one taking its title from Hemingway’s The Old Man & the Sea.

Opening tonight at Lincoln Center’s Vivian Beaumont Theater, the show doesn’t so much expand Birbiglia’s stylistic approach or theatrical reach or, for that matter, his chief topic of discussion – himself, his health and his family – but rather fine-tunes it into a tight, perfectly constructed 85 minutes. Anyone who has seen his other works will be delighted with this update. Anyone who hasn’t will simply be delighted.

Now in his mid-40s – he is only metaphorically “the old man” of the title; someone else makes a more literal claim – Birbiglia has endured a compendium of health crises since his youth – bladder cancer, a lifelong condition of a rare sleepwalking disorder that has him cocooned in a specially constructed sleeping bag every night lest he repeat the long-ago plunge through plate glass that left his legs permanently scarred. His father had a heart attack at 56, as did his father’s father, all of which combines to provide the comic with a very real insight into mortality, health and the fragility of life – and, most poignantly, the tenuousness of our connections to those we love.

Those insights take him, and us, on wonderfully entertaining excursions. Early in his latest show, he recalls how he’d long planned to set aside his 56th year by keeping his calendar free, and booking a yearlong AirB&B very near an emergency room. As with all great observational comics, Birbiglia can’t resist pointing out the fraud in AirB&B – no breakfast.

His latest encounter with the medical establishment begins with a routine physical, specifically with one of those blow-in-the-tube tests to measure lung power. So weak is his output that his doctor essentially throws up his hands, mutters something about heart attack, and sends the patient immediately across town to a cardiologist.

The correct diagnosis eventually comes: Type 2 diabetes. Haunted by the prospect of dying before his beloved young daughter grows up, Birbiglia – whose paunchy slouch, thinning hair, handsome if somewhat doughy face and a laconic, occasionally whisper-quiet delivery gives him an Everyman, or perhaps Everypatient, quality – determines to correct his latest health issue through diet and exercise.

Sounds simple, right? But the rigors of this particular self-care routine are, well, rigorous, especially for a man whose very job relies on constant travel and late night hours. “Healthy food goes to bed early,” Birbiglia says about life on the road. “Pizza stays up all night.”

And then there’s the exercise. Five-day-a-week cardio is the prescription, a feat Birbiglia doesn’t believe to be possible even for professional athletes.

From here, Birbiglia treats us to his early life experiences with athletics – a miserable attempt at (and hilarious recounting of) wrestling in high school, where he was so bad that he’d be paired with opponents far below his own weight level, “like watching a paperweight be pinned by paper.”

When his cardiologist recommends swimming, Birbiglia gives in, even though the near-suffocating aroma of chlorine at his local Brooklyn YMCA triggers disturbing childhood memories of naked old men – including the one that gives this title at least one of its meanings. His adult swimming abilities being so ludicrously childlike that even the Y’s swim instructor proclaims him a lost cause, Birbiglia sets out to prove everyone wrong. Despite having less of a swimmer’s body than “a drowner’s body, practically a river corpse body,” he’ll swim five days a week, he’ll beat the diabetes and he’ll live to see his daughter flourish.

That’s all you need to know for plot, or story arc. Birbiglia uses the tale to weave in any number of life observations, confessional moments and important family truths, almost all laugh-out-loud funny and more than a few lump-in-the-throat bittersweet. We get asides about an adventure with the mildew and mold that invades his Brooklyn home, the psychological terror of preparing a will and making plans for his child should anything happen to him and his wife, and the haunting lost opportunities of having been raised in a family that used “Take care” as its closest approximation of the ever-unspoken “I love you.”

Lest you think all of this sounds too heavy to support the “comic” part in “comic storyteller,” know that Birbiglia’s audience rarely stops laughing throughout the performance, even when – especially when – he calls for a moment of silence for a fellow YMCA swimmer who died in an absurdly preventable manner. Birbiglia, with a sort of faux-anger, scolds individual audience members whose giggles soon give way to howls, like children trying to contain laughter in church.

Birbiglia, casting his glare and castigations from one laughing audience member to another, essentially conducts the growing laughter into a crescendo, like a choirmaster conducts his choir, then tops it all with a punchline of his own. This is a man in full control, perhaps not of his body or his health or any of the bad stuff that life brings our way, but of how he, and perhaps his audience, can cope with it all. “Enjoy every sandwich,” he quotes the late Warren Zevon at one point, and The Old Man & the Pool is one helluva sandwich.