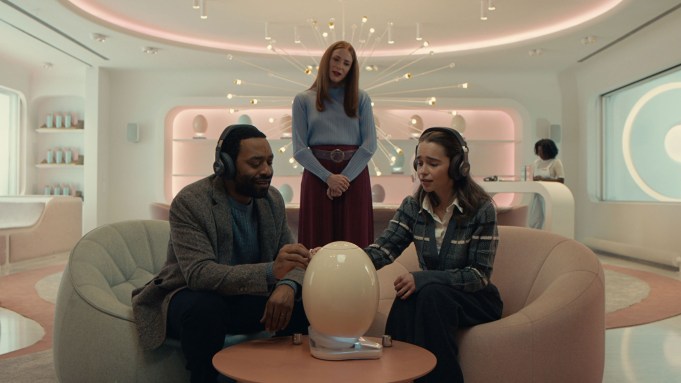 Emilia Clarke and Chiwetel Ejiofor star in The Pod Generation written and directed by Sophie Barthes, and starts with Rachel (Clarke) imagining she’s pregnant–but it was just a dream. Her smart home helps her begin the day with 3D printing toast, making coffee, and picking her outfit for the day. Her husband Alvy (Ejiofor) is a bit more grounded. He’s a botanist and professor who encourages his wife and his students to reconnect with nature. Rachel hasn’t told her husband that she’s on the waiting list for Pegazus womb clinic (a place that grows babies in pod eggs), and her consultation date is finally arriving.

In this near future society, anything considered natural is seen as foreign because people have forgotten how to interact with nature. Alvy wants a natural birth, but Rachael doesn’t want pregnancy to interfere with her kushy job. When she tells him, he freaks out but eventually warms up to the idea. Eventually, what seemed like a good idea in the moment, puts a strain on their marriage and changes their perspective on why nature and technology may not always be the best combination.

The Pod Generation sends a clear message that the further we stray from the natural order, the more ignorant humanity becomes. There are things people will lose if they continue to detach through technology. It is literally ruining peoples ability to connect with one another. There is also something to be said regarding what it means to give birth and who should give birth, who will have access to the proper care when all is said and done. Giving birth is so expensive, which is one of the many reasons why women are opting out of having children. There is a hint of condemnation of the U.S. medical care system which involves so much red tape, doing anything outside of the norm is frowned upon.

The cinematography by Andrij Parekh aided by Clement Price-Thomas vibrant set design created an innovative, future look that isn’t far out of the realm possibility. In most metropolis environments you can find anything you need, just like in The Pod Generation. Want therapy? You go to a pod and talk AI named Eliza. Want nature without having go outside? Go to a nature pod. Need a breath of fresh air? Go to a clean air bar. The fact that there is a solution for everything what’s troubling about all of this. The over-reliance on technology has stopped people from thinking for themselves, so it makes sense that Alvy and Rachel act bizarrely when it’s time to be decisive.

The issue with The Pod Generation too much time is spent on these characters bumbling but about instead of getting to the point a lot quicker. The shitck works for while ,but the last 30 minutes I was desperate to get to the conclusion because it had said everything it needed to say at the 90-minute mark. In addition to that, this story was a missed opportunity to address some of the queer sensibilities queer sensibilities when addressing who can have children and who is worthy of having them and raising them. But I will say that Emilia Clark and Chiwetel Ejiofor are doing brilliant comedic work with his facial expressions with his body language in physicality and her facial expressions and awkward smile. They are a good duo who have the potential to pursue future ventures together.

The Pod Generation plays out like a fever dream. Pieces of one characters’ life get strung together rather held together by dreams and visions of a different life. This is a fertility but it’s more of a warning about where we’re headed if we don’t loosen the grip on some of the technology that we as a species have come obsessed with. Especially as the film repeatedly remembers is the theme of evolution when the whole time it seems like tech keeps getting smarter while we move backward.