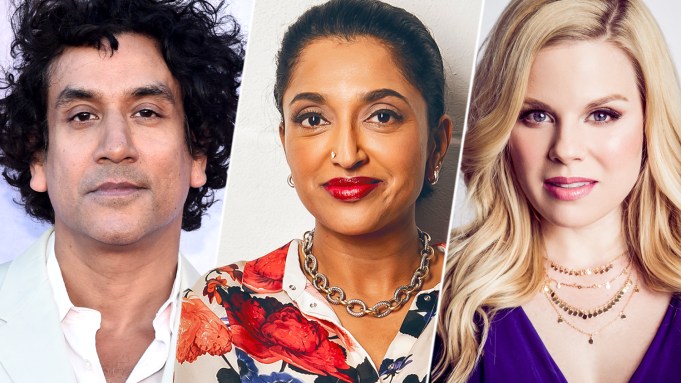 Amazon Freevee has given a straight-to-series order to The Pradeeps of Pittsburgh, an immigrant comedy inspired by the personal experiences of Vijal Patel (Black-ish, The Middle), starring Naveen Andrews (The Dropout), Sindhu Vee (Starstruck), and Megan Hilty (Smash). Sahana Srinivasan (Grown-ish), Arjun Sriram (Sydney to the Max), Ashwin Sakthivel (Smeds and Smoos), Ethan Suplee (Babylon) and Nicholas Hamilton (Time) round out the series regular cast. Pete Holmes (Crashing) and Romy Rosemont (A Million Little Things) will recur in the eight-episode half-hour series. The project had been in development at IMDb TV, which rebranded to Amazon Freevee, since 2021.

Produced by Sony Pictures Television and Amazon Studios, the modern-day immigrant story follows the Pradeep family and the humorous events of their first few months after moving to America from India.

As told through hilarious (and often conflicting) flashbacks from an interrogation room, the Pradeeps quickly find themselves embroiled—romantically, personally, and professionally—with a polar-opposite neighborhood family, leading to a predicament with many surprising twists.

“This show is from a very personal place, and explores the many facets of the immigrant struggle,” said Patel. “As my parents say, the pain got funnier over time—like wine.”

“Vijal created not only a rich world, but a highly personal look at the immigrant experience, grounded in heart and the outrageousness of real-life families,” said Jason Clodfelter, co-president, Sony Pictures Television. “We are thrilled to see his story come to life with our partners at Freevee.”

Here are the character descriptions:

Mahesh is the patriarch of the Pradeep family.  A brilliant engineer who uprooted his family to America for a business opportunity.

Intelligent and self-assured, Sudha is the matriarch of the Pradeep family, but her brewing feud with her neighbors is about to test her in new ways.

Sahana Srinivasan – “Bhanu Pradeep”
A rebellious teen trying to get out from under her mother’s thumb.Unfortunately, her rebellion gets her mixed up with the one person her mother can’t abide—the neighbor’s son.

An epic mama’s boy, he loves following rules and believes narcs are just heroes who tell the truth.

Vinod loves all things American and is excited for their new life in Pittsburgh. He’s quick to make friends, but in dealing with bullies he looks to the nonviolent tactics of his hero Gandhi.

Janice is a sexy suburban Christian who loves to preach forgiveness, but rarely forgives others.

Ethan Suplee – “Jimbo Mills”
Jimbo is a gregarious “guy’s guy” who tries to befriend the guys in the Pradeep family.

“Dark Suit” is a rookie interrogator whose inexperience and innocence drives his partner nuts.

Romy Rosemont – “Light Suit”
“Light Suit” is the lead investigator in the Pradeep case. Ready for retirement, she’s uptight and ruthless in her tactics.